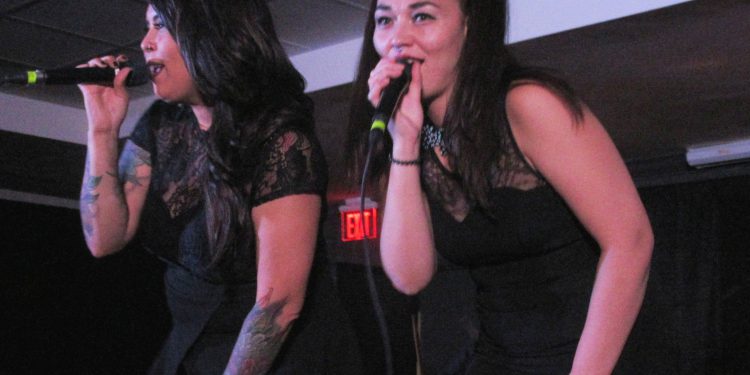 Compounding the rhythmic possibilities of throat singing, the tattooed-out duo of Silla and Rise, along with an earth-shaking drummer, stoked up enough vocal boil to melt off a few ice caps with sinuous and serious chanting that was at times elegant and intimate and then, suddenly, fiercely primeval.

The annual Folk Music Ontario conference took place Sept. 27-30 in Mississauga.  It was a chance for those who book concerts and festivals to get a look at this year’s crop of emerging talents and new projects from established acts.  Paul Corby was there, and he took lots of photos! respectfulchild created an abstract musical ecosystem with electronics, a cataclysm of pink and a rediscovery of the expressive uses to which a violin can be put. Who knew it could be a wind instrument? Burnstick had their close familial relationship shining through every note of their original set and closed with a grand John Prine tune. Ellen Froese brought the conviction of a classic folk voice and sly observational lyrics to an appreciative audience at her Thursday showcase. Urban country roared into high gear, after an a capella opener, with Johnson Crook’s high harmony blast of fresh air. The best place to lobby for recognition is, of course, in the lobby, as Even The Bird Was Free realizes. Overcome by the beauty of the music and the sincere nature of her personality many leaned in to the empathetic outreach of Anishinaabe violinist Melody McKiver. The combination of hip hop, South American kuisi and African polyrhythms certainly does demand the title of New Tradition and the wild acrobatics and break dancing that spilled out from the stage and claimed some of the audience members was just another dimension of the magic that bandleader Ruben Esguerra brought to Saturday night’s showcase. In 20 minutes!!! Just in from some shows in Barrie, Patty McLaughlin and Ginny Clements arrived breathing fresh harmony and songs of kindness into the outsider song circle. Thunder in kilts, shooting bolts of triple-malt rhythm into the crowd, Skerryvore was on it like a scotch bonnet, taking over the surrounding airspace with pipes, drums and electric bass, securing a total surrender from the lively and enthralled throng. Alex Leggett joined in on a spontaneous song circle while awaiting the Borealis reception with a tune from his eponymous new album. Kalyna Rakel sent out soul shivers into the hearts of her intent listeners. The song circle was ambushed by the surprising control and delicacy of Kristine St.-Pierre, who mesmerized the crowd (including Brian Blain, Jack Cole and Greg Torrington) with a performance of the title tune from her CFMA-nominated disc, La Promesse. Linda Saslove came to the song circle with a tune from her debut album, Everything. Rich tones of subterranean mystery brought a silence to the room as Outside I’m A Giant overflowed the expectations of the room. At the sound check for The O’Pears, the harmonic convergence of the three crystalline voices was overlaid with a galvanizing coating of good sushi. Gatineau’s A Leverage For Mountains accommodated the folk fans leaving the opening reception with a good old hallway jam. Sarah Siddiqui exposed layers of sensitivity by gifting the impromptu song circle with some tunes from her new album, No More Waiting Rooms.