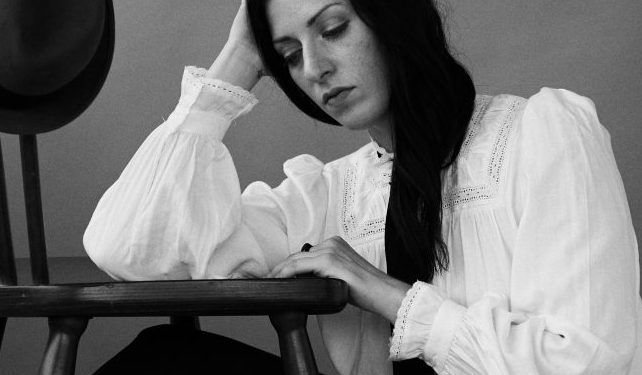 Nov. 7, 2018 will mark the second anniversary of Leonard Cohen’s death, and the passage of time has only added to the significance of his words and music. Cohen’s legacy will be celebrated that day with the release of Andrea Ramolo’s Homage, a 10-song collection of some of Cohen’s best-loved works interpreted by the acclaimed Toronto singer-songwriter and produced by Michael Timmins of Cowboy Junkies. We’re proud to exclusively premiere the album’s first focus track, “My Oh My.”

Although—like virtually all songwriters—Andrea has long been a passionate Cohen devotee, the idea to make Homage developed gradually in the wake of a stunning rendition of “Hey, That’s No Way To Say Goodbye” she performed with The Wooden Sky’s Gavin Gardiner at a Last Waltz tribute concert staged in Montreal days after Cohen’s passing. Andrea made the song a staple of her live repertoire from then on, and seemingly constant requests for a recording of her rendition eventually expanded to what ultimately became Homage.

Andrea turned to Timmins—who also produced her 2017 Polaris Prize longer-listed NUDA—to oversee the recording of Homage, which features Andrea on baritone guitar and vocals, Tom Juhas on lead guitar, Derek Giberson on keyboards, David Goncalves Gouveia on drums, and special guest Sahra Featherstone on harp. In all, Homage has been a true labour of love for Andrea, underscored by it being a fully independent release.

It has been said that Cohen’s songs truly take flight when sung by others, and that argument can certainly be made with Homage. The blending of Andrea’s mesmerizing vocals within delicate musical settings creates a haunting atmosphere unique from other Cohen tributes. Like Timmins’ own revered work with Cowboy Junkies, restraint is the key to the overall sound, offering stunning beauty and brooding tension in equal measure.

“Homage was the first time I’ve gone this deep into someone else’s material, so that presented a challenge in itself because you want to ensure that you are honouring the original artist while at the same time making the songs your own,” Andrea said. “I tried to focus on aspects of the songs that spoke to me, while also infusing my own life and character into them. As a female artist, there was something exciting about covering songs by a very powerful, iconic man, especially when time-travelling through the older tunes. During the process I often wondered if Leonard had been a woman, would the world still have come to know the songs in the same way?”

In some ways Homage is a natural progression from NUDA, which Andrea describes now as a “huge growth spurt, both spiritually and artistically.” But above all, she said the experience of making that album instilled a sense of confidence and willingness to experiment that she had never felt before, and Homage stands as an important next step in her musical journey that began with two solo albums and three years touring all parts of Canada in support of them. Following that, Andrea teamed up with Cindy Doire to form the duo Scarlett Jane, whose two albums released under Warner Music Canada were hailed by critics coast to coast and recognized with multiple Canadian Folk Music Award nominations. Andrea was also nominated for a CFMA award on her own in 2011.

“I always get an overwhelming feeling of ‘I’m in the exact right place’ whenever I get onto a stage to sing or share a story,” she said. “I love connecting with an audience; I have since I was a little girl. For this project I wanted to make sure I honoured the spirit of Leonard but also to find my own ways into the material. His words and melodies will be with us forever, and paying homage to that is just my way of acknowledging how potent they have been for me as a songwriter.”

Go to andrearamolo.com for more info.