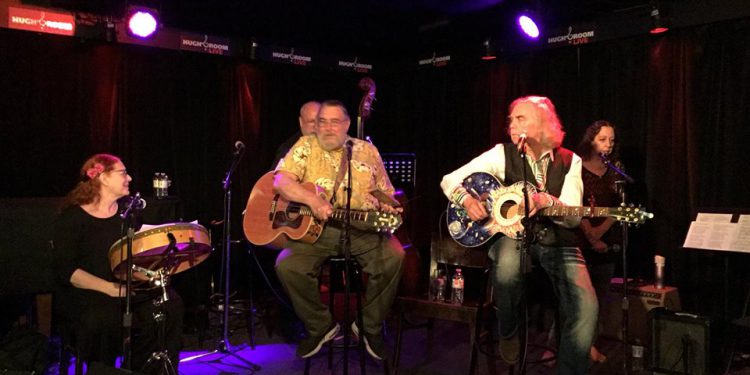 Welcome to a new series here on Roots Music Canada. Over the coming months, Howard Gladstone will be introducing us to some of the songwriters who will be appearing at his Songwriter Sessions at Hugh’s Room Live in Toronto.  Whether or not you’re in Toronto, Howard’s profiles will be a great opportunity to learn more about some one-of-a-kind song-writers.

Tony Quarrington is an in-demand guitarist, accomplished songwriter, and one of Toronto’s busiest musicians.  He will be appearing at Hugh’s Room Live in Toronto twice in the autumn of 2018 – as a singer-songwriter in the club’s fledgling Songwriter Sessions, and a month later performing his own full-length album, For King and Country, with an ensemble of talented musicians.

On Oct. 9, Tony will be one of four performers in the Songwriter Sessions, which also include David Leask, Andrea Ramolo and Melanie Peterson.  On Nov. 11, he performs For King and Country with an ensemble of performers.  The album is a collection of original songs chronicling Canada’s experience in the Great War (1914-18) and was released to coincide with the centenary of the war’s end.  It features songwriting collaborations with writer-performers Alex Sinclair, James Gordon, Arthur Renwick, the late Don Francks, Brian Gladstone and others.  Some but not all of the original performers will grace the stage on Nov. 11.

Tony Quarrington came out of the Toronto folk scene starting in 1962, playing mandolin, banjo and guitar. He haunted the clubs in Toronto’s seminal Yorkville during that storied era.   He told Neil Young that he (Tony) needed to finish high school and was therefore too young to join him on his famous and career-starting trip to California.  In an interview in Rolling Stone magazine, producer Daniel Lanois mentions his admiration for Tony’s production style.  Tony remembers listening to Lonnie Johnson at the club he operated in Toronto for a short time, and has memorialized it in a song called “Lonnie Johnson’s Home of the Blues.”

He appeared at the Mariposa Folk Festival in the “punk bluegrass” band The Gangrene Boys in 1966 with Rick Fielding.   He spent the 60’s playing folk, roots and rock, studying jazz on the side.   He toured across Canada as a guitarist in Joe Hall’s band (Continental Drift).  He dropped out of a PhD program to go on the road with Joe, leaving unfinished a thesis on Ezra Pound’s “Cantos.”

Here is a little known fact about a Tony Quarrington song: The title track of Willie P.  Bennett’s Juno award winning album Heartstrings was written by Tony.   It is one of only two songs recorded by the legendary songwriter that he himself did not write – the other being “Stardust” by Hoagy Carmichael.  It is pretty illustrious company for the well-spoken but modest Tony. It was his idea to record Heartstrings in the form of acoustic duets and his production work that helped garner the Juno award for the album.

He started playing jazz professionally in the 1980s and has since found himself in continual demand performing in that genre, while never really giving up his involvement in the folk, blues and roots scenes.   He has played blues and ragtime with Mose Scarlett and subbed in for Ken Whiteley on occasion in the famed trio that included Jackie Washington.

Tony continues to perform with many singer-songwriters and in multiple jazz ensembles while also keeping busy producing records.  He has recorded 15 jazz albums, as well as two albums of his own songs, First Set and Gathering Place: Songs of Toronto.

An album called The Songs of Tony Quarrington was released in 2016 with 16 songs by performers including Wendell Ferguson, Hotcha, Jon Brooks, Brian Gladstone (who produced the album), Laura Fernandez and Noah Zacharin, Alan Fraser and Marian Girard, Joe Hall, Stuart Laughton, and myself, Howard Gladstone.

The Songs of Tony Quarrington illustrates the depth of Tony’s songwriting and the wide variety of genres and styles he covers.  Many of the songs celebrate and explore the lives of musicians and artists including Hank Williams, Townes Van Zandt, Frida Kahlo, Diego Rivera, Jimmie Rodgers, and eccentric inventor Nikola Tesla. The songs are lyrically strong and musically engaging, and reveal Tony’s talent, intuition, knowledge of music, and just plain relentless hard work.

For God and Country is not the first concept album Tony has created.  His Group of Seven Suite, inspired by the paintings of the famous collective of Canadian artists, has been performed at the Art Gallery of Ontario and McMichael Gallery in Kleinberg.  The album’s sole vocal performance is by Jane Siberry. His song suite on Emily Carr has also been performed at McMichael Gallery, although it has not yet been recorded.

He counts among his major musical influences the major songwriters of our generation, including Bob Dylan and Leonard Cohen, as well as a series of guitarists with the initials “JH” – starting with John Herald of the Greenbriar Boys, Jimi Hendrix, who Tony claims is from another universe, and the jazz player Jim Hall.  Among Canadian jazz guitarists, Tony admires Lenny Breau, Ed Bickert and Sonny Greenwich.  He also is a huge fan of Django Reinhardt, has written a song about Django, and claims to have a picture of the gypsy jazz guitarist in every room of his house.

For a dream band, Tony would choose musicians from the world of jazz:  Elvin Jones on drums, Scott LaFaro on bass, and John Coltrane – his all-time favorite musician.  His selections are not that strange for a folk musician when one considers the musical growth of Joni Mitchell, who evolved musically performing exclusively with jazz musicians, such as Herbie Hancock, Wayne Shorter and Jaco Pastorius.   Music is music, and the best musicians in any genre are comfortable crossing the floor.  Tony mentions his recent trip to Prague, where he touched pianos played by Mozart.

“Eclectic” is probably the best word to describe the variety of Tony’s musical endeavours.  In addition to all the above-mentioned artists and projects, he has worked with Daisy DeBolt, Club Django, and the Jeff Bird Trio, as well as performing Hawaiian and Yiddish music.   The list goes on and on.

Currently Tony is working with his musical partner in Q and A, Zoey Adams, with plans to record two albums in the coming months – one an album of songs they have co-written, and the second an album of 14 original Christmas songs.  The accompanying band for both albums will be Stuart Laughton’s Radio Dial.

Tony Quarrington keeps busy and shows no signs of slowing down. His musicianship, intellect, literacy and curiosity seemingly know no bounds.

More information on the two shows is available here:

Howard Gladstone is a Toronto based singer-songwriter, and occasional writer.  He is curating the Songwriter Sessions at Hugh’s Room Live.  His website is www.howardgladstone.com

Raine Hamilton is on tour with American ...