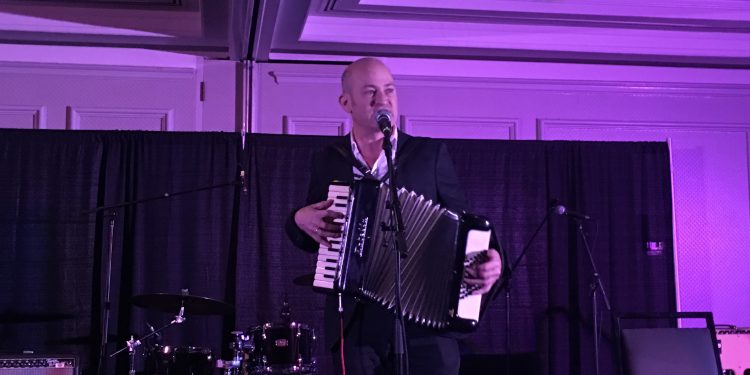 Noon – My showcase-watching for the day kicks off at the Coax Records showcase, Coax being the record label belonging to Rae Spoon.  Rae’s got an impressive roster of established acts, such as the boundary-pushing Geoff Berner and the award-winning Abigail Lapell, and some unique up-and-comers.  Principal among them is respectfulchild, who I had a chance to see a week ago opening for Rae in Thunder Bay.  Child is kicking off this showcase with more of their atmospheric instrumentals, which are comprised mainly of plucked violin loops and ambient sounds and vocalizations, some of which appear to be created by humming into the violin’s resonating chamber.

It’s the sort of music I’d most love to bliss out to in a flawlessly quiet listening room such as an art gallery.  Everyone else at the showcase apparently feels the same, as they maintain an entranced silence while Child plays.  Child doesn’t say a word during their set to break that trance.

Next Rae gets up on stage, with Child now accompanying them, and gets the crowd singing along with “Do Whatever the Heck You Want.”  It feels like the audience is needing this today.

Rae does three songs, then vacates the stage to make way for Quantum Tangle, the Juno-winning trio of Grey Gritt, Tiffany Ayalik, and Kayley Mackay.   Their powerful mixture of vocal harmonies, throat singing and atmospheric electronica gets an enthusiastic response from the crowd.

They are followed by Kym Gouchie and Northern Sky, an Indigenous roots band all the way from Prince George, whose front woman hails from the Lheidli T’enneh Nation.  The most powerful moment of their set comes when Kym picks up her hand drum and delivers an emotional introduction to the song “Cleansing the Highway of Tears,” a song she says came to her instantly from the land and from the trees the day she joined an awareness walk on the Highway for the women who have been murdered along its route.

Geoff Berner takes the stage next and articulates what I think many people might be feeling when he says that the people who performed before him have turned the ballroom into a sacred space, and he’s honored to be here.  He then launches into a hilarious song making fun of survivalists, after which he thanks the audience for allowing him to share HIS culture with them.

The final act of the showcase is Orkestar Kriminal, a band that sings songs about criminals and criminal activity, mostly in Yiddish (some in Russian, Greek, Spanish and Pashto) and certainly not in either of Canada’s official languages.  The orchestra’s array of instruments include sousaphone, accordion, saw, trombone, clarinet, bouzouki, drums, bass and vocals.  While it’s tempting to view the act as a novelty of sorts, it becomes clear as the set progresses, that this is about celebrating the music of impoverished peoples from history who were driven to crime; it’s not about celebrating badassery per se.

3:00 p.m. – I arrive at the Indigenous artists showcase in time to catch Jason Burnstick’s new project with his wife, Nadia Guadet Burnstick, which they are, appropriately enough, calling Burnstick.  Nadia is a beautiful singer, and their harmonies are absolutely gorgeous.

Next up is violist Melody McKiver from Sioux Lookout, who is charming and confident on stage and whose compositions recall the late Oliver Schroer’s innovation on violin.  In introducing one piece, Melody describes her day job working with youth in Sioux Lookout who have to leave their reserves to attend high school – they’re still experiencing residential school today, she says – and talks about how Canada is still reckoning with the truth part of truth and reconciliation.  She pours so much emotion in to the piece she has to stop at one point to ask for a tissue.  The audience is equally moved, and I can feel tears welling up in my eyes as Rae Spoon returns to the room with a package of Kleenex.  It’s been a hard week at the day job, Melody explains before finishing the piece triumphantly and carrying on with her set, earning enthusiastic applause at the end.

The final act of the showcase is Jay Gilday, younger brother to Juno-winner Leela and a guitar-playing singer-songwriter with a powerful, versatile voice that packs a lot of emotional punch.  He is also, it turns out, a whistler to rival Roger Whittaker.  No shortage of talent in this Gilday family, that’s for sure.

4:30 p.m. – Shmooze time!  After a very enjoyable glass of wine with Alyssa Wright from Take Note Promotion, we both head to the Borealis Records reception.  Bless Borealis for holding this event every year.  It’s a dedicated block of time where people can actually hang out and chat in relatively tranquility – they usually hold a visual show of some kind, but no music – without the nagging feeling that they should really be somewhere else watching something.

8:15 p.m. – The official showcases kick off in Mavis with New Tradition Music, an Afro-Columbian outfit that fuses traditional musical influences with a bit of Latin jazz, hip hop and electronic music.  From the word go, they have the audience in the palm of their hand, singing along and waving their hands in the air on command.  But the real calling card of this act is the dancing.  You’d swear more than half of the band are World of Dance alumni.  Nearly every song, they were out in front of the stage, tearing it up, and for the last song, they grabbed a few audience members to join in, at which point, several more jumped up too.  What a way to kick off the evening!

9:15 p.m. – Since I’d already seen the two artists showcasing at 8:45, Campbell Woods and respectfulchild, I return to Mavis at 9:15 for Silla and Rise, who describe their sound to the audience as “alien hip hop.”  Actually, it’s a trio consisting of two throat singers and a drummer playing a drum pad set up with some ambient sounds and notes.  Their sound ranges from something close to traditional throat singing with only the timing being different to numbers that see them reciting spoken word poetry over a lush, dreamy musical backdrop.

“We usually don’t play rooms full of chairs,” Shreem tells the audience as he gets up on stage for his set.  Shreem is a DJ who remixes Celtic music and has a long history of working with Ashley MacIsaac.  I’d listened to his stuff when previewing the Stan Rogers Folk Fest, and I knew he was good, but I wasn’t expecting him to be this good.  The trouble with DJs is they aren’t always much fun to watch, but Shreem isn’t just a DJ.  He beatboxes and plays percussion – a drum pad and shakers tonight – and he performs with fiddler and step dancer Emily Yarascavitch.  The sheer variety of the set, the constant motion between fiddling, beat boxing, step dancing, and drumming, and Shreem’s high energy gyrations and fun personality make the show irresistible.  At one point, he introduces a mashup of the Fretless and A Tribe Called Red, the former a Juno-winning classically-trained Celtic music ensemble, the latter a Juno-winning electronic pow wow ensemble.  It was awesome.  By the end of the set, I am indeed wishing there were no chairs in the room.

10:15 p.m. – Johnson Crook open their set with an a cappella number in perfect four-part harmony before counting into a high-energy country rocker.   This is one tight roots rock outfit, featuring acoustic and electric guitars, upright bass and drums – one hell of a drummer actually – and those harmonies!

10:30 p. m. – Juno-winning Mexican-Quebecois artist Boogat takes the stage in the York Ballroom and, before long, people are dancing at the side of the stage to his ensemble’s blend of Latin American musical styles and hip hop.  This is the third time in two days I’ve described a band as blending those two sounds, but none of them sound remotely alike.  What sets Boogat apart is that his ensemble, comprised of guitar, bass, trombone and percussion, is entirely acoustic and organic – no DJs mixing it up.  About halfway through the set, Boogat informs the audience that we’ve all been sitting for about 15 minutes now, and doctors say that sitting for more than 15 minutes at a time is bad for you, so he implores us all to stand up.  The audience dutifully follows orders, the side-stage dance floor fills up considerably, and a good time is had by all.

Les Poules à Colin, all dressed in white, close out the night.  The band, whose members include Béatrix Méthé, the daughter of iconic Quebecois musician Claude Methé, perform both traditional songs and tunes and originals that build on tradition, and their arrangements borrow from a variety of contemporary styles.

11:30 p.m. – It’s time to head to the second floor of the hotel tower, which has been transformed into “showcase alley” for private showcases. FMO provides a program showing who is playing in each room at what time, but it’s impossible to choose who to see.  Typically, if you recognize the names on the bill, you’ve already seen them.  If you don’t, they’re a complete mystery, and you have no way of knowing whether they’re fabulous or downright terrible – or somewhere in between.

This year, I decide to try a novel approach to selecting acts:  I put the suite numbers in a list randomizer and have it spit out a list of where I should go each half hour.   Congratulations Brian Litvin and Jabulani, Ariko, Ian Foster, and the Trads.  You win the raffle.

The highlight of these selections is Ariko, a trio comprised of Kelly Lefaive of the group Georgian Bay and her sisters Jill and Nicole.  They fiddle, they step dance, and they sing in gorgeous three-part harmonies.  What’s not to like?  Ariko are hardly new on the scene, so many people likely already know how great they are, but for those that don’t, they’re a fabulous act to discover.

A close second on the highlights list is Brian Litvin and Jabulani.  Brian is originally from Johannesburg and performs songs in genres known as Township Jives and Zulu Maskande.  It sounds great.  He’s a powerful vocalist.  And he closes his set with a cover of Johnny Clegg.

2:58 a.m. – Time for bed!   It’s been another incredible FMO.  Tomorrow, Bill Garrett will be honoured with a special breakfast, and then we’ll be on our way until next year.