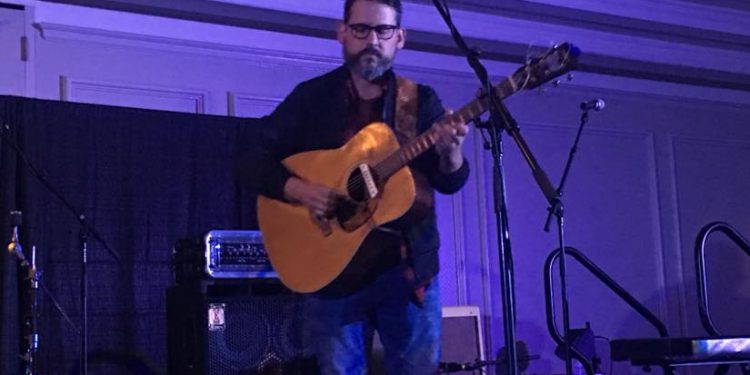 8:45 a.m. – I arrive at the Hilton near the Toronto Airport already exhausted after getting up at 4 a.m. to catch my plane. The hotel can’t check me in until after noon, but there’s a breakfast buffet for conference-goers in one of the ballrooms. I load up a plate and start catching up with the old friends I already see in the room. It’s been 25 years since I first started working in the music business – not including the time I spent in commercial radio – and 21 since I moved into the folk/roots milieu specifically. Folk Music Ontario is like a family reunion.

10:30 a.m. – The first workshop block of the day features a session on preventing sexual assault and sexual harassment at festivals. I’m going to summarize this session in a separate piece, so I’ll leave it at this for now.

12:30 p.m. – I finally have a hotel room – and a very nice one, thank you very much. I want to go watch the Scottish showcase and catch some of Eve Goldberg’s song swap. But I NEED a shower and a nap. Practicality wins out, and I opt for the latter

4:10 p.m. – Doris Folkens, whose album the Moose was quite enamored with earlier this month, texts me to arrange to meet up. We connect a half hour later in the export development suite, where we can help ourselves to free tea and coffee – as opposed to the five dollar tea in the restaurant – and servers are coming around offering us hors d’oeuvres. Until this meet up, I really knew nothing about Doris, other than that her album is lovely. But her story is fascinating. By day, Doris tells me, she is a physiotherapist who played music for years as a hobby when she was living on the west coast. But then family needs forced her to quit her job and move east, so she decided to take the opportunity to get more serious about music. She studied at Berklee online. She is still working as a physiotherapist by day, but she’s also teaching songwriting workshops and promoting her debut album. If you ever need a physiotherapist in Guelph, maybe look Doris up.

Jorge Miguel of Jorge Miguel Flamenco joins Doris and I for a while and tells us he’s working on a new single and video with his teenage son, who is apparently a monster musician. I can’t wait to see this!

5:30 p.m. – The evening showcases start with the Folk Music Ontario Awards showcase. It features the winners of the Stingray Rising Star awards, the Folk Music Ontario Songs from the Heart awards, and the Colleen Peterson Songwriting Award. Each act gets two songs, which doesn’t give you much chance to get to know them, but here’s a recap.

Stingray Rising Star Award winners the O’Pears are a three-part female vocal harmony ensemble who open their two-song set with an a cappella number called “The Candle Burned” before closing with the award-winning number “Quiet Now.” Given the popularity of acts like The Wailin’ Jennys and the Good Lovelies, the words “three-part female vocal harmony ensemble” really tell you all you need to know about this group’s potential appeal.

Shawn William Clarke plays his instrumental “Bellwoods Park” next, which won the FMO Songs from the Heart award for instrumental music. He also plays a vocal number and succeeds in getting the audience singing along.

Darrelle (pronounced like Daryl) London won the Songs from the Heart award for children’s music, which means that I, as an adult, expect to be bored during her two-song set. But it ends up being one of my favourites of the showcase. It turns out that her award-winning song “Sing to the Moon,” from her lullaby album of the same name, is not some weirdly pleasing anomaly on an album otherwise filled with nausea-inducing tunes about – whatever kids songs are usually about. Polkaroos? The second song she sings, “Sheep,” is just as charming and beautiful as the award-winner. When you add in the fact that Darrelle also has an absolutely lovely, slightly quirky, singing voice, you get a captivating mini-set.

Next up? Songs from the Heart roots award winner Campbell Woods, who sings his winning song “Picture of You,” along with a number called “For You,” which he describes as being “from the liver.”

The Songs from the Heart winner for political songwriting is Missy Bauman’s song “Two Sisters,” a haunting account of sexual assault. In fact, that’s the only song Missy is singing on stage because she badly cut her finger with a blender and can’t play guitar right now. Annie Sumi stepped in to accompany her on the winning song, and the crowd responds to Missy’s raw, brave, number with a lengthy round of applause.

6:20 p.m. (ish) – The showcase is actually running early, so host Christa Couture declares an impromptu intermission while we wait for the next acts.

6:30 p.m. (ish) – Lenka Lichtenberg takes to the stage to perform “Sleep Baby Sleep,” the winner of the Songs from the Heart world category. I, unfortunately, miss her second song, as I have to make a brief trip to my hotel room to fetch my phone charger. The phone I am uploading photos to Facebook with is rapidly running out of juice.

Tragedy Ann won TWO Songs from the Heart awards for songs from their new album, one for blues for the song “Neon and Velour,” and one for humour for the song “Snooze.” This means they get to play a whopping four songs on stage. The inventive duo of multi-instrumentalist Liv Cazzola and guitarist Braden Phelan play with a kind of laid back, fun vibe, and Braden bestows upon the showcase the inaugural award for punctuality.

The showcase closes with Coleen Peterson Songwriting Award winner Lora Bidner, whose 2015 debut album To the North is possibly one of my favourite debuts ever. She closes the show with her winning song, “3,000 Volts,” a chilling number about a woman facing the electric chair for murdering her abuser. I leave the showcase suite with goosebumps.

7:15 p.m. – There’s a one-hour break before the evening showcases start. Having run into my old friend Tom Coxworth of CKUA Radio’s Folk Routes show, I join him for a drink in the hotel lounge. We lose track of time and end up missing the opening sets of the official showcases. This is a constant hazard at FMO, where the desire to see as much music as possible competes with the desire to catch up with the dozens of old friends you only see once a year.

9:15 p.m. – Our first stop is the York Ballroom, where we catch a bit of Zachary Lucky. I’ll be the first to admit I’m not a huge fan of straight-up country music the way he serves it, but he’s got a few things going for him that are downright appealing. He looks like Tim Hus, he sounds like Gordon Lightfoot, and he’s got a great personality on stage. At one point, he explains that he’s from Saskatchewan but he moved to Ontario, “but that had nothing to do with meeting a girl …”

9:30 p.m. – After Zachary, we move over to the room known as Mavis to catch a bit of Big Little Lions, the duo of Helen Austin and Paul Otten. Honestly, I would buy a concert ticket just to listen to Helen talk for 90 minutes. Ever since I saw her win the Juno award for children’s music in 2014 and give a charming and hilarious acceptance speech, during which she thanked her husband “for having a real job,” I have not been able to get enough of this woman’s personality. And I am not disappointed tonight.

“Paul’s from Cincinnati, Ohio. I’m from Vancouver Island. We do it for convenience,” she says at one point.

At another, she cheerfully explains to the audience that she and Paul are not a couple, that they are both married to other people, and that, if promoters want to book them, they will need separate beds.

I would be remiss if I didn’t mention that their music is also fabulous – catchy folk-pop songs, great harmonies, and a fascinating arrangement that frequently sees Paul playing keys with one hand and drums with the other. Now that’s multitasking!

9:50 p.m. – Tom and I return to the York Ballroom just in time to see the end of Cy, a Franco-Nova Scotian band performing what sounds to my ears like an innovation on Celtic and traditional Quebecois music. When we first walk in, one of the mandolinists is playing what sounds like a pipe tune as a mandolin solo, which sounds pretty darned cool. They close the set with a rocking, high-energy number that leaves me wanting to hear more.

10:00 p.m. – Leaf Rapids take to the stage with guest Madeleine Roger of Roger Roger on backing vocals. Keri and Devin Latimer, previously of the Juno-winning group Nathan, are already veterans of the folk scene with nothing really to prove, and Keri makes this whole showcasing thing look easy by singing a set of gorgeous songs with that divine voice of hers.

Leaf Rapids’ debut album was produced by Steve Dawson, and, as we watch the band set up, Tom comments on what an amazing producer Steve is. We decide that the two of us should make a record with Steve Dawson because we’re pretty sure he’d do such a great job that people would barely notice how severely lacking in talent we are.

10:30 p.m. – Tom leaves me to head for bed. I’m determined to stick it out to the end. Gabrielle Papillon is next, and her modern folk songs drenched in lovely string arrangements prove to be worth staying up for.

11:00 p.m. – I’m so glad I stayed awake long enough to watch Los Poetas close the Friday night official showcases. This is the kind of act that will be rocking festivals a year from now. Comprised of a DJ, three vocalists/MCs, a bassist, and at least two percussionists/multinstrumentalists – was that Luis Orbegoso I saw on stage? – the ensemble mix Latin music and hip hop into a high-energy performance that keeps the dwindling crowd awake and at attention..

11:30 p.m. – I stop by the private showcase floor for a quick look, but who am I kidding? If I don’t get to my hotel room and write up this here recap, I’m going to fall asleep before I get it done. I’ve been up since 4 a.m., and I need to pace myself. There’s another day of this left to go.