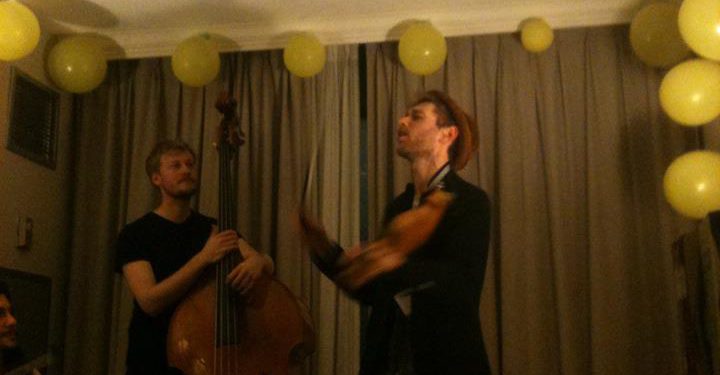 Jaron Freeman-Fox showcases in a hotel room at the Folk Music Ontario conference in 2013.

Have you ever wondered how folk festivals choose all the artists that play there each year?

I mean of course the headliners are picked based on their ability to sell tickets.

That is, after all, why you see pop stars like Feist at the top of some bills.

But what about those crazy great acts you discover on the side stages?   How did the festival hear about them?

Some of that, of course, comes down to old-fashioned listening to music.  But at the end of the day, presenters really want to see artists perform live before they pony up the big bucks to hire them to do just that – and that’s where conferences like Folk Music Ontario come in.

FMO – why couldn’t we have shortened it to “Folk-ON” guys?  Don’t you think that sounds cooler? – is kind of an all-purpose music conference for the entire Canadian roots scene, and one of its key components is artist showcases.  Those are generally 20-minute performances, one after the other, that give concert promoters a chance to see four or five artists in the time frame normally reserved for a regular concert.

At Folk Music Ontario, there are two types of showcases: official ones and unofficial ones.

The official showcases happen during the day or earlier in the evening and typically take place in the host hotel’s conference rooms and ball rooms.  They feature artists selected by FMO itself.

The unofficial ones take place – um – all over the place and feature whichever artists were first to rent the space.   Some are in conference rooms.  Others are in the hotel rooms themselves.  Typically FMO’s host hotel blocks off two floors of rooms for this exact purpose.

Indeed, nighttime at FMO is a veritable pub crawl contained within a hotel.

Conference-goers ride the elevators from floor to floor and hop from room to room in an effort to catch everyone they want to see.

Artists and their personnel spend their days handing out flyers, putting up posters around the hotel, and doing whatever else they can think of to draw conference-goers to their particular suites.  They often provide free drinks and snacks as extra enticements, adding to the pub crawl vibe.

It’s a grand time that lasts well into the wee hours of the morning for those who have the stamina to stay up that late.

And for those who manage to get up in the morning?

Well, there’s a whole range of daytime programming to choose from – everything from workshops on things like accessibility at festivals and building a house concert touring network to networking sessions for women in music.

And there’s a mentorship program that pairs young artists with seasoned pros.

Watch this space for sneak peaks at who might be hot on the festival circuit next summer.