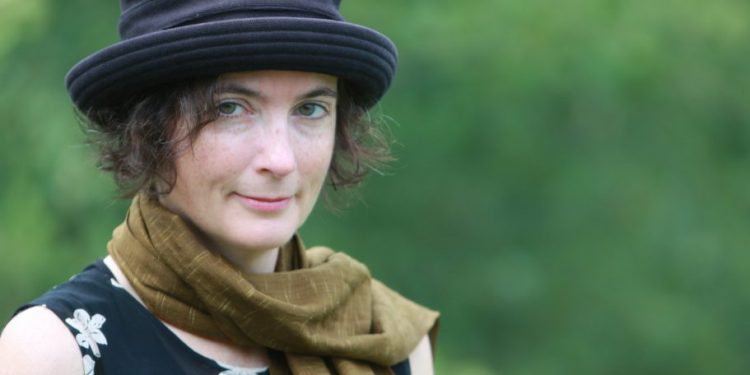 Reflecting back on the past 20 years, 2017 Juno nominee Maria Dunn feels much gratitude at being able to earn a living doing what she loves to do. Her career has allowed her to travel the world, collaborate and/or perform with artists that she admires, and develop her music in so many different ways.

Maria also relishes having met and worked with artists in other disciplines (writers, poets, visual artists, filmmakers, historians) who have shown her that she could have an important role as an artist working in her community.

“Not only is this role rewarding in terms of feeling rooted and valued in my community for the skill and inspiration that I can offer as an artist,” said Maria, “this grounding gives me richer material to share with people in other parts of the country and the world when I make and release my recordings and when I go on tour.”

What were highlights for you over the last 20 years?

MD: Highlights over the past 20 years have included kicking off the Edmonton Folk Music Festival’s main stage in 2002, following my 2002 Juno nomination for the album For A Song. The trip to St. John’s, NL to celebrate the Junos that April 2002 was particularly memorable, including sightseeing with fellow nominee David Francey before the gala dinner (where David won the Juno!).

Another highlight was being interviewed and performing live twice on BBC Scotland’s Travelling Folk (2002-2003) for wonderful Scottish musician, songwriter, singer and broadcaster Archie Fisher. Another particular thrill was Archie Fisher inviting me to perform my own song Take it Easy on Me with him on stage at the Royal Concert Hall in Glasgow for Celtic Connections.

Superb Irish singer Niamh Parsons recording my song “The Peddler” is another highlight, as was the opportunity to perform an opening set for, and two songs with, the legendary Andy Irvine (Planxty, Patrick Street, Usher’s Island) for three concerts in Ireland in 2015.

The successful 20-year run of The Christmas Carol Project, an Edmonton songwriters’ homage to Charles Dickens’ A Christmas Carol, in which I played the part of Tiny Tim Cratchit and sang my song “God Bless Us Everyone”(another thrill that this song is also included in the Rise Again songbook), including touring the show to several western and northern Canadian theatres.  We performed twice at The Winspear, Edmonton’s premier concert hall. An abbreviated version of the live show, The Carol Project, was also filmed and aired on Bravo-TV.

My multimedia show collaborations with historian/videographer Don Bouzek, including GWG: Piece By Piece (with historian Catherine Cole) and On The River (with Indigenous women’s trio Asani).

The 2016 Edmonton Music Prize and 2017 Juno nomination for my most recent album Gathering.

Any special moments that stand out for you?

MD: Singing “Shoes of a Man” (From Where I Stand), the song that I wrote about my grandfather’s life in Glasgow at the Celtic Connections Festival in Glasgow, with many of my Scottish relatives in the audience. Singing “Can You Blame The Poor Miner?” (my song from We Were Good People inspired in part by the Hillcrest Mine Disaster of 1914) in the actual Hillcrest Miners’ Hall at the 100th anniversary commemorations of the disaster.

Being honoured to sing my song “In The Shadow of the Rockies” (We Were Good People) at several 100th anniversary commemorations (including the official Canadian Government dedication of the Internment Museum in Banff, AB) of the unjust internment of Ukrainian Canadians and other so-called “enemy aliens” by the Canadian government during WWI.

Any tours that were magical for you and why?

MD: July 2006 Smithsonian Folk Life Festival in Washington, DC. Participating with many wonderful fellow Alberta artists to represent our province at this world-class festival. Being in such an iconic area of that city for two weeks.
Several tours in the Netherlands with Mc-Ent Management. Beautiful theatres and folk clubs and appreciative new audiences, plus the experience of travelling to many lovely cities in that country.UK/Ireland tours in 2015/2017 – not only some wonderful people and folk clubs, but the opportunity to spend the few days or hours of downtime hiking various gorgeous coastal paths in Ireland, North Yorkshire, Wales and Scotland.

March 2017 tour of NY State – Triple-bill tour with legendary US songwriter and labour activist Si Kahn and wonderful fellow US folk songwriter Joe Jencks. I have known of Si Kahn’s beautiful songs (“Aragon Mill,” “What You Do With What You’ve Got”) since my first years as a campus/community folk DJ back in the late 80s, so I was honoured to share the stage with him. Joe is a superb singer and songwriter and he and I both write songs inspired by people’s history, so it was a treat to perform with him (and we are continuing that collaboration for future double bill tours).

Which artists have you shared a stage with that you always wanted to meet?

MD: I am a huge fan of The Proclaimers and was asked to host a Summerfolk festival side stage with them five years ago. Also on stage were the legendary Scottish singer/guitarist/songwriter Archie Fisher and gifted Canadian artist Kathleen Edwards, who I had previously met. It was such a thrill to meet The Proclaimers in person for the first time, although much harder to focus on hosting a workshop when you are a bit starstruck! In the Scottish vernacular, they are “pure dead brilliant!!”

For this 20th anniversary concert, special guests from Maria’s two-decade career will join the celebration!

In it together: what I remember most ...