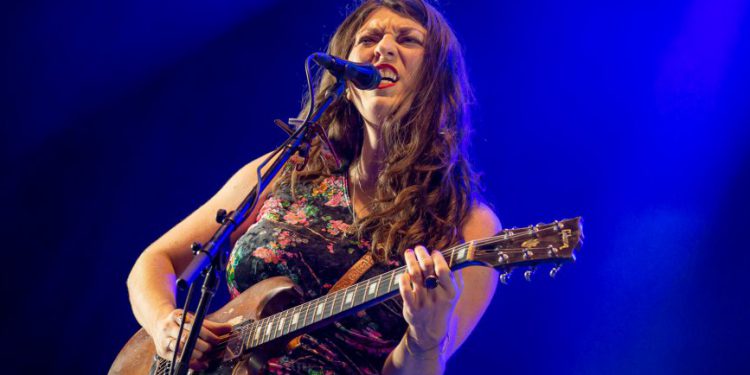 Last week was hot – sweltering, muggy, sweating-just-standing-there hot. We both donned t-shirts and shorts to prepare for the steamy days ahead.

And boy, did this year’s CityFolk Festival in downtown Ottawa deliver great music.

On Wednesday night, the crowd was ready for the week of shows to begin. The energy at Lansdowne was palpable, as beer vendors, 50/50 ticket sellers, and audience members young and old circled throughout the park cheering and hollering.

Icelandic band Kaleo started off the festival with a bang as they took to the stage. The gruff, bluesy soul that filled the sound system was a pleasant surprise. Lead singer Jökull Júlíusson defied the vocal charts time and time again, beginning the show with his characteristic tenor crooning, then shooting up to incredibly high notes, with the band following his pace and energy. Their set was simple and unassuming, but they never did any number by half – it was all or nothing. Using striking guitar solos, powerful percussion, and a certain Icelandic charm, Kaleo brought the energy to shake all of us out of our mid-week stupor. Next up was the Tedeschi Trucks Band, all the way from Florida. With a trumpet, a trombone, a saxophone, and several back-up singers, this 12-piece ensemble filled the stage both physically and musically.  Susan Tedeschi herself grabbed everyone’s attention when she walked to the center of the stage with her guitar in hand and began to sing, commanding artists around her into a team of polished and tightly coordinated performers. It’s rare to see a strong female presence commandeering the musical space around them, much less headlining the opening night of a festival.

For their first few songs, it was just Susan behind the mic with the chug of guitar behind her. While her vocals were strong and the guitar offered some great riffs, the sound was somewhat flat; there seemed to be a missing link that would pull the tunes from “good enough” to rocking.

It was when the horn section joined in on the action that the band really began to shine. The band finished up their set with Ray Charles’ classic hit “Let’s Go Get Stoned.” The wailing saxophone and bright trumpet solos pierced the night sky and had us stopped in our tracks, swaying along from across the canal. Thursday night, undeniably, belonged to alternative music superstar David Byrne – although, there were many other notable acts as well.

To begin, Andy Shauf played to a packed house inside the Horiculture building at Lansdowne on the Raven Claw stage.  The vibe flowing through the audience was both relaxed and excited as Shauf hit them with his mellow surf rock songs.

On the big stage outside, Ani DiFranco played to another large crowd with the accompaniment of a backing band made up of guitar, bass, piano, and drums. Ani’s blend of gritty News Orleans rock and softer singer-songwriter tunes kept the audience on their toes.

Of course, David Byrne’s performance was the crowning jewel of the night. This was established from the word go, as a crew member entered the stage only to place a prop of a brain on an empty table at the center. This must have been the most original of all the stage entrances throughout CityFolk’s entirety.

From that point onwards, the show continued on in a completely choreographed and meticulously executed fashion. A large and diverse ensemble including band members on guitar, bass, horns, and strap-on drum kits entered alongside Byrne, all clad in grey suits, and they never stopped moving throughout the entire hour-and-a-half set. There was a mixture of tunes off Byrne’s new album with the occasional classic Talking Heads songs sprinkled in, such as “Burning Down the House,” “Once in a Lifetime,” and “This Must be the Place.” Friday night marked the halfway point in the CityFolk pantheon, and it offered up some unexpected powerhouse performances.

The pleasant surprises started with William Prince, an Indigenous singer-songwriter from Manitoba who took to the Raven Claw stage with what began as a small audience. With only a chair and a guitar, William looked like an unassuming act, and he was indeed initially overshadowed by the raucous Allan Rayman performance that had drawn fans to the larger stage.

However, once he began to play, William’s wonderful poetry and simple guitar naturally drew audiences into the more intimate space and worked almost as a time for quiet reflection. He sang songs about his memories growing up and about his hopes and dreams for his children.

There was no pretense, nothing grandiose involved in William’s set. He seemed to play what he wanted to, as opposed to panning out to the audience, yet this worked in his favour. Audiences were visibly moved by his heartfelt lyrics and humble nature. The intimacy of the inside venue added to the quiet folk atmosphere William created, and he held his own against the excitement from outside.

His was the first noteworthy performance of the night.

The second was that of Nick Murphy (also known as Chet Faker), who offered a blending of music into one solid soundscape that captured the audience’s attention from start to finish.

Special recognition of the technical work that night should be made. The light show surrounding Nick’s music was perfectly timed and executed, with strobe lights pumping brilliantly one minute, as the band crashed away on their instruments, and a softer spotlight illuminating only Nick as he played at the piano the next. When music, lights, and effects are executed with clear precision, it takes a show from simply an exercise in listening to a band to a true immersive performance. Saturday was the night for the youth, as teenagers and young adults came out in waves to see the king of folk pop himself return to the stage after a hiatus – Irish crooner Hozier was back.

However, the night deceptively opened as a blast from the past as both Michael McDonald of the Doobie Brothers and a Gene Clarke tribute band had audiences grooving to 20th century sound waves.

Michael McDonald set the mood with his soft rock played on a grand piano and smooth vocal performance. A tranquil prelude to what became a crazy night, Michael paid tribute to the late great Queen of Soul Aretha Franklin, making sure the legends who came before him got their due respect.

Meanwhile, another tribute was being made on the second stage, albeit with a more country-inspired twist to classic ‘60s rock. Kai Clark, the son of the late Byrds band member Gene Clarke, infused some of his father’s best-known songs with a roots and country vibe to make them more accessible to CityFolk patrons.

As the time grew closer for Hozier to perform, there was a sharp energy shift. The mellow mood set by Michael McDonald quickly turned into an excited buzz. It was a tight push to claim a spot in the hordes of young people, everyone nudging and squeezing their way forward as best as they could to claim a place in the front of the crowd.

When Hozier entered into the spotlight, the resulting electric current that sprang through the crowd was immediate. Fans called out and cheered loudly as the backing band took its positions, and once the opening chord was struck, the path was set. Hozier had made his triumphant return to the stage, and the Ottawa music audience was the first to witness it.

While Hozier’s musical performance lived up to expectations, his stage persona added immensely to his overall sound. Between songs, he spoke softly to the crowd, thanking us profusely for our enthusiasm. He grinned and grew bashful whenever there was a roar from the fans. Whether it was his Irish brogue or his shy smile, Hozier successfully wooed the crowd with his charisma. To top it off, the sound of his band was amazing and had no trouble filling the park from front to back with the sounds of hits such as “Take Me to Church,” “From Eden,” and “Work Song.” What better way to close out a great week of music than with a homegrown roots blues act?

The masterful guitar work of Terra Lightfoot, a young woman from Hamilton, Ont., got the blood pumping Sunday night. Terra is no stranger to the Ottawa music scene, and she has played internationally as well. She had nothing but a bassist and a drummer to back up her voice and guitar on the grand City Stage. Yet their sound was full, electric and consistent despite the limited number of instruments at their disposal.

Terra’s clear voice floated above her complex guitar medleys and was given a firm spine by the rhythm section. Story-telling and memories of the city helped Terra win over the local audience as she reminisced about her time along the canal after playing at various hot spots around town.

While Terra delivered a great show to start off the night, The Decemberists were what many people had come to see.

This folk-rock act from Portland, OR comes from a solidly roots/folk background.  However recent albums have seen them mixing this style with New Wave and electronica themes to create a wholly-new sound.

To put it simply? That musical risk really paid off.

The band started off with their new music, getting the crowd dancing while a giant skull banner with swirling eyes flashed behind them. Lead singer and guitarist Colin Meloy was in great form, letting his strong musicianship shine through while occasionally throwing guitar picks into the audience. Piano/organ/accordion player Jenny Conlee was also a highlight of the show, as her energy matched her amazing capabilities on the keys.

In a fitting conclusion, the band ended their set with a folky favourite, “Sons and Daughters.” They motioned to the crowd to sing along until the CityFolk festival became a blend of the act and the audience, creating sound together. It was a magical moment to both witness and be a part of.

And with that, the 2018 CityFolk festival reached its end. No doubt countless people left the park that night not feeling tired, but feeling fulfilled after five nights of great performances. The Decemberists. Photo by Mark Horton.

Ottawa CityFolk: a photo album in ...