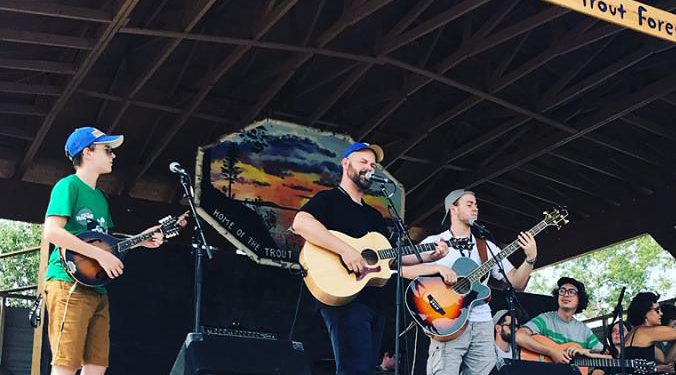 There are few things more uplifting in life than seeing a dad and his teenage sons making music together and looking like they’re having the time of their lives.

At least that’s how it feels to watch a Janzen Boys show.

Performing together on a workshop stage in August at the Trout Forest Music Festival in Ear Falls, Ont., dad John Janzen and his sons Simon, 17, and Mick, 13, took a few good-natured pot-shots at each other between their well-crafted original numbers, which are punctuated with breathtaking three-part harmonies.

“We call this Simon’s theme song,” John joked, while introducing a song called “Couldn’t Get the Girl.”

You might think this sort of comment from a parent would make a teenager cringe, but Simon insists that being in a band with his dad is “pretty cool.”

The tight-knit relationship between father and sons might have something to do with their unusual history; they spent most of their lives together in Japan.

As a young man looking for adventure, John – who grew up in rural Manitoba on a steady diet of the Oak Ridge Boys – brought his wife and then-one-year-old Simon to the country at the behest of an old friend who was working in the entertainment industry there and wanted to form a band.

He taught English by day and conspired by night to get his children hooked on music.

Simon took first to drums and then to bass.

Mick got hooked on mandolin.

When they moved back to Canada in 2012, in part because of concerns that Simon was losing his English and in part because of John’s mother’s declining health, Simon bugged John to apply for a busking license so the duo could busk at the Forks Market in their hometown of Winnipeg.

“Mick was feeling kind of left out because it was always his idea that we were going to have a band one day, and he couldn’t believe we were going to do this thing without him,” John said, “But he wouldn’t sing at the time.  And so I kind of made a bargain and said, ‘If you start singing, and we can sing harmonies, then you’re in the band too.’ And boom, that got him singing, and –”

“The rest is history,” Simon interjected, finishing his dad’s sentence.

Since then, the Boys have played a number of festivals in their home province of Manitoba, performed at a friend’s festival in Kimberly, British Columbia, and done several Fringe Festivals as part of a children’s folk opera they created called Blink’s Garden.

Over the coming year, they figure they’ll apply to a lot more festivals and possibly record a full-length album to follow up their four-song EP, said John, who currently works for a Winnipeg homeless shelter when not touring with the Boys.

They’re also starting to write as a team, rather than relying solely on John’s seemingly formidable talents as a composer.

And there’s even a fourth Janzen Boy, currently eight years old, waiting in the wings to make his debut.

So far, they said, nobody is planning to leave the band for greener pastures.

“Eventually this can hopefully replace a job, but we’ll see how that goes eh?”

If there’s any justice in the world, that plan will work out just fine for Simon.

Have a listen to two of the Boys’ beautiful songs here.

And the nominees for the Canadian Folk ...