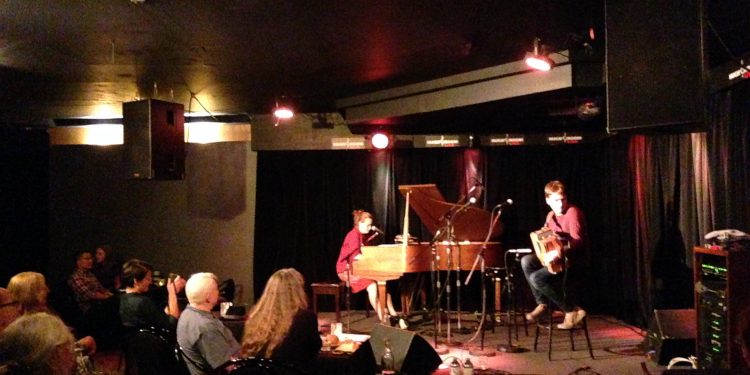 The highly accomplished pianist and fiddler Emilyn Stam has done it yet again, but this time, in partnership with Filippo Gambetta, the exceptionally talented diatonic accordionist from Genoa, Italy.

Emilyn, who hails originally from Smithers, B.C., but now makes her home in Toronto, was mentored by the late innovative improvisational fiddler and composer Oliver Schroer, whose composition Shorelines became the title track on this new CD.

Both Emilyn and Filippo learned the tune as youngsters and fell in love with its lyricality.

Shorelines was inspired by the shape of a coastline; it’s what results when you interpret the shape of the land as notes on a musical staff. It links the driving force of fiddle music with the irregular rhythms of nature. That’s a pretty fascinating idea from the genius brain of Oliver Schroer, and in the hands of Emilyn and Filippo, arranging it for fiddle and accordion, it’s just a total delight to listen to.

The evening concert at Hugh’s Room Live was wonderful. We heard music from Western Europe: mazurkas, bourrées, polskas and polkas, schottisches, tarantellas and waltzes.  There were Scandinavian influenced tunes, too. A good percentage were tunes made for dancing, some traditional music, some original compositions from both Emilyn and Filippo, who independently brought their writing talents to this incredible partnership.

Filippo’s instrument is known as an organetto in Italy. We know it here as a diatonic button accordion.

Said Filippo, “It has a sparkling rhythmic character,” which makes it ideal when playing for dances.

Fresh from the Big Branch Bal Folk camp weekend, both Emilyn and Filippo were still recovering from playing for the dances at the camp, which often lasted until around 3 a.m. And now, the duo is on tour, with gigs all over Ontario. No rest for these wicked players.

The Hugh’s Room concert was well attended by Bal Folk dancers, many of whom had also attended the weekend camp. Chairs and tables were moved to create two dance areas, and so the dancing continued. There were couples waltzes and bourrées, along with rhythmic circle dances. So much fun!

During this concert, Emilyn Stam, equally at home on both piano and violin, showed off her stellar talents in composition, improvisation and interpretation. We rather think that in meeting Filippo Gambetta she has found her musical match, since he shares similar virtuoso abilities. Coming from a city in Italy with many hugely talented folk musicians, Filippo is surely among the best.

It was an unforgettable scene. Two superbly talented musicians engaged in playing their music, bodies and souls wholly engaged in the creation, completely tuned in and feeding off each other. It was a concert where one plus one equals infinity.

The CD Shorelines is available from Borealis Records:   https://borealisrecords.com/product/shorelines/

Venus Talks: an interview with Isabel ...