Annie Sumi is a force of nature 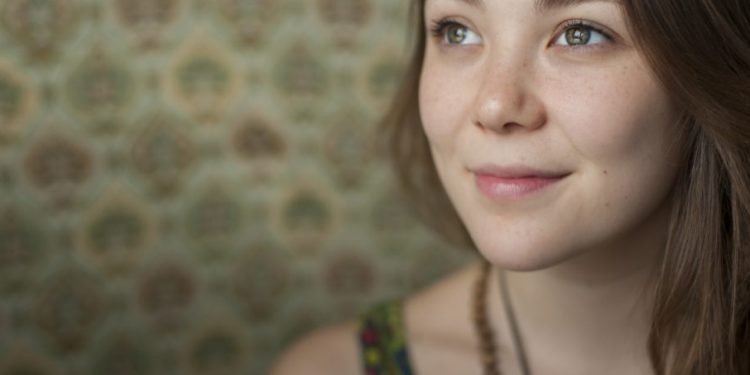 “Of course you’re based in Guelph!” I blurt out to Annie Sumi, and we both laugh.

How could she not be?

She’s got that radiant, spiritual, neo-hippie vibe to her that reminds me of Guelph singer-songwriter Tannis Slimmon, who herself has always struck me as the very personification of Guelph’s arty, hippie culture.

Little did I know that Tannis had mentored Annie in the Folk Music Ontario Youth Mentorship Program back in 2015, the year Annie released her debut album, Reflections.

“She’s like my sister and my best friend and my music mama.  She’s just such a great great person,” Annie said of Tannis, as we talked inside a tipi on the grounds of the Trout Forest Music Festival a month ago.

“She lives with a very similar sense of love and desire for connection in people.”

Now the two women are out on the road together for what they’re calling the Sweet Corn and Sunflower Tour – a perfect name for a Tannis and Annie tour if ever there was one.

Coming up with a perfect description for Annie’s music is harder, if only because it’s hard to describe solo female vocalists in general without trucking out a box of clichés:  “wistful,” “ethereal,” and “melancholy” all come to mind.

And then there are the standard points of comparison:  Joni Mitchell, Sarah McLachlan and all.

Annie fits all those descriptions, and yet she sounds like nobody else that they apply to.

Yes, her voice is wistful and ethereal, but it’s also powerful and slightly fractured.

Yes, she has Joni’s jazzy mellifluousness and Sarah’s melancholy, but there’s something else there too:  an earthiness and an edge you might loosely describe as “indie.”

Her work is spiritual but not airy fairy, as exemplified by the song “In Everything” off her new album, In the Unknown.

“There’s a little bit of God in everything,” she sings in a song filled with references to nature, a song that builds from a simple, acoustic voice-and-guitar verse to a furious storm of vocalizations.

“I really genuinely feel like when I’m writing, when the songs come to me, they’re not really coming from me.  They’re coming to me,” Annie said during our tipi chat.

Annie grew up in Whitby, Ont., and took a serious interest in music as a teenager, despite having non-musical parents, she said.

She studied English and History at Nipissing University in North Bay, Ont., and released her first album immediately after graduation.

She credits her spiritual nature to both her family and her time in the north.

“My family is amazing. They’re just the most loving and caring people, and they’ve taught me so much about what it means to be a good person,” she said.  “So in part, I feel that my spiritual heart was formed by that love.  But also, when I went up to North Bay and spent that time out in the woods, that’s a type of teaching in itself when you start connecting your heart to the land.”

Annie spent several months after the release of her first album, touring the country on and off.

She followed it up with In the Unknown in the fall of last year – an album whose lush, earthy arrangements are augmented with field recordings from nature.

She’ll be performing songs from that album during her shows with Tannis this month.