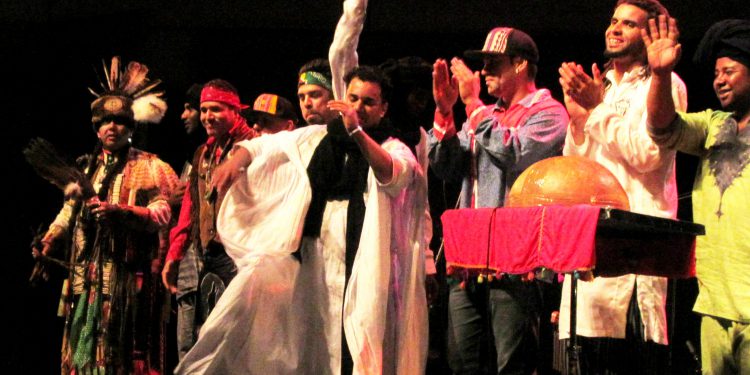 Gracious weather returned for Saturday’s slate, initiated with three symposia, held indoors at the Brigantine Room, featuring a set of media movers and shakers, a rebel brigade of cross-cultural adventurers and Brenna MacCrimmon’s moving testament to the power of instinctual affective guidance in musical life commitments.

Denise Donlon, Canadian media’s queen-pin, set out the first topic of the day: given the eventual success of Harbourfront’s exclusive North American hosting of WOMAD between 1988 and 1991, (the initial show in the U.K. had to be bailed out of bankruptcy with a benefit concert by the members of Genesis), what was it about Toronto that made it a perfect petri dish for the cultivation of a multicultural music community?  The panelists, the omnifunctional Derek Andrews, musicologist  Rob Bowman, broadcast guru Anne MacKeigan and dub poet/professor Lillian Allen, were clear on several factors: Pierre Trudeau’s liberal immigration policy had given Toronto a complex international makeover, there were new media platforms such as Much Music’s Clip Trip, immigrant voices were heard on community radio stations CKLN FM and CIUT FM, and the pioneering programming of Estelle Klein at the Mariposa Folk Festival and presentations by The Garys and The Bamboo Club had combined to eliminate the fear of buying that WOMAD might otherwise have encountered in finding a space in T.O.’s rock and hip hop marketplace. Remarking on the collapse of traditional technology’s marketing effects, Donlon pointed out that, as we move forward, the media is in the hands of the people now and broadening cultural intelligences and correspondence must become a priority for the whole international music community. Exit the strategic design consultants (and 80% of the audience) and enter the street level engineers. Polycultural enablers Polyphonic Ground had presented moderator Bandana Singh with a bold agenda of questions: How do artists connect with audiences who can’t identify them? Is every artist their own genre? Is world music a genre? (Banned) And what is the future of an industry designed around genres? The panelists were all thoughtful and well-qualified to explore these issues, as well as raising a few of their own “painful” problems: cultural appropriation, the romanticism and the exotification of traditions, and dealing with the necessary non-musical luggage of any “genre” amongst them.

Punk Pakistani/Canadian singer Urvah Khan brought an immediate political perspective to the proceedings, citing the repression of women’s voices, unfortunately not just in Pakistan, as a barrier in creating any sort of profile in specific categories of music. Her resolute mission of “challenging mentalities” has brought her into conflict with the confusion of pop culture definitions. “Don’t try to make a pop song unless you have a million bucks,” she said, claiming artistic independence and singularity as a preferable goal. Singh, who loudly inhabits the T.O. punk scene herself, (“all the while looking like a school teacher,” commented Khan) and who has experienced so much personal misreading that she views genre-busting as a personal necessity for survival, agreed with Khan wholeheartedly.

Ruben ‘Beny’ Esguerra, an educator and recent Juno nominee, has a very specific traditional song heritage as his root centre that dates back to 16th century Colombia. Upon entering the Toronto musical ecosystem, he discovered that his best opportunity to adapt and express himself was in the city’s thriving Afro-Cuban scene. By taking on its allegiances to hip hop and RnB influences, he found his creativity being enhanced and mutated by adaptation to these different currents. “I would say that my non-specificity opened more doors than it closed,” he affirmed. “I haven’t met anyone yet who can explain what my niche is. As a result, I end up in all kinds of different categories and events.”

Small World Festival site manager and active maracatu percussionist Alex Bordokus grew up with “Andalusian and borderline Arabesque styles of music” in his Greco-Turkish household. His dedication to a well-defined Brazilian sub-genre has taught him that the spirit of a genre involves “not just the music, but the dance, and the party too.” He wrestles constantly with his responsibility to represent correctly in a tradition that he wasn’t born into.

Promoter and talent presenter Alicia Bee, who grew up with a dad that was a house DJ, was clear-headed throughout the conversation. From her perspective in selling musicians to their audiences, she foresees a future where promotion relies on “the marketability of person instead of the marketability of genre.”

Brenna MacCrimmon’s workshop was a delicious, but too brief, case study as testimony to many of the topics that had been given voice by the panel.

“I was told not to do it,” she said of her decision twenty years ago to go to Turkey to record her original Turkish songs. “The singer must be from the culture to succeed. You can’t record with Roma musicians. You will not be able to sell your music. And yet to this day, I am approached by people who found so much meaning and positive encouragement in what I did.”

Throughout the discussions, vibrations had been emanating through the curtains from guitar trance mongers Gelax and Waleed Kush and his African Jazz Ensemble, who had set off the day’s festivities from the courtyard gazebo stage, with its well-used flexible Astroturf dance floor, in a fairly hospitable summer’s haze.  Since many outdoor festivals have been feeling the burn on attendance figures because of our climate’s recent intensity this summer, this was good news for all. The Beyond Genre panelists.

Meanwhile, a cluster of frame and goblet drums was being assembled for one of the most exquisite concerts of the weekend, featuring the Persian instrumental duo of tar virtuoso Sahba Motallebi and impeccable percussionist Naghmeh Farahmand. Sahba’s mulberry-bodied  tar (“just a guitar without the ‘guit ,’” she explained) is a delicately responsive instrument with more of a banjo flavour, and she coaxed it into high gear with a brass plectrum as Naghmeh’s fingertips raced alongside her, reproducing the articulate phrases of ancient Persian melodies. The Studio Theater space was as hushed as a recording studio, so for an hour and a half, the two musicians were able to concentrate on refreshing the ticketed audience with gentle flurries and fierce blizzards of notes in richly decorated scales that held surprising, and often profound resolutions.

Out in the courtyard, the astroturf was getting an intense grinding as the dancing (that’s the D in WOMAD) continued with a workshop of instruction offered in the South Indian gestural style of Bharatanatyam movement, followed by the body-shaking motivations of Soukustek, presenting the rhythms of Colombia’s African connection. At the Lakeside stage, a large crowd was getting settled in to enjoy Italy’s vigorous Kalàscina, who showed no mercy in pacing or volume, working the audience into a sweat with marvelous energy and a disarmingly Celtic palette of dance and diddle-i dum. But even this display of energetic expertise was no preparation for La Dame Blanche. The expansive Cuban chanteuse, resplendent in ribboned boots, gauzy skirt, and a cartoonish headwrap, stepped up sharp as a machete, with a plastic cigar and a menu of reggaeton, cumbia, yodelling and advanced flute chops. Using a bawdy (but not vulgar) stage persona that displayed lots of badass sass and tongue, she gave off an animated Creole magnetism that left us entranced. AKA Yaite Ramos Rodriguez, she is the daughter of Cuban musical royalty: her father is Jesus “Aguaje” Ramos (maestro director of the Orquesta Buena Vista Social Club )

Her French drummer maintained a furious tempo, and an on-stage DJ who doubled on electric guitar enlarged the EDM quotient to supersonic levels, totally satisfying the appetite for delight of the frisky, urban, Saturday-night throng. It all was kept popping by her celebrity soundman Marc “Babylotion” Damblé at the board. The bacchanale continued into the night across town at an after party at the Luanda Room on Bloor West, where a unique opportunity to hear nowadays township gqom music from South Africa’s DJ Lag propelled the festival into early-morning overdrive.

Sunday’s program had the best turnout of the weekend, with exclusive screenings of two extraordinary films, Éthiopiques – Revolt of the Soul, and Chavela. The programming was solid, and people really started dancing in a unanimous, tribal way, particularly to TDot Batu. The live music aspect of the fest closed at an earlier daylight hour, concluding with the pounding polemics of the edgy Afro-Mexican band, Las Cafeteras. The crowd loved them, and they actually sold out of merch at the end, putting the closing flourish on what was a memorable and edifying weekend of rhythm and news, feeling the beat of the world in the heart of Toronto. The world, as they say, just got a little smaller. The Sutton Fiddle Festival – A photo ...