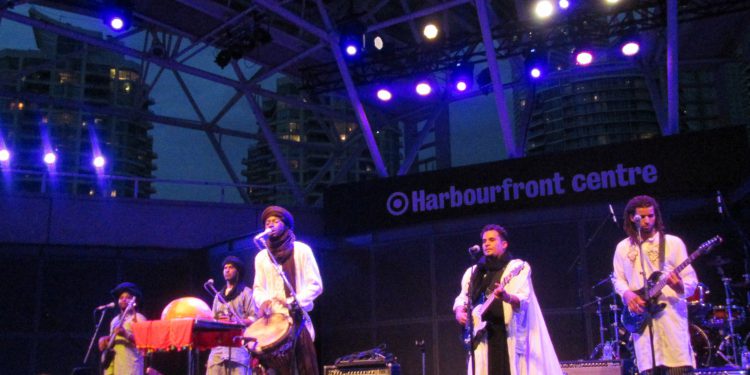 The 17th edition of the Small World Music Festival, an essentially free event expressing the variety and caliber of global music artists, was held this past weekend over three days at Toronto’s Harbourfront Center.

In the beginning, there was no such thing as world music. At a Saturday afternoon workshop, Brenna MacCrimmon, whose counter-hereditary bravery has led her to a life of playing Turkish music, described searching the “international music” section at Sam the Record Man back in the day for opportunities to travel the world using only her ears. I recall having to go to the same spot to search amongst the cardboard-carded niches for copies of Paul Horn’s Inside and early Bob Marley records, when reggae was just another generic “Caribbean” style.

Analysis of the broad definition of “world music” (developed by, amongst others, Peter Gabriel and his collaborators in creating the WOMAD festival) soon renders it meaningless, and discussions of it are typically banned from all workshop Q&A’s. However, “non-Anglo,” “non-commercial” and “unfamiliar” are some of the synonymous qualities that give the term its exotic, and subtly political tang of cultural colonialism.

Whatever its designation – global fusion, ethnocultural music, worldbeat – its largely urban audience was proliferating and diligently seeking out new hybrids, sources, and derivatives in the early 21st century, which is when Small World founder Alan Davis brought his global ear to this developing situation. Directly inspired by the example of WOMAD (which, at its 30-year anniversary, was the subject of an archival display at Small World this year), Davis initiated his first event to try to add a more “intersectional” platform to Toronto’s musical architecture. Early promotional obstacles were, he confesses “awkward.” But his audience eventually did discover the Small World ethos, and it has flourished as it has progressed, to the point of now hosting year-round events at a remarkable performance space on Shaw Street.

This year, in bold promotional strokes, the festival largely removed the ticket barrier, transitioned from an indoor autumn format to an outdoor summer one, and relocated from a matrix of clubs to a public waterfront park venue.

The opening performance on Friday met with a dismal welcome as a torrent of rain and flooding flashed down from the sky, forcing the show, featuring MacCrimmon and her ensemble, indoors to the nearby Brigantine Room. But by the time that Morocco’s Daraa Tribes were able to take the outdoor stage, things had been sufficiently squeegeed to allow an enthusiastic crowd of families, date-night duos and folks of every description to dance, wiggle, and gaze into their recording devices as electric Saharan grooves radiated up, out, and across the waters.

After much swirling of robes and stratocasting, the band welcomed the RedTail Spirit Singers and Sacred Wolf Singers, who had preceded them on the bill, back to the stage. Reciprocating the journey that the Kanesatake-based Mohawk band had made to Marrakech last October, Toronto hosted a tightly arranged an exciting intertribal collaboration, with the two groups switching off on a single pulse between the lightning of the desert and the thunder of the woodlands, with all inherent traditional specificities intact.

Not many could have held the stage after such a bombast, but Vieux Farka Toure’s trio was fully up to the job, rocking the night away with the same phased finger-style guitar attack with which he first conquered the fest ten years ago at The Mod Club.

Gracious weather would return for Saturday’s slate.  Stay tuned for a recap.

The Sutton Fiddle Festival: a recap ...