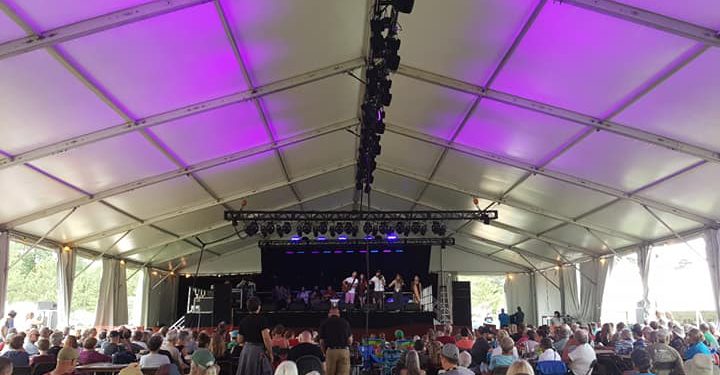 On opening night, I felt like I had a purpose, and that taking in as many concerts as possible was the best idea. But we overdid it. Today, Owen Sound was muggy, and the weather matched our mood. We hadn’t really paced ourselves on Friday, so today was a day of perambulation for myself and my son at Summerfolk 43.

The first workshop we went to was The Axe Came Back at the Wine Bar tent. Fred Penner and Andrina Turenne (The Harpoonist and the Axe Murderer) were sharing songs. After opening with “Sentimental Journey,” Fred went on to play songs from his award-winning Indigenous series Tipi Tales. Andrina started with the Taj Mahal-via-Baby Gramps version of the tune “Little Red Rooster” and then launched into a French song called “Au Revoir.” Andrina hails from St. Boniface, a historical area of contention between the Anglophones and Francophones in Winnipeg, and her repertoire is influenced by the songs from her home. Fred responded with a tune he wrote in French simply called “Bienvenue.” Andrina joined in the singing on that one, and Fred played harmonica on her songs. It was a charming spontaneous collaboration of a couple of Juno award-winning artists.

Next, we wandered to the Down by the River tent where The Kubasonics were leading a workshop in Ukrainian dance. Participation rates were high; most people were dancing, and there were very few spectators. Since it was still muggy, my son visited the splash pad (which ended in a visit to the well-prepared and personable volunteers at the First Aid tent- big shout out!) and then headed to the children’s tent. There is a children’s parade on Sunday, and kids are encouraged to visit the children’s tent throughout the weekend to create a costume to wear in the parade.

A bit later, we settled in for a bit to take in some more music at the Down by the Bay stage. With the theme of The Longest Road, Sarah Harmer, Stephen Fearing, Nick Sherman, and Rose Cousins all shared heartfelt songs about journeys, both personal and literal.

Heading back to the main stage, we enjoyed Fred Penner’s kid-pleasing show. He began the set with the 1930s Cab Calloway tune “Happy Feet,” made a bunch of Monty Python jokes, and then played all his hits, including “Sandwiches” and the ubiquitous “The Cat Came Back.” The show was filled with nostalgia for older crowd members and a palpable excitement as parents share their love of Fred Penner’s songs with their children.

Taking a break until the main stage performances started, we visited the food vendors and continued ambling around the festival grounds. Eventually ending up at the main stage, we caught Tanika Charles and her insanely groovy band as they got the night going in style. Singing soul songs about her Parkdale neighbourhood in Toronto, Tanika’s performance was one of the more dance-inspiring performances on the Amphitheatre Stage last night.

Following Tanika Charles, Beppe Gambetta’s solo guitar performance was intimate and inspiring. Beppe literally wrote the Italian book on flatpicking, and his playing is nothing less than impressive. His song “Superhit” and his “Black Mountain Rag” stood out from the rest. Beppe hosts an annual Guitar Summit in Italy, and I think it has made my musical bucket list. I just need 20 more years of flatpicking practice first. It’s good to have goals, right?

The programming for the main stage was a bit of an emotional rollercoaster last night. Tanika Charles was so upbeat, and then Beppe’s performance was more introspective. The Harpoonist and the Axe Murderer got people dancing like crazy again after that. If you haven’t checked them out yet, you’ll be impressed by the simultaneous guitar and drum playing. Their energy is awe-inspiring and contagious, and they really give their all. Next up, Rose Cousins played solo guitar and piano songs interspersed with quirky audience interactions and stage banter. Rose has excellent delivery, and audiences respond well to her unique style.

Continuing the roller coaster, Vishtèn brought the energy meter back up, and the dancing area was packed again. The level of musicianship has been high this weekend, and Vishtèn’s performance last night did not disappoint.

Susan Aglukark was the final performance on the Ampitheatre Stage last night. She opened her set with an immense amount of gratitude.  Playing a chronological show that highlighted hits from throughout her 25-year career, Susan incorporates elements of traditional Inuit culture into popular song. The anthemic “O Siem” was incredible to experience live and was a crowd-pleaser.

Finally, it was time to dance to St. John’s, NL band The Kubasonics at the Down by the Bay tent. Playing a mix of surf-infused Ukrainian music with a sprinkle of Newfoundland fiddle tunes, they are a fun showband. Singer Brian Cherwick dazzles with his multi-instrumentalism, and the rest of the band more than keeps up. Singing in Ukrainian, they do a great job of explaining the plots of their songs and encouraging audience participation. It’s impossible to have a care in the world when The Kubasonics are pounding out their rhythmic tunes with over-the-top choreographed moves. After the show, I overheard guitarist Darren Browne being described as “Jerry Reed on pills.” Accurate.

When the roller coaster ride was over, I ended the night sitting by the lake, enjoying the natural beauty of Owen Sound.