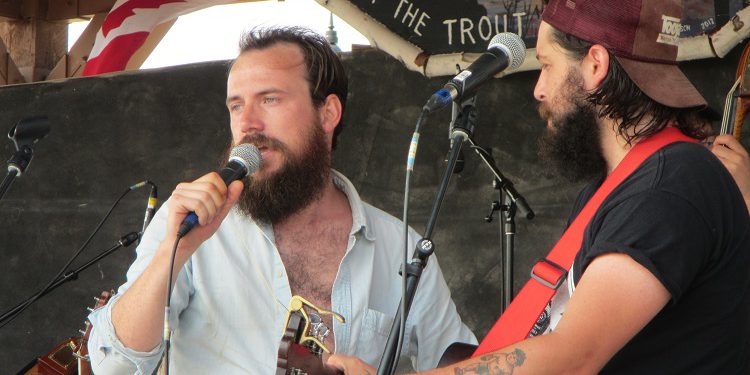 The Live from the Rock Folk Festival and the Trout Forest Music Festival both took place in northwestern Ontario the weekend of Aug. 10.  Live from the Rock is in Red Rock, an hour east of Thunder Bay.  Trout Forest is in Ear Falls, about five and a half hours northwest of Thunder Bay.  Veronica Kovacs and I couldn’t choose between the two, so we went to both!  Here are some photos from the trip.  Veronica took all the pictures.  I wrote the words.

Ken Yates won the 2017 Canadian Folk Music Awards for New/Emerging Artist of the Year and English Songwriter of the Year.   He was just starting his set at the Live from the Rock Folk Festival in Red Rock (near Thunder Bay) when we arrived in the evening of Aug. 10. Jenie Thai has a voice that can sing pretty well anything – blues, gospel, folk, pop, you name it! The Lonesome Ace Stringband features three of the hottest traditional musicians in Canada, including this guy:  Chris Coole, who’s played with the Foggy Hogtown Boys, David Francey and a whole bunch o’ other folks. The sky was a little darker than it should’ve been by the time Raine Hamilton got up on stage.  Sadly, she was the last artist we saw that night before the sky opened up and unleashed a downpour – coupled with a thunder and lightening storm.  Sadly, that meant we didn’t get to see the scheduled Friday night closers Fin de Fiesta Flamenco and Cold Lake Sun. We arrived at the Trout Forest Music Festival in Ear Falls on Aug. 11, just in time to see Campbell Woods.  “Where is Ear Falls?” you ask.  Hmmm.  Well, about halfway between Winnipeg and Thunder Bay, there’s a town called Dryden.  If you turn onto highway 105 a little east of Dryden and drive for 90 minutes or so, you’ll arrive in Ear Falls.  Don’t blink though, or you’ll miss it. Dave Quanbury played electronic covers of Leonard Cohen as part of a workshop called Tower of Song. We love that he had all his electronics set up on an ironing board. Dan Frechette was a last-minute addition to the line-up, sitting in for another artist that had had to cancel.  His (relatively) new partnership with Laurel Thomsen sounded great! The “We’re from the Region” workshop showcased early-career artists from Manitoba and northern Ontario.

Annie Sumi performed in Frank’s Tavern, which is really a covered workshop stage area directly in front of the beer garden.   Her show marked the end of my music watching day.  It was time to do some interviews to bring back home for the moose to write up.   Until next year!