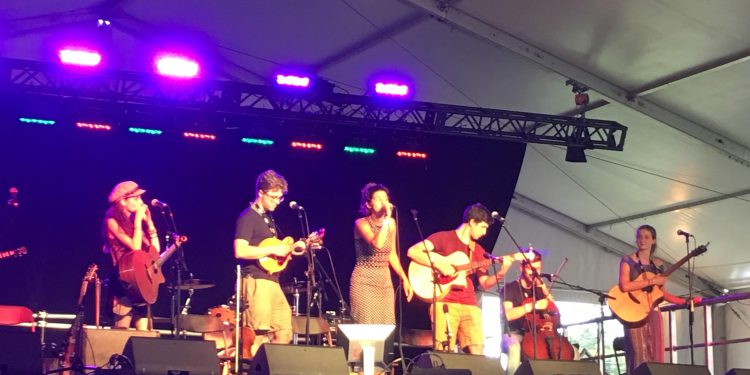 The Youth Discoveries workshop at Summerfolk 2018. Photo by Alison Corbett.

“Wake me up when Fred Penner is on,” my seven-year-old said to me.

Seated at the Down by the Bay stage at the 43rd annual Summerfolk music festival in Owen Sound,  Ont., the night opened with Youth Discoveries (Part I). Acts Fork ‘n Harp, Basset and Emily Gilbert took turns highlighting their talents and occasionally playing on each other’s songs, and Basset’s instrumentation certainly filled out the solo songs by Emily Gilbert. Fork ‘n Harp were entertaining, as singer Madison Galloway played the suitcase kick drum and instrumentalist Jonathan Markov pulled out some Jimmy Page-style guitar playing, bowing his archtop with a violin bow. This is only the first part of the ongoing youth showcase throughout the week, with a finale on the last day of the festival.

Ghost Story was the theme of the next portion of the evening. Guelph sweethearts The Lifers and Canadian songwriter Stephen Fearing worked together to create an otherworldly experience. Stephen started off by telling the tale behind his song, “Cold Dawn,” which is about a helicopter crash that happened off the coast of Newfoundland in 2009. As a Newfoundlander, it’s hard not to take this song personally.  It’s reminiscent of Ron Hynes’ song “Atlantic Blue” that immortalized the Ocean Ranger disaster.  Hearing the Cougar helicopter crash memorialized and interpreted through song gave me the chills.

The ghostly theme continued with The Lifers playing a song about a time when Sackville. N.B. residents thought the town was haunted, but the ‘ghosts’ turned out to be radio waves. The Lifers also threw in a light-hearted, upbeat song about dating a ghost, featuring lines like, “Would you still make dinner for two/ and eat them both because I can’t chew.” The Lifers and Stephen Fearing on stage together were definitely six and one trying to make seven and attempting to create a spectral ambiance. They succeeded, and the spooky feeling from their sets followed me like a phantom throughout the evening.

Loose Ends and Lost Causes was the part of the night my son was waiting for. Fred Penner, Rose Cousins and The Primary Colours (Doug Cox, Linda McRae, and Kim Richey) took the stage. During the brief soundcheck, my son remarked that he was surprised that Fred Penner needed a microphone because the fabric and message of his songs was already so strong. Fred surprised many in the audience by departing from his usual kid songs and inviting the audience to join in a cathartic moment to release pain and suffering together as he played a Hank Williams-esque song. “All I know is this emptiness, and I’m crying out for you,” aren’t lyrics you normally associate with Fred Penner, but he showed a different side last night. He also played “The Quilt Song,” which is about his mother seeing his grandmother on her death bed when she was only two years old. This song fit the theme of loose ends, and Rose Cousins really managed to tie that theme into her songs, as well. Rose also mused that maybe there are no loose ends “because love can come back around and put things together.” The Primary Colours did a well-arranged version of the song “Waterloo Sunset” by The Kinks, complete with Doug Cox’s tongue-in-cheek introduction of it as a “British folk tune.” The highlight of the set, however, was when Fred Penner said, “What would you do if you were lost?” and then started singing The Beatles’ song “With a Little Help from My Friends.” Many families danced in a grassy area to the side of the stage during this song.

After this performance, we headed over to the main amphitheatre where Welsh trad rockers Calan took the stage. Their arrangements of bagpipe, harp, fiddles, and accordion and traditional step dancing at breakneck speed and accuracy were a spectacle to behold. They also played some sombre songs, including a Welsh folk song “Yr Eneth Ga’dd ei Gwrthod (The Rejected Maiden).” According to Welsh folk singer Siân James, this haunting song is a 19th century ballad from the Cynwyd area near Bala, which tells the tale of a young girl who finds herself pregnant out of wedlock, becomes ostracized by her community, and drowns herself in a river. Her body is found, along with a note requesting that she be buried without a gravestone so her existence will be forgotten. This powerful song unintentionally echoed the theme of ghost stories, but the stage was quickly brought back to life with a trad tune. Calan is a talented group of folks, and I’m sure their upcoming workshop on Welsh clogging is one to watch out for!

Immediately after playing the main stage, Calan headed to the Down by the Bay stage to play a Traditionally Amazing set with Vishtèn. Naturally, we followed them and enjoyed every second of this show. Both of these bands have a wealth of repertoire and have such energetic arrangements of traditional tunes. By now, many people were dancing in front of the stage and enjoying the driving energy of these two trad groups.

On the main stage, Sarah Harmer closed the night. The Harpoonist and The Axe Murderer, followed by My Son the Hurricane, rounded off the night at the Down by the Bay stage. The Harpoonist and the Axe Murderer delivered an incredible set of aggressive blues and soul. Paying tribute to Aretha Franklin (there’s that ghost theme again…) the band managed to pay proper respects to one of the world’s greatest soul singers and then bring the house down by the end of the song. They are playing the main amphitheatre on Saturday night, and are not to be missed. The final act on the Down by the Bay stage was My Son the Hurricane. Their tour de force kept people dancing until the last moments of the evening. I could hear their horns echoing through the air and the sound of joyful revelers as we walked back to our tent.

The northwestern Ontario festivals: a photo ...