Summer’s for the folk: 5 + 1 places you’ll find me at Summerfolk this weekend 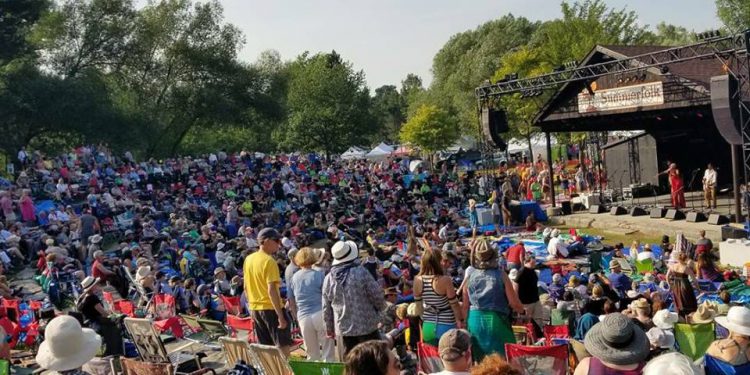 Summerfolk back in the beforetimes.

As a youngster growing up in Newfoundland, you could’ve bet me a million dollars that a rollicking Ukrainian band would one day come from our fine shores, and I would have laughed you right out of the room. Lo and behold, the Kubasonics have broken the mold! They’ve been tearing up folk festival stages across the nation so far this year, and I am looking forward to seeing what they have to offer this weekend!

Since 2014, I have been living in the Arctic where Juno award-winning artist Susan Aglukark is a household name. There are many up-and-coming bands from Nunavut to keep an eye on, especially since Iqaluit’s The Jerry Cans launched their Aakuluk record label, but Susan Aglukark was a pioneer in her time. I have never seen her perform live and can’t wait to see such a legend onstage blending Inuktitut and English.

The Magdalen Islands hold their own geographical allure. Quebecois islands that are close to PEI and Nova Scotia, they are known for their dedication to Acadian culture. With members from PEI and the Magdalen islands, Vishtèn is a trio of multi-instrumentalists whose music pays homage to the strong musical connections between their two island Acadian communities.

Hailing from “nowhere and everywhere” can be equally as important as identifying with one specific place and culture. Mama’s Broke draws from a smorgasbord of musical influences, including old time, blues, Quebecois, punk, Celtic, Balkan, and doom metal. This duo weaves together sounds from all over the world and often incorporates traditional dance into their performances.

Co-founder of the multiple Juno award-winning Blackie and the Rodeo Kings, Stephen Fearing has had a hand in shaping the Canadian musical landscape. Fearing has called many cities home during his career and his songs have found an international audience. He has released ten albums as a solo artist, with his most recent endeavour being 2017’s Every Soul’s a Sailor. With such an extensive catalogue of songs, his performance at Summerfolk will undoubtedly be a treat.

Full disclosure: I’ve been jealous of my friends who have been posting selfies with superstar Fred Penner this year as he has traversed the nation performing shows.  My goal for this weekend is to get a selfie of my own with my childhood hero who taught me that it’s okay to keep your guitar in a hollow log (pro tip: it isn’t.)

The northwestern Ontario festivals: a photo ...