The Lunenburg Folk Harbour Festival recapped by the guy that books Stanfest! 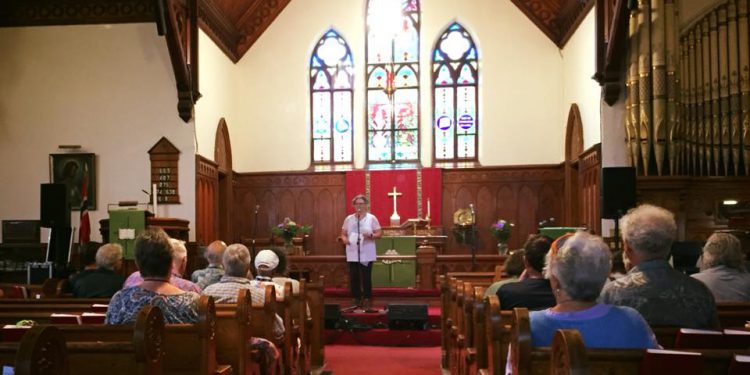 Troy Greencorn is the artistic director of the Stan Rogers Folk Festival in Canso, N.S.  He offered to recap the Lunenburg festival for us here at Roots Music Canada.  Thanks, Troy!

The best folk festivals happen in storied communities with deep heritage, captivating scenery and art-loving humans “who get it.” Lunenburg scores high on all these measures, presenting a world-class festival in a town that is a UNESCO World Heritage Site. For 33 years the Lunenburg Folk Harbour Festival has been a stalwart of folk and traditional music in Atlantic Canada. The festival has achieved great community engagement over the years with six venues, many volunteers and amazing community/cultural outreach activities, including a year-round concert series, prizes at regional music awards, student scholarships, the Alma Houston Talks (“The Art of the Song” and “Women in Song” in 2018) and a “School of Folk” with workshops in vocals, fiddling and dance.

I must confess that the music, living history, spectacularly-preserved architecture, multiple museums, great shops, unique and diverse dining choices, dozens of galleries, and interesting book stores and the beautiful “working” waterfront won me over on my first visit 24 years ago. Truth be told, it changed the course of my life and career. It was in Lunenburg I first experienced the magic mix of artistic and human experiences that a folk festival renders, and saw the community-changing economic impact of festivals on their host regions.

What differentiates a festival from listening to music on a recording or the radio? It is the stories. We meet the storytellers, learn about the context and inspiration for the songs. Lunenburg is a festival where audiences, sometimes of 50 at the public bandstand or 700 at the mainstage tent, listen to every word spoken and sung. It is so refreshing and deeply appreciated by the artists on stage. Silence in this case isn’t complacency; it is rooted in respect. The audiences are quick to respond when called upon and frequently reward worthy performances with hearty ovations.

Lunenburg gathers together local, regional and touring artists from across North America, Ireland, Scotland, England and beyond. Rather than share a chronological recap, I’ve chosen to hit the weekend highlights as I experienced them.

If one was pressed to identify the weekend’s headliners it would almost certainly be the Red Horse Trio, comprised of Eliza Gilkyson, John Gorka and Lucy Kaplansky. Each did their own main stage, bringing their counterparts onstage to join for several songs. Throughout the weekend they performed as a trio and in other combinations. Their pedigree and song catalogues, developed through a lifetime of touring and recording, stood out amongst the diverse line-up.

Lunenburg’s daytime venues are all attractions in themselves, offering beautiful backdrops for the performances they host. Three beautiful historic churches host concerts daily: Saint John’s Anglican Church (1753), Central United Church (1883) and Zion Lutheran Church. The wharf stage has long been one of the favourites of Folk Harbour, gathering audiences for performances on the busy waterfront. I can’t think of another festival in Canada where you can see schooners, yachts and fishing boats sail by as you enjoy the concerts. I found myself gravitating there to enjoy the sunshine and the scene, allowing myself to be surprised by the programming. Shows also take place in the historic bandstand at the town’s centre.

I always enjoy seeing emerging artists that are getting their stage-legs. When it comes to performances there is only one way to get good at it, and that is onstage. Lunenburg showcases early stage artists from their region and should be commended for that. The festival also plays an important role in elevating the careers of the next generation of Atlantic Canadian newcomers. The Lumberjills from New Brunswick and Earl and Coffin from Newfoundland stood out as the new artists to watch. Both gained many new fans.

Several francophone acts were showcased at the festival, and the language diversity was welcome. Quebecois group Les Chauffeur à Pieds, with its double meaning of both “Feet Warmers” and “Drivers on Foot” brought great energy and humour to each stage they visited. From the Gaspe region of Quebec, the duo Dans L’Shed was a pleasant surprise with a smooth and skillful, instrumentally-rich mix of folk, country and blues. Their latest recording is called Gaspericana, a good indication of their musical leanings and sense of humour.

The blues were alive and well in Lunenburg. When I arrived on Friday, folks were still talking about Texas-based Ruthie Foster’s Thursday night and Friday shows. Just out of high school, NLs Earle and Coffin started Friday evening with youthful energy and a blues and instrumental acumen that belies their age. These are some old souls, whose musical adventures have already taken them to the ECMAs, multiple major festivals and the International Blues Challenge in Memphis. Detroit’s Robert and Bernice Jones, preachers, teachers, activists and artists made a big impact both on the mainstage and their daytime shows, sharing their spirit-infused blues/gospel/folk repertoire. Alberta’s Kat Danser was in town to participate in the “Folk Steps” program as well as performing and emceeing throughout the weekend.

While it has become fashionable for festivals to do gospel concerts, Lunenburg’s Sunday morning event was the best-attended show of the weekend. The mainstage tent was filled to capacity with perhaps another hundred seats placed outside it. Over two hours, virtually all of the festival’s main artists contributed a song, backed by a backing band, also selected from the festival cast. I lost count of the standing ovations after eight. Lunenburg was fortunate to have one of the sunniest weekends of the Nova Scotia summer with brilliant, cloudless skies. Sunday morning’s weather for this popular event was perfect.

After having presented Fred Eaglesmith several times, and seeing him in concert many times, I’m admittedly a “Fred-Head.” It had been a few years, so I wasn’t totally prepared for the show I experienced Sunday afternoon in the Central United Church venue. In the sweltering heat, and challenging audio environment, Fred chose a fire-and-brimstone tone for his delivery, starting off with some loud rock songs (as he put it) and actually chastising the audience if they chose to leave, or if they arrived late. This hardly ever goes well for a performer, but Fred more or less pulled it off, sharing his views on how the peaceful rock and roll revolution was what is needed once again to right the situation to our south. He challenged us to check-in, pay attention, turn off our cell phones, be vocal, be active and speak out. True fans love his outspoken views and fearless delivery. While some patrons elected to leave, those of us who stayed were treated to a memorable performance. Perhaps the funniest statement of the show was when Fred said, “Ok now that they are gone. I’m gonna sing some folks songs.”

What were my new discoveries for the weekend? They were mostly re-discoveries and updates. While I’ve seen the Small Glories in various showcase events this was my first opportunity to see them in a festival setting, and they were wonderful. So unique, their material is well crafted and their energy infectious. It had been years since I’d seen the Outside Track, so it was great to see how well they have evolved. Their musicianship and professionalism onstage has been honed by constant touring worldwide. It was a first time seeing Lucy Kaplansky, and I’m keen so see and hear more. Off to Spotify and Youtube I go.

The East Coast scene is as vibrant as ever and Lunenburg represented this well on all of its stages. I enjoyed the multiple opportunities to see NL-based song collector and ballad singer Matthew Bryne. With the care of a historian he painted vivid pictures before delivering each song. When given his 10 minute notice by the stage crew, he moved the audience to laughter with his comment, “I’m a ballad singer. With 10 minutes I can’t even get the ship out of the harbour.” Touring veterans and Lunenburg returnees Madison Violet, the Ennis Sisters, Old Man Luedecke, Kim Harris and Ian Sherwood were all crowd highlights. Like Matthew, and many other artists at the festival, their shows were rich in storytelling. I had multiple, “Oh that’s what that song is about…” moments over the weekend.

While I love the main stage performances, the real heart of a festival happens on the daytime “workshop stages” for me. The songs and stories carried us audience members through a range of emotions as great workshops should, one moment on the verge of tears, the next moment splitting our sides laughing. The spontaneous collaborations that evolved song by song, in real time, reminded me why this style of presenting is so vital to festivals. While I visited all of the stages over the three days, I was repeatedly drawn to the wharf stage, partly by the programming, but also drawn by the gorgeous waterfront and the opportunity to sit at a stage on a working wharf with boats sailing by and a fresh ocean breeze tempering the bright sunlight and heat of one of the summer’s nicest weekends. Lunenburg 2018 had a virtually perfect forecast, save for a heavy shower on Thursday night.

What a great festival. We enjoyed the weekend immensely. If you haven’t experienced this festival and community, you really should.