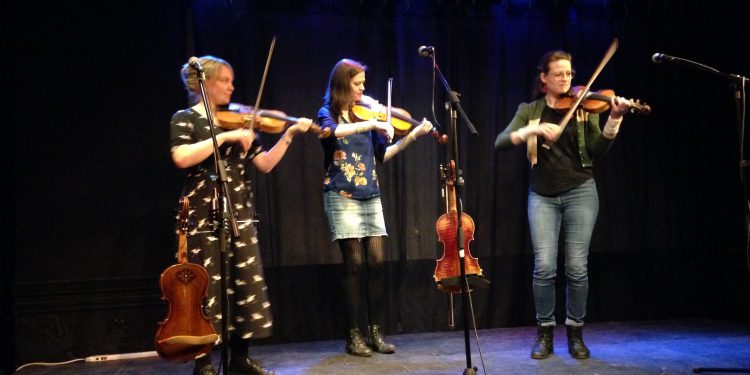 It’s not often in Canada that we get to experience the music of another northern culture from half way around the globe, let alone three other northern cultures in one band. But gosh, it sure is fun when that happens. There’s got to be something besides snow that our northern nations have in common.

Fru Skagerrak is comprised of three talented and beautiful Scandinavian women from three different countries who play violin, among other things, and sing with voices like angels.

Anna Lindblad, from Sweden, has played violin since the age of nine. Maja Kjaer Jacobsen comes from a folkie family in Denmark and has been singing since early childhood. She played guitar from the age of ten, and then began violin at age 14. Elise Wessel Hildrum, from Norway, started with recorder at age six, learned baroque and classical music, and then finally, at age 21, she connected with folk music and dance. She attended a folk music college where she studied Norwegian violin, Hardanger fiddle and viola.

In Fru Skagerrak, the ladies play three fiddles, one viola, one five-string violin, and differently-voiced recorders. It’s an amazing sound that makes your heart sing. Their debut CD, Ankerdram, brings together music from all over Scandinavia. We were delighted to see their concert in Hamilton, Ont., this past April at the Artword Artbar.

Skagerrak is the name of the body of water – a strait – that is at the intersection of Norway, Sweden and Denmark. Zoom in on the Google map of the region, and you will see Skagerrak marked on the briny blue that is the watery connection between the Baltic Sea and the North Sea. It’s a tremendously important stretch of water, not only for its incredible biological diversity, but for its strategic importance.  Without the Skagerrak, all the nations in northeastern Europe, from Poland to Estonia, Russia and Finland, would have no access to any of the world’s oceans.

In Scandinavian languages, Fru means “lady” or “woman.” The ladies of Fru Skagerrak create a link of vitality among three of the four Scandinavian cultures. Those linkages are many – language not the least. Each of the three ladies in this band speaks their own language, and it is understood by the others, the tongues are that similar. Some pronunciation is different, and some words have changed. The written languages are markedly different, however, spoken words are quite similar. There are similar linkages in the melodies they share.

The music is delightful. There are tunes and songs from Norway, Denmark and Sweden in equal measure, with many three-part harmonies on voices and fiddles.  The title: “Ankerdram” means the anchor dram. Sailors have used the term since the dawn of sailing vessels to describe quaffing a little dram of liquor after safely dropping anchor at the end of a challenging voyage.

The band Fru Skagerrak often feels the same after a tour. It’s a similar kind of tumultuous journey that one needs to celebrate with good friends, sharing drinks after the voyage is over when you can breathe that great sigh of relief when it all went well.

After orbiting each other’s periphery for years, the three Fru met frequently from 2011 on during jam sessions at music festivals in Norway, Ireland and Sweden. Irish artistic director Declan McCarthy saw one of their jams and was so impressed, he invited them to play together at the Baltimore Fiddle Fair in Cork, Ireland.

Said Maja: “Our music has lots to do with our perspective of home; it anchors you back to where you came from.”

They’ve been teaching each other tunes, and figuring out how to blend the styles from their different regions. They’ve recently joined with a Canadian agent and look forward to many festival gigs during 2019 and beyond.

The CD Ankerdram (2018) is the second recording for this band. Their first self-titled CD was released in 2015.

On Ankerdram, the melody “Lille Schnapps” is truly beautiful. It’s a lullaby common to Scandinavian cultures that is sung here in all three languages. Each Fru sings it in her own native tongue, and together, the effect is mesmerizing.

The ladies have spent a good deal of time in Canada in recent years, Maja and Anna having both spent time in Québec, where they picked up tunes from the Québecois repertoire. You can hear that influence in the tune “Sørens Far,” where the break features the bones of a tune that is played in sessions there.

If you think there’s something slightly funny about the tune titled “Roll your R’s,” you’d be right. It’s an invitation to dance and do whatever you need to do with your backside when the music is right. It’s a tune written by Anna, in the key of F#Major.

Maja explained: “Playing this tune is like walking down a gravel road with one shoe off!” Fiddlers know all about tunes where you cannot play the open strings; they are pretty challenging but sound awesome.

There is another tune with international flavor: the melody “Kräfta”(Crayfish), written by their Cajun fiddling friend David Greely from Louisiana. Three-part harmony fiddling sounds very cool over a plate of tiny lobsters. You are transported by the tune – but you don’t know whether to fjords or bayous!

The ladies of Fru Skagerrak are very happy to be making music together, representing Scandinavia all over the world. What they are creating gives new meaning to the term “world music.”