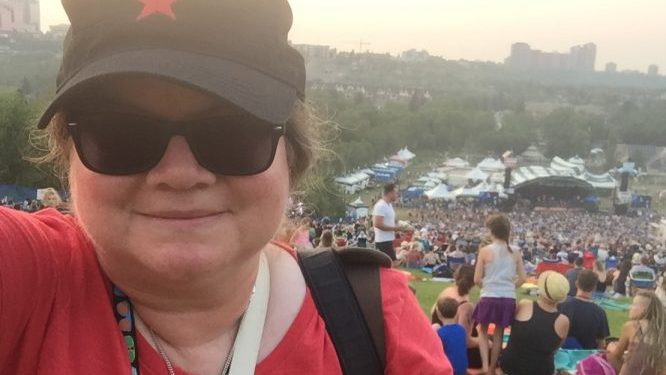 Our reporter for the Edmonton Folk Music Festival here at Roots Music Canada had some transportation problems that prevented her from getting to the site.  Fortunately, our friends over at Gig City, the fabulous Edmonton music and live events web site, DID make it there.  Here are snippets of their two reviews with links to the full articles on their site.   Thanks, guys!

REVIEW: Heat on the hill at folk fest Thursday evening at the Edmonton Folk Music Festival was likely one of the hottest folk fests on record. There was a heat warning as temperatures hit 34 degrees, and an air quality advisory due to drifting smoke from B.C. wildfires.

There may have been discussions about climate change among the sweaty (but happy) crowd – but likely not landing on the denial side of the debate.   (Read the full story on GigCity.ca.  Click here.)

I SURVIVED THE FOLK FEST (almost) Whoever came up with the saying “If you don’t like the weather in Alberta, just wait 10 minutes!” must have been at the Edmonton Folk Music Festival.

Diehard festival fans all have stories about the erratic weather over the years, some which resemble battlefields. They make sure they have all the necessary gear and protective wear, place their tarps on the hill, and stick to their posts, come hell or high water. This year, it was both.  (Read the full story on GigCity.ca. Click here.)