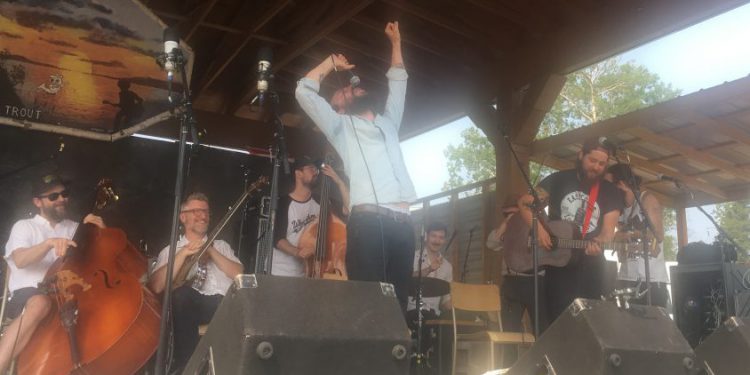 Photographer Veronica Kovacs and I woke up Sunday morning in our tent at the side of Highway 105, watching the odd car whiz by through the fly screen.  It wasn’t yet 8 a.m., so there was lots of time to freshen up before the music kicked back in at 10:30.

The park in which the Trout Forest Music Festival is situated has a comfort station equipped with toilets, a changing area, and even a couple of showers, which is more than you get at some festivals.  There were also a couple of large sinks, amusingly fed by a fire hydrant, with their grey water pipes funneled directly into the township’s sewer intake.

The fine people operating the festival fruit-stand had muffins, cinnamon buns and yogurt on-hand in the morning so that the campers could purchase a well-balanced breakfast.

Officially, the morning started with a 10 a.m. yoga class on the main stage, but having left both our mats and our inclination at home, Veronica and I began our festival day with the requisite folk festival Sunday morning god-theme workshop, in this case titled “Hallelujah, I have been saved.” It featured Annie Sumi, the Lonesome Ace Stringband, and Murder Murder.

“We don’t do any gospel songs, so we’re just going to do songs that have the word ‘Jesus’ in them,” Murder Murder vocalist Sam Cassio told the crowd.

“I woke up in the fiery tomb of my tent,” he began, “weighed down by the sins of alcohol, debauchery and impure thoughts.”

He then wandered down to the beach, he told us in his best southern gospel preacher voice, where the sight of his reflection in the water would’ve made him cry had he not be so dehydrated.

After jumping into the water to purge himself of his sins, the Lord, he said, delivered him a message – but only part of one.

“I guess he’ll come back later and tell me the rest,” he said.

With that the band broke into “When the Lord Calls your Name” from their album From the Stillhouse while Barry carried on the over-the-top tent revival act, wandering into the audience at times to point fingers at sinners.

Honestly, between that magnificent piece of theatre, which the audience lapped up, and Annie Sumi’s resplendent, spiritually-themed numbers – more on her later – it was the first time all weekend I’d seen the Lonesome Aces not be the most captivating thing on the stage.  And let’s face it, that’s saying something.

When “church” was over, Veronica and I headed over to the tavern to catch the last of Dave Quanbury to find out what he does when he’s not playing electronic covers of Leonard Cohen.  We managed to hear all of one song before he left the stage.  It sounded to me like on original done in the same electronic style.  Note to self:  check Dave Quanbury out online.  I’m intrigued.

Up next was Roger Roger, the twin brother and sister duo out of Winnipeg that Broose Tulloch introduced us to a month ago after their debut main stage performance at the Winnipeg Folk Fest.  Lucas and Madeleine Roger have a beguiling, easy-going, singing, songwriting, duel-guitar-playing harmony duo sound that was perfect accompaniment for a lunch-time beer.  (Excellent scheduling choice, producer Devin Latimer).

The Rogers have all the right stuff:   solid, original-sounding songs and lovely harmonies, but perhaps their single biggest selling point is their sheer adorableness on stage.  The twin brother-sister dynamic lead to all kinds of cute and random exchanges during their set on topics such as mortgage payments and home renovations.

“She had one free minute before I came into the world,” Lucas said of his sister at one point.

“You got an extra foot,” Madeleine replied to her much taller brother.

Next up was a workshop called We’re from the Region, a chance for some very early career artists from Manitoba and northern Ontario to showcase their stuff.  Namely the Grim Light, the Janzen Boys and Jackson Reed.  It was hosted by Winnipeg harmony ensemble Sweet Alibi, who are grizzled veterans in comparison with the others.   Far and away the revelation of this session was the Janzen Boys, a family trio from Winnipeg consisting of 17-year-old Simon on bass, 13-year-old Mick on mandolin, and their dad, John, on guitar.  Their songs were strong, and their harmonies were out of this world.  Couple all that with the sheer joy of watching a dad and his sons having so much fun on stage together and you’ve got an act that could be playing big festival stages in no time.

Each artist in the We’re From the Region workshop played two songs in the round before joining together on a cover of Neil Young’s “Helpless” (opening line:  “There’s a town in north Ontario”) as a finale.  The second number from Kenora’s The Grim Light reminded me of C.R. Avery’s work with its raw, plain-spoken portrayal of living in poverty.   I’ll be watching for more from this act.

Now about Annie Sumi.  She played her solo show at Frank’s Tavern Sunday afternoon after seeming to captivate the audience all weekend – as a Saturday night mainstage “tweener” and a Sunday morning workshop participant.  Her voice has a bit of the melancholy of Sarah McLachlan’s and the power of Sinead O’Connor’s.  And she embodies just a hint of Loreena McKennitt’s mysticism.  Above all, she has a bit of that proverbial X-factor – that impossible-to-define quality that some artists have that draws audiences in.   I wasn’t surprised to learn that she lives in Guelph and that Tannis Slimmon is her mentor.   She radiates loveliness just like Tannis does.

Annie’s set marked the end of my music-watching day, as I went to interview both Annie and the Janzens for future articles on this here web site, while the last workshop of the day – featuring all artists I’d seen already – unfolded on the main stage, followed by the finale.

Officially the festival wraps up around 5 p.m. on Sunday, but people are welcome to camp until Monday, and we were two of those that did.   It gave us a chance to soak in the water for a while, grab some dinner at the country club – which, vegan friends, has a veggie wrap on the menu – and even do a little blueberry picking, as blueberries are plentiful along the highway.  It was a perfect hippie weekend.  Heck, we even watched a cow moose bathe in a lake!

Not long after I arrived at the festival, I ran into Keri Latimer, festival producer Devin’s partner in music and life.  She mentioned that they don’t want the festival to get too big and crowded, and we joked that maybe I should write a terrible review to prevent too many people from wanting to come.

I cannot tell a lie, however. Trout Forest was fantastic.  A beautiful location, fantastic music, cleverly programmed, and a wonderful vibe.  The bugs weren’t even bad.

But that’s just between us, OK?

If anyone else asks, pretend it sucks.