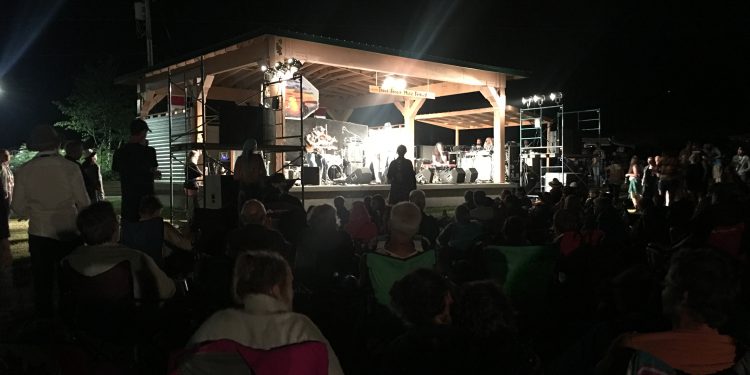 It’s a good thing Ear Falls, Ont., is a long way from anywhere.  If it wasn’t, the Trout Forest Music Festival would either be overrun with tourists, its magical vibe destroyed, or it would have to resort to a lottery-style ticket system like the one they use at the Blues Skies festival in Clarendon.

There’s a reason dozens, if not hundreds, of people drive to this town of 1,200 from Winnipeg (four and a half hours) and Thunder Bay (six hours) each year for a festival with no big ticket headliners.

Let’s start with the location.  The community stage in Ear Falls faces the shore of the English River, 50 or so metres from the beach and the pier.   And there’s no opaque fence to block your view of your surroundings or prevent you from, say watching the show from an inflatable mattress in the lake if you wanted to – although the sound board and the various shelters people set up on the perimeter of the site might get in the way.

The sides of the park space are lined with food and craft vendors, and the area immediately surrounding it is reserved for festival campers.  In other words, it’s a short walk from the main stage to your car or your tent.

Oh, and the drive up here is breathtaking.

Now let’s talk about what people really come for:  the music.

Truth be told, I’ve been wanting to come to this festival for years.  Each year, when I see the line-up, I can’t help but find myself in awe of the programming talents of producer Devin Latimer, himself an artist of some renown (He and his wife, Keri, are the duo Leaf Rapids, and they previously won a Juno with their group Nathan).

Devin clearly has a read on what’s popular in the grassroots folk-roots scene and an ear for what’s up-and-coming, cool and interesting.

Case in point, we arrived on Saturday just in time to see Campbell Woods, who last month won the Folk Music Ontario Songs from the Heart Award for folk music.  Campbell writes the kind of delicate, thoughtful songs that are best served in a more intimate setting than Frank’s Tavern, the covered festival side-stage with a beverage garden in the back, (one more thing to love about Trout!) but those who payed attention – and there appeared to many – were rewarded with a delightful set list and some terrific finger-picked guitar solos by Mike Kerr, which drew applause from the audience.  When Campbell sang what I believe is a new song about a baseball player reckoning with the realization that he’s gone as far as he can in the sport and it might be time to quit, I felt the hairs on the back of my neck stand up.

Next on my agenda was Papa Mambo, the veteran Winnipeg ensemble anchored by Rodrigo Muñoz.  I’m not a connoisseur of Latin jazz so I can’t tell you whether their set was a strong one or not.  I can tell you that Amber Epp sounded fantastic, her pure, dexterous voice moving from vampy passages to vocal sweeps with ease.  I can also tell you that the ensemble took a bit of a community band approach to its set, inviting guest musicians and composers, including Al Simmons, on stage to do numbers with them.

After a quick dinner break – note: vegans, you’ll be eating fruit and fries if you don’t bring your own food – it was on to a workshop featuring Geoff Berner, The Broken Songs Band, Oldseed, and Dave Quanbury.

Berner was his classic irreverent, folk-punk self, performing among other things numbers about Steve Fonyo and Vancouver’s obsession with condos.  The hoots and shrieks of approval at the end of his songs indicated that the crowd in this somewhat economically depressed region was more than able to appreciate lyrics about inflated real estate values.

Oldseed looks like the sort of guy you’d find eating in a truck stop or drinking Jack Daniels in a dive bar.  And he sounds like that guy might sound if he picked up a guitar and walked on stage: acoustic roots with a raw edge and a bit of hick attitude – but without the hick bigotry.  Craig Bjerring, who is based in Germany, made a point of telling the crowd how great it is to have so many refugees in the country, no matter what the media suggests.

Dave Quanbury spent his portion of the round performing electronic covers of Leonard Cohen songs, presumably a nod to the workshop’s title:  Tower of Song.  The crowd loved it, and so did we – especially his version of “First We Take Manhattan.”

The Broken Songs Band seemed to have a hard time distinguishing itself in this field of unique and impressive artists. The folk-jazz duo is comprised of classical composer Glenn Buhr and novelist and playwright Margaret Sweatman, who, to my ears, are neither particularly compelling folk songwriters nor particularly strong vocalists.  The stand-out aspect of their music is really Glenn’s guitar playing.

Over on the main stage it was time for daytime host Al Simmons to hand over his duties to the evening hosts Carolyn Mark and Kris Demeanor.

Al did a routine in which he pretended to give Kris and Carolyn tips on how to use a microphone properly – only to have his prop mic spray him in the face with a powder-like substance.   At this, Carolyn doubled over with laughter and commented that perhaps she shouldn’t have taken all those mushrooms earlier.  Just further proof that Al Simmons is the coolest children’s entertainer out there.

Crystal Shawanda burst onto the stage around 10:15 p.m. and immediately set it on fire with her scorching electric blues and vocal pyrotechnics.   Her transition from big-voiced country singer to high-octane blues vocalist is now complete with the release of her new album, Voodoo Woman, and she is clearly singing the music she’s most passionate about and having the time of her life on stage doing it.  A highlight of her show was her cover of Etta James’ “I Would Rather Go Blind,” a song Crystal has been performing for several years now, and an homage to the woman she says she always dreamed of sounding like.  If there is one criticism a person could make of Crystal’s set, it’s that it would be nice to see her show restraint now and again in order to vary the energy level of the set and let the audience connect with her and the music on a more intimate level.  Nonetheless, the crowd clearly loved what she did, judging by the number of people dancing at the sides of the stage throughout her set.  Audience-members called for an encore when she left the stage (something that wasn’t granted due to time constraints).

Ridley Bent closed the Saturday night show with a high-energy country set that filled the unofficial dance floor in front of the stage.  If it was a party Trout wanted to cap off Saturday night, Ridley brought it in spades.

As the clock struck midnight, Veronica and I headed to our tent with Ridley’s attitude-soaked tunes as the soundtrack for our stroll.   There would be more music to see Sunday, and we needed to rest up.

Correction: a previous version of this story misidentified the body of water next to which the festival is held.