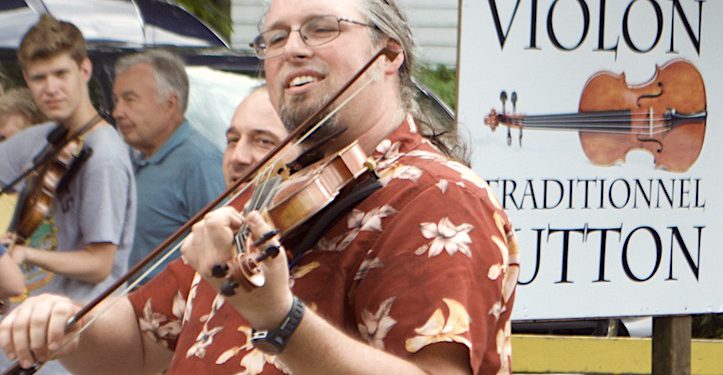 For five years now, there has been a friendly little festival happening in Sutton, Qué., during the third weekend in August. If you love traditional fiddle music, enjoy convivial company, and hanker for mountain scenery in a pretty little bilingual town, this is absolutely the festival for you.

For its first years, the festival was guided by the very able artistic director, Pascal Gemme, who grew up in the region and is possibly the most gifted fiddler, composer and producer in Quebec today. Pascal established the festival’s raison d’être in presenting a wide variety of traditional music, from Cajun to Scandinavian and everything in between. Since 2017, artistic direction has been in the able hands of Jean de Grosbois who has been instrumental and indispensible in the festival’s organization since its inception.

The festival is designed to share, learn, and illuminate. Many amateur and professional musicians alike come to learn and to play together. For the two days prior to the weekend festival, (Thursday and Friday), intensive master classes and workshops are available for all those who wish to learn. For 2018, those classes are being led by three very talented musicians:

Attendees of the intensive classes will be treated to evening concerts by the instructors, followed by jam sessions exploring common repertoire.

Friday and Saturday nights, there will be Québecois square dances in the nearby town hall, led by callers James Allen and Donald Dubuc. If you’ve never danced Québecois squares, you are in for a total treat. These are dances that will delight you with their interesting figures, and they are very easy to learn. If you can walk to the beat of the music, you will pick it up in no time. You will be guided in the patterns of the dance before it begins, so there is no worry about being inexperienced. Live music for the dances will be provided by bands that are also presenting concerts during the Saturday and Sunday festival events.

Speaking of the weekend festival events, the Sutton Fiddle Festival this year has some of the stalwart young fiddle players from the folk circuit in Quebec, as well as many really talented musicians from further afield.

Fantastic young fiddler Nicolas Babineau from Victoriaville, Qué., will join Alexis Chartrand, Sylvie Ladouceur and Peter Senn in a quartet with fiery Québecois tunes.  Pete’s Posse – Pete Sutherland, Oliver Scanlon and Tristan Henderson – hot off the North American contradance circuit, will join us from Vermont. Véronique Plasse and Andrea Beaton will show us their melding of Cape Breton and Québecois traditional tunes, and Fru Skagerrak, a trio of lovely women from Scandinavia, will show us how tunes from Norway, Denmark and Sweden blend beautifully together in an ocean of northern melody.

Multi-instumentalist Anit Ghosh will enchant us with his take on world music. We will hear classical/jazz trio Rhizome, and singer Monique Jutras will channel La Bolduc. Young Tradition Vermont will showcase their rich musical heritage, and fiddler Catherine Planet, originator of the Chasse-Balcon street performances that are so popular on YouTube, will surely share her passion for Cajun fiddle music as well as traditional Québecois tunes.

We will also be charmed by the band É.T.É, which features the extraordinary young fiddler and stepdancer Elisabeth Moquin. And, the festival would be quite incomplete without legendary fiddler/composer Claude Méthé and Dana Whittle – together called Zigue- from Ste. Beatrix, in the Lanaudière region northeast of Montréal. Those are just a few of the performers we will see at the festival this year.

Families are very welcome at the Sutton Fiddle Festival. There are performances especially geared to children, with storytelling, dance and music.  There will also be a wandering band playing at the outdoor farmer’s market, the brewery and a café. In short, there is a little something for everyone – four days of immersion in music and culture in this charming small mountain town in southern Québec near the border with Vermont.

Accommodations are easy. Many inns, hotels and B&B establishments are in the area, and the festival arranges for very inexpensive basic camping right in the middle of the town for those who prefer. Local artisans will showcase their beautiful hand-crafted items in the festival marketplace, and you’ll be tempted by the delicious local food and craft beverages of a sociable nature. If you can stay an extra day or two, do bring your bike. There are numerous great cycling routes within a short radius of Sutton, and there is great shopping in the delightful boutiques and galleries along the main street.

Sutton is a joyful place, and the Fiddle Festival is a lovely, friendly event. Go be in a little slice of musical and mountain heaven for a few days.