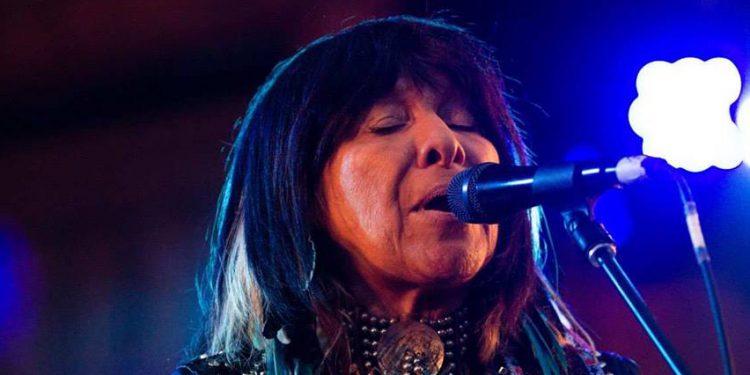 It starts with the 90-minute road-trip toward the Rockies – an annual trek I have made for 27 years.

The tradition for the past twelve of those years has been to do a live broadcast of The Celtic Show with Andy Donnelly on CKUA Friday night followed by a featured guest and a street dance.

It’s the official kick-off to the Canmore Folk Music Festival.

The town of Canmore hits a tourist crescendo on the August long weekend thanks to the festival, which is now into its 41st year.  It started with a small Heritage grant and a two-day event headlined by Connie Kaldor on a stage that looked suspiciously like a flatbed trailer. All who were there knew that it would build to be the world class event it is today.

Friday, I’m behind the on-air mic as we present the kickoff Canmore Street Party, broadcast to the province (and around the world) on CKUA.  The guests and audience gather around and celebrate the festival’s first night.

Andy Donnelly of the Celtic Show held court for two hours prior with a light-hearted audience-focused hug that reached well beyond the beautiful mountains. The guests tonight included Maggie & Cassie, The Mammals, and Bow Folk, plus a special conversation with festival director Sue Panning and the Calgary Folk Club’s Suze Casey (Calgary Folk Club is in its 47th Year).

The Friday night concert with The Mammals is a strong opener and a harbinger of what is to come. Performing on the small Civic Centre stage to a crowd of a thousand, Ruth Unger and husband Mike Merenda spark the gathering and lead the quintet into an hour of folk rock that is powerful and danceable.  They relate to the listeners with tales of miners and maple leafs, and Ruth even includes her version of her father, Jay’s, iconic tune “Ashokan Farewell.”

The entire town of Canmore has become part of this festival, which is dedicated to family and community. The gates open at 4:00 p.m. Saturday with Jon & Roy, Steve Poltz, Joey Landreth, Lindi Ortega, and The Mammals on the bill.

Saturday evening, I arrive just in time for the quirky Steve Poltz. I don’t want to give away too many punch lines, but the shout of thanks to the Canmore Folk Festival for bailing him out of jail just in time to make it to the stage is but one of the great ones. Poltz contrasts his songs with banter that endears him to the audience, as is proven by the long line-up for his CD signing for his new album, Folksinger.

Glorious is the only way to describe Shakura S’Aida. She is fabulous, with her shock of cropped white hair, her sultry, flowing, flaming red gown, and her Cleopatra gold necklace.  But enough about the formal wear, for there is nothing that can upstage her go-to-church blues. Her dialogue on civil rights leading into a version of The Doobie Brothers’ “Takin’ it to the Street” takes her from glorious to spectacular. The mountains of the Bow Valley bow to her performance.

The Sunday sets are too numerous and too overlapping to allow me to catch everything, and I miss the joining of Steve Polz and Scott Cook, whose songs compliment each other. Scott Cook even surprised Steve with a recorded message from Steve’s dad reciting a poem. These are the moments that elevate session stages to the status of one-of-a-kind performances.

I start today by sitting at the Stan Rogers stage watching Suzie Vinnick smokin’ up a blues storm with Carlos Del Junco and Tony D. The session, titled Blues Travellers, brings old friends together in a performance that’s dynamic, and again, reminds us that Suzie it a fine lead player.

The rest of the day is spent capturing Ruthie Foster with Shakura, Gunning and Cormier, and Lindy Lou.  There’s so much to see, and I’m obviously missing some fan favorites. I know that I only get to about 40 per cent of the shows.

The back stage is more than alive as well with a summit meeting between Ruthie Foster, Shakura, and Cecile Doo Kingue (all holding court with the Calgary Folk Festival’s Kerry Clarke). It does not go unnoticed that the immediate connection between the three begs for a collaboration that could be called Three Black Women and the Truth (A riff on Three Women and the Truth, the current project of Mary Gauthier, Eliza Gilkyson and Gretchen Peters). This is a rumor I am starting now.

The first highlight of the main stage is Gunning and Cormier. So many years on the road together has made them the best of friends, and their songs, instrumentation and jokester commentary set up all the performers to follow.

It’s Ruthie Foster that brings it all home.  Her big tent gospel songs have everyone standing and waving our arms.  Shakura even joins in on the stage with Cecile.  There’s a lot of joy in the crowd, and with that, I’m on my way to prepare for the next day’s events.

I kick off Monday at a workshop called Let’s Get Active with Buffy Sainte-Marie, Dave Gunning, Scott Cook and Jon Brooks, featuring songs of protest new and old. Jon shares his new album, No One Travels Alone, by performing the poignant “All Life’s’ Meaning.”

That leaves me with only a few minutes to watch the True Story? workshop, where Dave Gunning and JP Cormier entertain the crowd by falling off their chairs and Steve Poltz again weaves his magic.

Next I have to rush into hair and makeup for my mainstage emcee duties. I will introduce Buffy tonight, and while I have done this before, such an important honor is still top of mind.

I walk onto the stage at exactly 3:29, and, after a grand thank you to all of the volunteers, I introduce the world-traveling Scott Cook and the Second Chances. Their show is tight, succinct and totally aligned with the messages shared at the earlier Let’s Get Active workshop.

Quebec is in the spotlight next with Les Poules à Colin, the best of the best when it comes to trad groups bringing their roots to the forefront.

It’s onto more of a “world trad” sound with Tom Landa’s Son de Maple, the newest project from the man behind The Paperboys and Lorcarno. Tom’s songs are influenced by his birth country of Mexico, and his band is drawn from stellar musicians he’s connected with throughout his almost-thirty-year music career.  It combines fiddle, electric guitar, bass, and drums, with a special focus on Tom’s wife’s fiddle playing. It’s great to note that Tom and Kalissa’s seven-month-old son, Jacob, is in the adoring hands of Shakura.

Next up, for the second year in a row, is the wonderful and vocally connected Coco Love Alcorn. Performing now with a three-piece band (drums, bass, and keys) she is sharing new songs and leading the gathered throng in the greatest of “handmade songs.” Coco’s collaborations are famous.

Now it’s time for the big blues of the diatonic harmonica master Carlos Del Junco. He is so connected to his roots that there is no separating the man and the music. Brilliant set:  jazz, blues and a beautiful flow leading to Buffy Sainte Marie.

The anticipation of Buffy’s performance is palpable, given the times we live in.   She sweeps onto the stage driven by a cosmic wind. Each and every story a song, and each and every song a lesson sent down the wire. The set is full of energy, fun and social commentary. This is yet another experience to add to the personal list of best performances.

The set ends with “Starwalker” taking the evening to new heights not felt before. Buffy leaves the stage in the same cosmic way she entered. We then prepare for the finale with JP pulling out his best Stan Rogers voice on The Mary Ellen Carter, and Scott Cook and Dave Gunning leading the crowd of over five thousand on Four Strong Winds.  Another warm and fun-filled Canmore Folk Music Festival is in the bag.