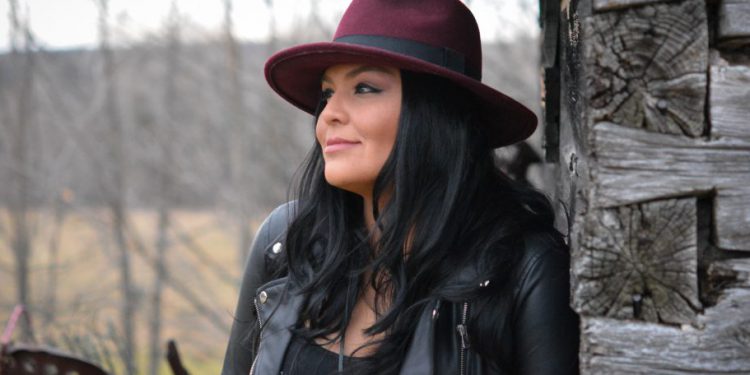 Sometimes, even the most instinctive singers need a little time to find their true voice. Just ask Crystal Shawanda. The celebrated Canadian-born, Nashville-based songwriter and musician has built a decade-long career on her hugely emotive performances, scoring a major label deal, chart hits, critical acclaim, marquee tours and a fervent fan following along the way. She was even the subject of a reality show, Crystal: Living the Dream, on the CMT television network. Yet it has taken Crystal until studio album number five — the gritty, soul-drenched, and positively electrifying Voodoo Woman — to pinpoint her essence as a blues singer, even though her previous albums would mostly be filed under country, and she has been performing since her teens.

“The whole time I was singing Patsy Cline on stage, I was singing Etta James at home,” Crystal said. “Singing the blues is like letting a bird out of a cage. This feels like what I am supposed to be doing. When I sing the blues, I can let loose and really be who I am as a vocalist and song stylist. That’s what Voodoo Woman is about,” she added. “I am so grateful to my country fans for the career they’ve given me. But everybody has new dreams every day, and if we don’t chase them, we’ll never figure out who we really are. I hope my country fans find the courage to chase their dreams, too.”

That candid statement provides a handy window into Crystal’s fearless artistic spirit, which led her to this musical change of direction. Well, kind of — she was inhaling Big Mama Thornton records as a kid on the Wikwemikong First Nation reserve where she grew up. And 2014’s The Whole World’s Got the Blues was a clear step in this direction.

Crystal released this video of her performing Etta James’ “I’d Rather Go Blind” back in 2012.  She covers the song again on her new album.

And Voodoo Woman — cut live-off-the-floor in Nashville alongside a boatload of talented guests— is a dazzling mix of “tributes to my heroes who led me to the blues” and previously released originals recut to meet the ever-evolving standards of co-producers Crystal and Dewayne.

“These are all first-take vocals. We didn’t redo anything,” explained Crystal, who can frequently be found moonlighting, guitar in hand, at Nashville’s famed Bourbon Street Blues and Boogie Bar. “My fans have often said they wished they could feel the energy of the live show on the records. That was a goal for us. Every time I went into the vocal booth, I treated it like a live performance.”

Not surprisingly, the new album kicks it right out of the gate. Scorching opener “Wang Dang Doodle” is a harp-goosed corker penned by blues legend Willie Dixon and originally cut by Howlin’ Wolf. The track provides Crystal’s soaring, sandpapery delivery with maximum momentum.

Elsewhere, as on the candlelit focus track “I’ll Always Love You,” written by Larry Grisham and Tommy Stillwell (a.k.a. The Beat Daddys and friends/mentors to Crystal and Dewayne), the singer dials down her power to unearth the song’s richly evocative and wholly universal emotion.

“I fell in love with that song, which also appears on The Whole World’s Got the Blues, but we completely rerecorded it here. We didn’t feel we had caught its heart. After our daughter Zhaawande was born, the song took on a different meaning. I started singing it differently; it was sweeter, more personal. And I recorded that song — and most of this album — with Zhaawande in my arms, so,” she laughs, “that’s probably my favourite song on the album.”

“You don’t have to add much flash to a song like that,” Crystal confirmed, though she pretty much can’t help but add flash to every song she tackles.

Notable originals on the new album include the saucy and slowly percolating “Cry Out for More,” a Shawanda/Strobel co-write. “It’s a song about the push and pull of relationships … working through those moments of ‘You drive me crazy … but I’m also crazy about you,’” Crystal howled. “And because we are husband and wife, we can really put that out there.

“Trouble,” another blistering original on Voodoo Woman — this one co-written with fast-rising composer and fellow Canuck Vanyah Venhuizen — showcases both Crystal’s peerless belting and her broader influences.

“That song has a bit of a throwback Tina Turner feel to it. It’s about being in love with bad boys,” she said. “It was done so fast, and I just love it.

“My whole life I feel like I’ve been given these stepping stones to the blues,” Crystal said. “My parents listened to country music and lots of Elvis Presley. I was the proverbial kid in the basement listening to my parents’ albums and combing the liner notes to find out who wrote the songs. That’s how I discovered Big Mama Thornton, through Elvis’ cover of ‘Hound Dog.’

“I followed up by listening to all of her music. Her voice was so big! I never heard a woman sing with that much presence, and I was intrigued. Recording ‘Hound Dog’ was like opening the floodgates for me. Plus, this album is really inspired by the resilience of women who were survivors of love, of the music business, of life. That was their voodoo. They were survivors, and so am I.”

Crystal continued: “Voodoo Woman is a whole new Crystal Shawanda. And when you think about it, blues is the root of everything. Country, pop, rock — they all derive from the blues. Even country led me to the blues. Hank Williams sang ‘Lovesick Blues’ and ‘Long Gone Lonesome Blues.’ Maybe this album is like a mini-education in blues! If that’s how people approach it, well, that’s fine with me.”