The Stan Rogers Folk Festival: is there magic in the Canso fog? 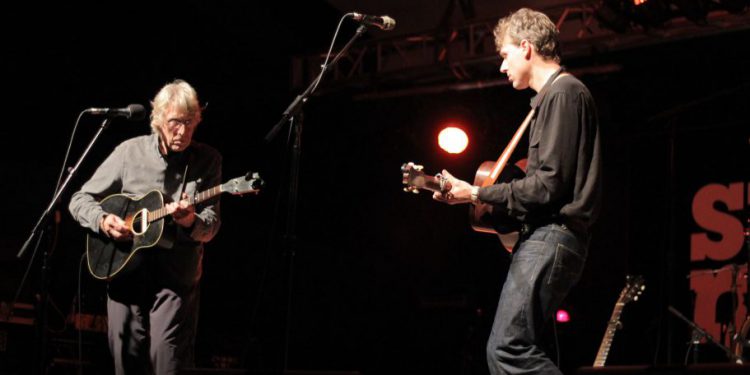 Bill and Joel Plaskett at StanFest. Photo by Brooklyn Connolly.

For anyone unfamiliar with the late great Stan Rogers (1949-1983), here’s what you need to know:  he is celebrated for immortalizing the experiences of ordinary Canadians in song – particularly those Canadians on Canada’s East Coast. Songs like “Northwest Passage,” “The Mary Ellen Carter” and “Barrett’s Privateers” are as much a part of the Canadian songbook as “The Wreck of the Edmund Fitzgerald.”

Although Stan was born in Hamilton, Ont., he spent many summers visiting family in Nova Scotia, and his music career took off when he followed the advice of his aunt in Canso to write about his Maritime roots.  Fifteen years after his untimely death in an airplane fire at Cincinnati airport in 1983, the Stan Rogers Folk Festival held its inaugural event in Canso.  It is a tribute to him, drawing thousands of fans from around the region and around the world each year.

StanFest is beautiful. It brings some of the most passionate, caring, and cheerful people together. You drive into Canso and immediately feel the warmth of the welcoming community around you, despite the chilling fog. Hell, maybe the cold weather is one of the reasons that everyone is so tightly knit.

Festival-goers definitely know how to have a good time. Upon our arrival Friday evening, the site was buzzing with activity. Although I had arrived just after the last performance, that didn’t stop music from playing. Bands continued to perform after hours at the festival’s arena and afterwards throughout the camping area late into the night.

One of my favourite things about StanFest is that it opens its arms to a variety of folk music. Honestly, I didn’t even realize that folk music could be anything other than that: folk. But Friday night, I was introduced to alternative-Celtic-folk; Shreem creatively mixed traditional Celtic music and a modern-day DJ.

During the day, the festival had a variety of stages in action at once. Some of these stages were shared between two artists. On Saturday, I heard Roxy & the Underground for the first time and was in awe of their unique vibe. Being fairly new in the Nova Scotia folk scene, I did not expect StanFest to present such a diverse range of music. Then, on Sunday, I listened to the Swinging Belles, a swing band for kids, and The Lumber Jills, a fiddle and step-dance group, share a stage in the afternoon. Both bands captured my attention through their vibrant music, despite the fact that one of the bands was performing for children. People of all ages danced along as they played, proving that there truly is something for everyone’s taste at this festival.

The finale was something to remember. From 7:00 p.m. to 11:00 p.m., Atlantic talent truly shined. Makayla Lynn, Reeny Smith, Rum Ragged and Rose Cousins all rocked the main stage, and everyone was ecstatic. Matt Anderson played afterwards, his soulful voice booming with passion and beauty. During his hit, “Coal Mining Blues,” the Men of the Deeps entered the stage and sang along – a surprise to everyone. The Men of the Deeps are North America’s only coal mining choir, the members of which have all been miners themselves. Afterwards, Joel & Bill Plaskett took to the stage to top off the bill. The finale then consisted of songs sung by the festival’s volunteers, many thank yous from the contributors, and of course various after parties.

Probably the most common theme in casual conversations at StanFest is simply how much the festival means to people. A number of people told me that they have been brought to tears come the end of their stay.  I decided I would ask some artists, volunteers and spectators what StanFest means to them.  Here’s what they said.

“Life.  It’s the only thing I live for. I live here, I grew up here.” – Peter Lumsden (Volunteer)

“Today at singing Stan, I thought, ‘Thank you’” –Judy Lowe

“A mishap; a coincidence” – Dillion Pidgeon

“Depth to an experience” –Duane Andrews (The Swinging Belles)

“When I was turning the corner and drove into the fog, I knew where I was” –Francois Bradette (musician)

“A reunion … this is where I came to high school. This is my home” –Kelly Conway (Spectator)

“The zebra of all festivals” –Joel Plaskett (Dartmouth musician)

To me, StanFest means connection. This festival happens once a year, and it is the one weekend festival-goers are sure to book off 12 months in advance. It doesn’t matter if you are from Newfoundland and Labrador and your campsite neighbours are across the way in New Brunswick. You know you will see each other next year.  There must be magic in the Canso fog because, when you’re at The Stan Rogers Folk Festival, you feel connected too.