Sunday at the Calgary Folk Music Festival (child in tow!) 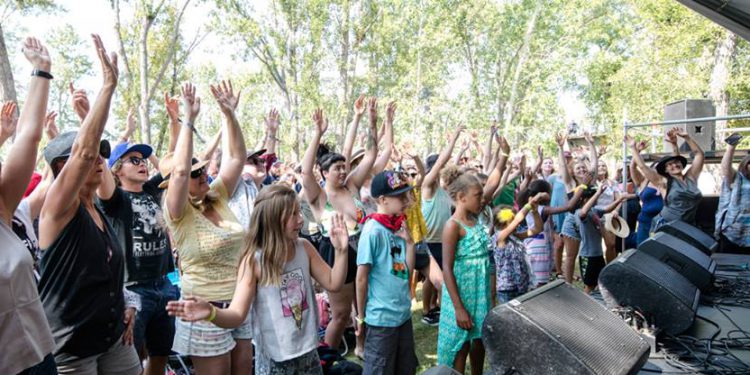 Okay, Sunday morning at the Calgary Folk Music Festival requires an entirely new plan of attack. This starts at home with waking up a rather cranky 12-year-old boy and forcing him to hang out with his dad and listen to live music all day.

I woke my son up at 8 a.m. to get ready, as our Calgary Transit Access bus was due to arrive around 9:30 a.m. to take us down to Princes Island Park. It dropped us at the Sixth Street entrance used by employees and volunteers; one more perk of being a volunteer is you can skip the line at the main entrance.

Since Brenden, my son, is 12, this is the last year he will be free for many of these types of festivals. Children 12 and under are free at the CFMF.

Brenden and I made our way through the park from our volunteer entrance to the main entrance to pick up his wrist band. The lineup of people looking to get into the park seemed to go on forever. With the throng of anxious, hurried, people rushing for the main stage with tarps, festival chairs and various strollers and wagons trailing behind them we decided to wait out the rush before bothering a volunteer for his wristband.

Brenden pulled up a piece of grass beside my scooter and watched the Women with a Why session, which was happening inside the beer garden just inside the main entrance.  He seemed entranced as he sat cross legged on the cool shaded patch of grass we had staked out for ourselves, so I wandered over to one of the now-much-less-busy main gate volunteers and picked up his wristband.  We were now legal.

It was now nearly time for church, as the first performance circled in my program for Sunday morning was The Gospel According To with performances by Shakura S’Aida, Rev. Sekou, Mission Songs Project and the incomparable Mr. Harrison Kennedy. Shakura, along with Reverend Sekou, indeed brought the crowd to church with their bluesy, soulful gospel sounds and messages of hope and faith.  They not only floated gently through the air but were beaten into my heart with soulful intensity that would have this non-believer joining their congregation every Sunday. The three women of the Mission Souls Project were on a whole other level of harmonizing glory as they taught us many beautiful old hymns from down under.  And what can be said about Mr. Kennedy?  Mr. Harrison Kennedy, as he deserves to be called, is one of those talents that cannot be denied. A winner of numerous awards, including the 2016 Juno award for Blues Album of the Year. Sitting in the centre of the stage holding his guitar, he announced he was 76 years old, and he was booked up until 2020. He anchored the show with a bluesy performance that would be unrivaled by anybody. As we left the field once the show was finished, Brenden turned to me and said, “I want to learn to play guitar.”

The temperature was climbing quickly, and Brenden was complaining of not feeling well. Seeing as it was still early in the day, I knew I had to get him cooled down and feeling better or we would both have a terrible afternoon. The ice cold, fresh drinks from the Family Squeezed Lemonade truck seemed to be the perfect remedy to our problems. The very large drinks made with various fresh ingredients like lemons and limes as well as raspberries, blueberries, and mint made for a delicious recharge on a hot festival day.

We now needed a shady spot to rest, and we found that just as Altameda took to their stage. Being that they are from Edmonton, I tried hard not to hold that against them as they rocked the stage, trying their best to wake up anyone in the crowd who may have fallen into a sun and heat-induced slumber.

Though I would have enjoyed watching Altameda’s entire set, our predetermined plan forced us to leave early in order to once again catch two of my new favorites – the Small Glories and Cassie and Maggie – for another workshop titled Four of a Perfect Pair. As we made our way across the park, Brenden turned to me and said “[Troy Snaterse of Altameda[ sounds like Eric Church.’ I replied, “You’re right. I can hear some similarities in his voice.”

The other two groups performing in the Four of a perfect pair workshop were a guitar and fiddle duo named Narrow Fair and legendary cofounders of The Be Good Tanyas Jolie Holland and Samantha Parton. As we were enjoying all the fabulous performances, Brenden turned to me and said, “Who is the one who performed ‘Sweet Child of Mine?’” He was referring to a YouTube video I had showed him a couple of weeks earlier of Cara Luft playing and singing a version of the song on her banjo. I pointed her out to him, impressed and rather proud that he had taken enough of an interest to remember her.  We spent the afternoon wandering through the vendors’ market looking at the various things for sale and stopping at various random locations to listen in on whoever was performing.

Four-thirty p.m. rolled around and we decided to go over to the volunteer hospitality tent for dinner. Another great little perk of being a volunteer is that they will feed you even if you’re not on shift as long as you have your volunteer credentials with you. Brenden and I sat down to enjoy a baked salmon fillet with pasta and salad. Desert was a couple of fresh slices of watermelon and a piece of carrot cake. Like I said before, they feed the volunteers very well, supplying vegetarian and vegan options as well.

After our dinner we left the volunteer hospitality area and ran into Cara Luft one more time as she walked through the food trucks along vendor alley. She waved and said hello again as we quickly passed, going opposite directions. At a festival like this, you are just as likely to run into your favourite artist out in the crowds as you are if you hung out backstage all day.

My Calgary Transit Access bus was scheduled to pick us up from the park at 7:00 p.m., so the last performance our predetermined plan was “forcing” us to see was Shovels and Rope on the main stage from 5:30 to 6:45 p.m. Getting some cool water in him and sitting in the seats provided inside the accessible seating area at the main stage meant that Brenden was sound asleep by their third song. I, however, was not. I marveled at the exciting and impressive husband and wife duo of Michael Trent and Cary Ann Hearst. I had never listened to or seen Shovels and Rope before, but I was told they were one not to miss. Am I ever glad I got to hear them perform. They put on an amazing show. Michael brings a little bit of that old school 60s rock n’ roll flare which compliments Cary Ann perfectly. As I watched and heard them for the first time I thought Cary Ann would be best described as a cross between Janis Joplin and Jo Dee Messina. Shovels and Rope are just as comfortable slowing everything down, and bringing the crowd down with a dark, painful ballad as they are busting out a fantastic take on a Chuck Berry classic like “You Never Can Tell.”Watching Cary Ann sing while playing the snare drum with her left hand, thumping the bass drum with her foot, and playing the keys with her right hand all at the same time was both very impressive and infuriating. Why does one person get to have so much musical talent while I struggle to play the stereo well?

Shovels and Rope finished up their set, and that was my cue to wake up Brenden and head for our pick-up location. As we rode the bus home I asked Brenden what his favorite part of the day was. He said his favourite part was when Cassie and Maggie broke into an Irish folk dance earlier in the day. He loved all the bouncy footwork along with the fiddle playing.

All in all, it was a wonderful day. As Brenden grows, these opportunities to hang together get fewer and fewer. The Calgary Folk Music Festival is a wonderful place to hang out, enjoy each other’s company and make memories. Thank you for a great volunteer experience and for a wonderful four days of beautiful music and memories. I can’t wait to come back next year for the 40th anniversary. See you next year!

The Stan Rogers Folk Festival: is ...