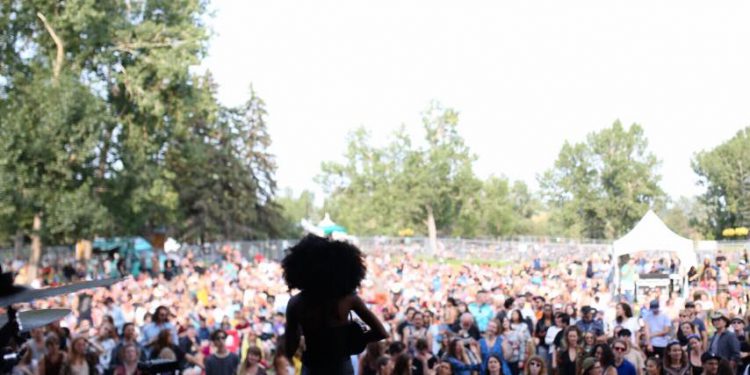 Ok, a plan is definitely needed in order to get as much enjoyment out of a music festival as possible. I pulled out my trusty smart phone with the official Calgary Folk Music Festival app and made a detailed plan of attack. I decided on which artists I wanted to see and made notes about which stages and what times they would be playing. I then went through my CFMF paper program circling everything I had planned and making notes in the likely event that my cell phone battery would not last the day. After about ten minutes, I had my entire Saturday festivities planned, even lunch. Perogy Boyz food truck, look out! I’m coming for you!

Latin and Spanish music filled the air as I found a spot to park my scooter with good shade and good sight lines. Very little chance of angering anybody behind me as I sit quite high in my scooter seat. The Small Glories were set to play in about 30 minutes. A collaborative session titled The Spanish Armada was in full swing on the stage. Carmelo Torres, with his band Su Cumbia Sabanera, was joined by Carolina Slim and Roberto Lopez. The infectious beats of Carmelo’s Cumbia drumming accompanied by the electrifying guitar riffs of Roberto Lopez and Carolina’s sultry soulful vocals were an amazing start to the morning. The crowd was large and energetic, and many people stood and danced in the 10 a.m. morning sunshine.

As the Armada finished and departed from the stage to rousing applause, The Small Glories took to the stage to get ready for their set. The crowd shrunk significantly as people went about their day moving to the next show they were interested in seeing. But as the Small Glories began singing and playing, the crowd quickly grew as people heard the wonderful harmonies of Cara Luft and JD Edwards floating across the grass. JD’s aggressive guitar strumming and foot stomping got the crowd clapping along and tapping their toes. Cara broke out her signature flailing banjo playing dance, and smiles were seen on everybody in the now much larger crowd.

After their show, the Small Glories stayed at the same stage joining the sibling duo Cassie and Maggie, and Lankum, an unmistakable Irish folk band. The three groups, all together, were part of a collaborative session called Celtic (k)Nots. Cassie and Maggie’s sisterly harmonies, combined with their guitar and fiddle skills, were magical – especially when Cara’s banjo started to jam with them as well. Lankum’s bleak style of humor was evident with songs like “Little Tommy Tucker,” which plays with lyrics in such a way as to get the sing-along audience nearly swearing. All three groups took turns thrilling the crowd with their humor, harmonies, and Celtic sounds.

After the Celtic workshop, my predetermined plan said it was time for lunch, and the Perogy Boys food truck was circled in red pen in my festival program. I couldn’t pass up ordering their traditional plate: eight perogies smothered in caramelized onions, double smoked bacon, sour cream, chives and dill. Along with sliced kielbasa sausage. That quenched my ancestral Ukrainian hunger.

After my fill of perogies and sausage, I was off to see The Deep Dark Woods, but due to my extended food orgy, I was too late to get a shady spot to watch from, so I had to move on. The collaborative session Rise Up was just beginning with Quantum Tangle, Mission Songs Project and Saul Williams. As it happens, Friday evening, as I was leaving the festival for the night, I had run into Wakefield Brewster, a well-known local slam poet, performer and friend of mine, who mentioned he was at the festival for the sole purpose of seeing Saul Williams, who he claimed was his main inspiration for becoming a poet back in the day. Saul’s bio in the CFMF app reports that he is to hip hop what Frank Zappa was too rock n’ roll. As a poet myself, I was now intrigued and looking forward to catching a performance. Rise Up, I’m happy to report, was a powerful collaboration, with the three very different yet unified voices delivering an empowering message of peace, understanding and reconciliation – a message that I agreed needs to be shouted from the rooftops all across the world today. I had the opportunity after Rise Up to meet and chat briefly with Saul Williams backstage. I mentioned how refreshing and how important I thought the session’s message was, and he agreed as he appreciatively shook my hand. I thought about asking for a selfie with Saul just so I could brag and needle my good friend Wakefield about it, but I decided against it.

I noticed that the battery level on my scooter was getting pretty low. That’s one of many little annoyances or barriers that I now live with because of my disability. I had enquired earlier in the week if the festival had anywhere a person could plug in and charge a device such as a mobility scooter or wheelchair. After many radio calls and confused and concerned looks on nice volunteer faces, I suggested a power source be added in the accessible seating area by the main stage. That way people could charge up their mobility devices while enjoying the show and not have to sit in some out-of-the-way part of the park.

I made my way through the many vendors selling their wares to the main stage and the accessible searing area, where I was met by a very nice gentleman volunteer carrying a long extension cord. He ran out into the seating area, and I, along with two other fellows, plugged in our devices to charge.

The night passed wonderfully as we were entertained by many great acts such as Kobo Town and African Head Charge. The music and various different rhythms of the groups fired up the crowd and got people dancing. I was actually eagerly awaiting another act though.

The crowd seemed to swell as time went on, and soon, country music legend Leanne Womack walked onto the stage. Country music and I have a long history together going back to when I was six and seven years old, sitting in my parents’ living room listening to Waylon and Willie on the old record player. Leanne thrilled the crowd singing most of her hits, and the entire crowd could be seen singing and dancing as she launched into her biggest hit song, “I Hope You Dance.”

Ruben and The Dark took to the stage right after Leanne and about half an hour before I had to leave to catch my Calgary Transit Access Bus home. While I didn’t get to see his entire set, I did hear his tribute to Tragically Hip front man Gord Downie. I think the entire park may have stopped and sung along with Ruben when he broke into “Bobcaygeon.” It was a nice moment and a great way to end my night.

I can’t wait to bring my son Brenden down to the festival on Sunday and experience more great live music with him.