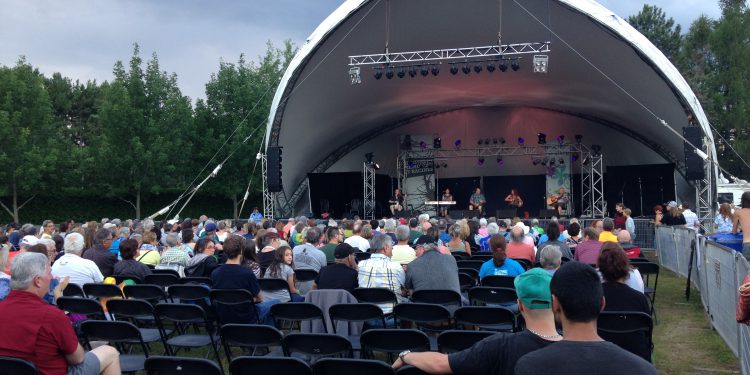 Sunday at Mémoire et Racines dawned bright and sunny, a beautiful day for listening to music in the shade of the ash trees, which, in this corner of North America, fortunately have not yet been affected by the devastation of the emerald ash borer.

In yesterday’s dispatch, we failed to mention Saturday afternoon’s absolutely marvelous parade and picnic table performance of the fifteen-piece band, Gypsy Kumbia Orchestra. Allow me to rectify that before we go any further. Following the late afternoon performance of Réveillons! at the workshop stage down the hill beside the Assomption river, members of the Gypsy Kumbia Orchestra led the capacity crowd slowly up the hill to the centre of the festival site, performing the whole way. There were drums, dancers with huge circular skirts whirling, trombones and trumpets, accordion and fiddle. The theatrical way this band conducts their performance is absolutely a crowd pleaser. They have choreographed movements while they play, and every move is with purpose, right down to the facial expressions of the musicians. Once the band reached the centre of the site, within spitting distance from the food area, they mounted picnic tables and performed some more, surrounded by the delighted crowd.

Sunday morning for us began with six violins on a workshop stage. Some of the best fiddlers in Québec treated us to great tunes. Pascal Gemme, Marie-Pierre Lecault, Richard Forest, Isaac Beaudet-Lefebre, and Robin Boulianne, all from Québec, were joined by Matt Gordon from New York. They started off with a blast of tunes – “Reel Issoudun,” followed by “Reel Mattawa,” which was composed by Richard Forest. Pascal Gemme remarked afterwards how that reel is now played in sessions around the world. It was very cool to see the shyly proud look on Richard’s face.

The violin workshop continued for the next forty minutes, each fiddler masterfully playing lovely tunes, including another composition by Richard, the beautiful “Berceuse Pour Hannah” written for a child in Owen Sound who gave up her bedroom one night for this visiting musician.

Pascal Gemme cross-tuned his fiddle to make it ring sympathetically, and then got the whole gang to play “L’Air Mignonne” by Simon Riopel. Such gorgeous tunes, the audience was sent into another dimension. Matt played a fun piece from South Carolina with the wicked name “Johnny don’t get Drunk,” and Isaac played his own composition, “Drops of Frenzy.” Way fun. Robin (on viola) and Marie-Pierre played their own compositions, very modern pieces with classical overtones. The audience ate up every bit, and the workshop closed to wild applause when the fiddlers played “Le Grande Gigue Simple” (a Brandy – a wonderful reel in 3/4 time) and Matt Gordon, like a puppet on a string, danced a loose and charming flatfoot stepdance.

Next up was a workshop of button accordions, most diatonic and one chromatic, which meant that only a couple could actually play tunes together. But each of the five accordionists did an awesome job, showing off their fingering skills on these instruments that really make your head ache when you try to play them. The accordion is perhaps the second favourite instrument in Quebec after the fiddle. There were the Québecois reels and jigs, of course, but also Métis tunes and Breton music from the west of France that is simply mesmerizing. The take away from this workshop was that this music is simply made for dance. Whether you are dancing squares, contras, step dance, or gavottes, this music is simply full of driving rhythms that just lift your feet and make you move. As the Québecois dance callers say: SWING!!!

Rivière Rouge is a four-piece band based in Québec that plays the music of the Métis people of Manitoba. Accordionist Justin Bell came from Manitoba and brought with him the music of the Métis that originated from the fur trading days when French traders married and had children with Indigenous peoples. There are crooked tunes and call-and-response songs that are French with a slightly different flavour. “The Red River Jig,” for example, is yet another version of “La Grande Gigue Simple,” or is it vice-versa? Rivière Rouge’s workshop stage performance was well received by its audience. There is such great energy in those crooked tunes.

We also had the great privilege of witnessing some of Matt Gordon’s teaching workshop for Appalachian flatfooting. A large circle of dancers surrounded Matt and his banjo and guitar-playing musicians and learned the essential elements of flatfoot dance. It was fascinating to watch Matt, who does not speak French, teach fluently and with humour, while speaking nary a word. What a talented guy.

It was a packed house at the second fiddler’s workshop. This time, there were six fiddlers, including Appalachian, Québecois, Ukranian, and Swedish. The assembled performers included a nyckelharpa player (Alex Kehler), and the audience pretty much swooned when they heard that lovely keyed fiddle with it sympathetic resonance strings. Again, this workshop demonstrated some very fun relationships between dance and music. The Ukrainian fiddler made the direct connection, and everyone got to their feet with his rousing tunes from Eastern Europe.

The afternoon was made complete when Genticorum took to the stage at the bottom of the hill by the river. Their lovely tunes sounded so perfect on the acoustic stage with the breeze from the river rippling through the nearby trees. Genticorum’s audience was delighted with a different set of tunes today, rather than hearing a repeat of yesterday’s main stage performance, as many groups might have played.

The Sunday evening main stage included two bands specializing in energetic and exciting Quebecois call-and-response singing. Artifaille and Grav’O Portes charmed the crowd, who were delighted to sing the responses. Low Lily from Vermont did their delightful set of songs and tunes from the Appalachian mountains, making us think that they really did come from another time and place.

La Suite, a duo of violinists from Québec, made their mark playing fiddles and viola. Fiddle tunes and original compositions arranged in a classical style made the audience sit up and take notice. Marie-Pierre Lecault and Robin Boulianne alternated between violin and viola and sounded like a much bigger orchestra, especially with Robin’s foot percussion. Theirs is a very contemporary take on traditional music, showing us that there is indeed an intersection where fiddle and classical music collide in an interesting and beautiful way.

The final band, Réveillons!, closed the main stage just as rain clouds moved across the festival site, and then fiddlers, accordionists, banjo players and guitarists moved into the covered areas to escape the showers and began to play. Tunes will carry on into the night while the children sleep and the festival crew begins their take-down.

Until next year! À la prochain!