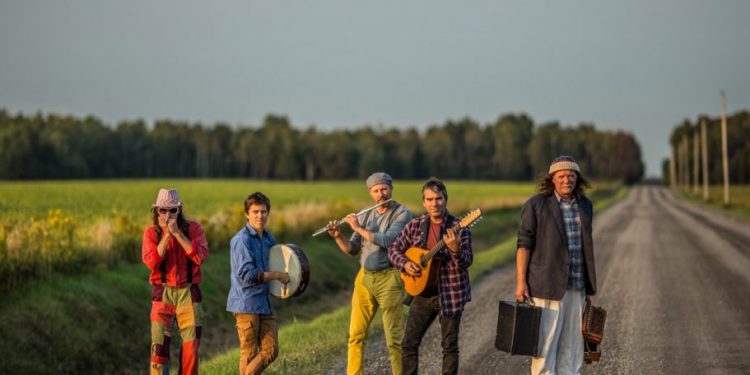 After a week of torrential rain in the Lanaudière region of Québec, Festival Mémoire et Racines opened with gorgeous warm sunshine leading to spectacular performances on Friday evening.

This festival is located right in the heart of Quebec’s traditional music community, Joliette being home to the CEGEP folk music college which has given birth to a whole new generation of trad musicians.

Camp Violon Tradquébecois was first up. Imagine 120 musicians on the Gilles Cantin Main Stage, mostly fiddlers from ages eight to eighty, with guitarists and piano accompanists. The audience filled up the seating faster than you can say ‘trad music’ just to hear these fantastic amateur musicians showcase the tunes they learned during the week at the camp in St.Côme, north of Joliette. Camp is no longer just for kids, and these mostly adult musicians showed their stuff, which included a number of great reels, jigs, crooked tunes, and a beautiful air composed by camp co-founder André Brunet, member of Le Vent du Nord.

Next up was Robert Legault et Les Mercenaires du Terroir. Let me assure you, these guys had absolutely nothing to do with militarism or terrorism. Hirelings of the land might be a translation, but the drive and energy these fine musicians bring to the stage is amazing. They certainly are down to earth – five guys playing their hearts out on two guitars, four fiddles (with different tunings), and ten harmonicas. Their repertoire of crooked fiddle and harmonica tunes rooted in the Lanaudière region, where the festival takes place, was pretty astounding.

Third on the main stage was the Appalachian music duo Matt Gordon and Leonard Podolak. This was captivating old time music indeed. Both Matt and Leonard are experts on Hambone hand/body percussion, and gave a breathtaking performance. Old time banjo tunes, flat foot dancing, and wicked harmonica playing rounded out this act, which received a standing ovation.  If you weren’t a fan of old time music before this, you certainly are now.

Fourth up was Les Tireux de Roches – another quintet of excellent musicians, this one with an astounding gravel-voiced lead singer – who plays button accordions – and a very colourful harmonica player. Their set started out more reflectively than in past performances we have seen, with flute, saxophones and a terrific percussionist with multiple kinds of drums filling out their sound. A new maturity to this band’s music is evident. But it wasn’t long before they were rocking the festival. Dancers took over the east side of the audience as exciting arrangements of traditional fiddle tunes and call-and-response songs excited our ears.

A wonderful tweener act came onto the side of the main stage as preparations were made for the finale of the evening. La Foulée, the traditional stepdance group of Lanaudière, charmed the audience. Four step dancers, including champion Elisabeth Moquin (also their fiddler), barely worked up a sweat showing off both their choreographed dance steps and improvisations. The audience loved it.

Finally, the Gypsy Kumbia Orchestra took the stage. A visual and sensorial feast indeed it was, with this fifteen piece orchestra of music and dance from Colombia and Eastern Europe. Whirling dancers with extravagant costumes threaded their way through horn, clarinet, and fiddle players and percussionists dancing in choreographed rhythm while playing the music. This was a wholly theatrical performance by the musicians themselves. It was at once energetic, riveting and engaging. There were obviously fans who had seen them before, emulating the band’s dance moves and enjoying the moments when the musicians made fun of themselves, posing for photo ops during their performance.  Long after their official performance was over, the band continued to entertain off stage within the mass of dancing fans. It was quite the show from these very talented musicians and dancers.

And, within the nearby dance hall, Québecois square dances were in full swing for most of the evening. The renowned band Réveillons provided the music, while its bohdran player Jean-François Berthiaume taught and called the dances. The hall was full of dancers having a ball with the rhythms and patterns of these fascinating dances.

And so went the first day of the Festival Mémoire et Racines. Two more days to come!

Five memories from a life in music ...