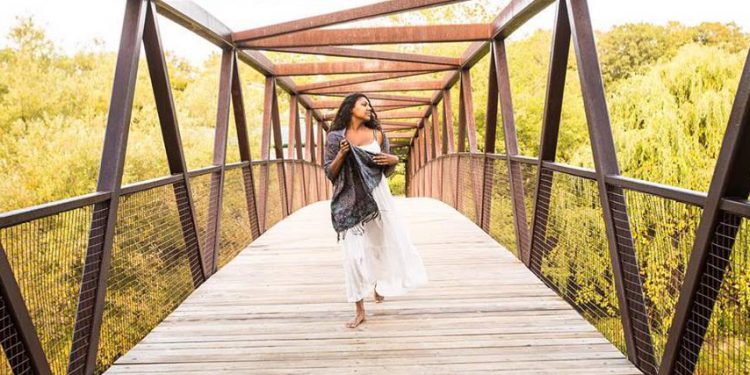 Her brand new single and accompanying video, “Just Fine,” drop today, and the award-winning singer-songwriter is looking forward to having her new music out in the world.

The instantly captivating “Just Fine” was written by Desirée and Cody Taylor – who also produced and mixed the track – and it departs from previous songs in that it doesn’t feature ukulele. Instead, it moves from a minimalist piano-and-trap-drums sound into a soulful, gently percolating R&B jam. There are catchy sonic touches sprinkled throughout, like the slyly insinuated choral vocals in the middle, or the subtle swelling of single piano chords. It’s uplifting, refreshing – and courageous – to have her voice unadorned in the mix, and a testament to her vocal skills that she pulls it off.

There’s a strong message throughout the song about finding the strength within that allows you to move forward, no matter what the situation. It talks about struggling between being safe and being daring and integrating both of those different parts to find one’s true intention and direction.

“I’ve been watching as different parts of my head and heart are constantly in battle, and I realized I am not alone in this journey,” Desirée explained.  “So many other people feel this rollercoaster of emotions every day too. This song came to be after a writing session where my specific goal was to express myself authentically. Now that ‘Just Fine’ is going out in the world, my hope is that it will connect with the listener and empower them to feel seen, heard, and to keep moving forward!”

Desirée – also a yoga enthusiast, who employs her live music as a healing tool – is a deeply  thoughtful artist, who, as she puts it, “hails from Vancouver, the unceded, ancestral, and occupied, traditional lands of the Coast Salish peoples.”

She makes a point of having every song be honest and emotionally charged and is passionate about healing as a collective, using the power of music to impact listeners. Her music has managed to
travel the world over and has landed her some prime exposure at festivals all across Canada, as well as opening spots for many prominent artists in the Vancouver scene.

She’s had quite a ride since her 2016 CBC Searchlight Competition win for her song “Hide.” That was her first solo single on CBC Radio, iTunes and Spotify. The track made it onto the Top 100 Songs of 2016 and essential songs of 2016 list on the CBC website/radio station. It hit more than a million streams on Spotify this past winter. Two more songs were added to the CBC Radio 2 Top 20 playlist: “Wild Heart” and “Where Do We Go.” All three songs are from her widely acclaimed debut album, Wild Heart.

Listen to this year’s ‘Songs from the ...