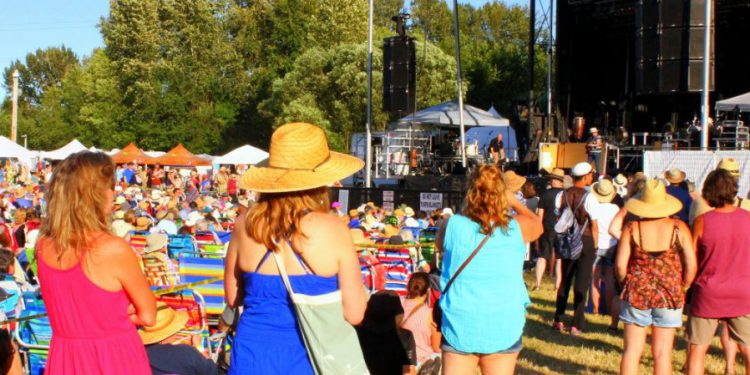 Photo by Keith and Heather Nicol.

This recap of the Vancouver Island Music Fest is an abridged version of three separate days of daily reviews published by bloggers Keith and Heather Nicol at their travel blog. You can see the full, original write-ups – and more photos! – at http://keithnicol.blogspot.com.  Thanks for sharing this with us, guys!

We headed down to the Exhibition Grounds in Courtenay on Friday evening with my brother and his wife, who had just driven from Victoria. The sun was out, but there was a cool north breeze, which made for ideal “music listening” weather. We headed to the main concert stage just in time to see Irish Mythen setting up for her 6:45 p.m. show.

We spent the whole evening there and enjoyed all the performances. Troubadour Mythen was followed by the U.S. group The Dustbowl Revival, with their large group of eight, which included horns, bass and fiddle.

At 9:30, the energetic StepCrew took to the stage with step dancers and fiddles. Musicians in the group have won major fiddling awards and played with the likes of the Chieftains.  Say no more! Since we are big Celtic music fans, we thought their performance was very impressive. StepCrew at MusicFest. Photo by Keith and Heather Nicol.

The night ended with Walk off the Earth from Burlington, Ont. Their YouTube channel has close to 3,000,000 subscribers, and they are Juno Award winners.  An amazing opening night with lots more to come.

Despite a special weather statement warning about the heat wave that had descended on Vancouver Island and most of B.C., MusicFest sold out its Saturday shows again this year.  It was certainly hot at the exhibition grounds, but if you managed to find shade and keep hydrated, it was actually pretty easy to stay cool. It was helped by the amazing hosts, who even came around with water misters that they would spray on your arms, legs and face if you wanted them to.

We also stuck to shady sites for part of the day and really enjoyed Campbell Woods and Mike Kerr, followed by Gretchen Peters on the Woodland stage. These folk singers, from Canada and the U.S. respectively, fit this small venue perfectly.  Since we enjoyed The StepCrew the night before, we thought we would check out their workshop on step dancing held at another shady venue: The Crossroads. They packed that venue and had many people up trying their hand – or should I say feet – at step dancing. We then headed for the main stage to see Canada’s only all-female country/rock band, Nice Horse from Calgary, who put on a great show.  We will keep an eye out for that group in the future.

We then decided to take a break and head home to get ready for the concert bowl evening set, which included a wide range of international music including Darlingside from the U.S., Noreum Machi from Korea, Passenger from England, Ry Cooder from the U.S., and ending with Skakura S’Aida, who was born in Brooklyn, raised in Switzerland, and now calls Canada home.  Can you get any more varied than that?

Since MusicFest offers five stages running at the same time, it is often a challenge to figure out where to go to hear the music you are interested in. Since we moved to the Comox Valley three years ago from Newfoundland, we always have an affection for listening to fiddles, jigs and reels. Newfoundland is known for its kitchen parties, and there was a kitchen party of sorts at the Barn at 10:00 a.m. on Sunday, when four groups got together to play. They included the Fretless, The StepCrew (which we had seen earlier), The Atlantic String Machine and Qristina Brooke, which all feature lots of fiddles in the mix.  The Atlantic String Machine was hard for the others to join in on, since they play classical music, but all the others often played music they knew the others would be able to join in on. The volume of all those strings made for a memorable session, and the StepCrew’s awesome step dancers made it especially lively. Darlingside at MusicFest. Photo by Keith and Heather Nicol.

From there we stayed in the Barn to hear another mix of musicians thrust together to play under the theme of “Influences.”  Elage Diouf did an amazing job of coaxing the others to join in, and it made for another fun session.

After hearing the award-winning Fretless in the morning, we wanted to catch them again at the Grassy Knoll in the afternoon.  This venue has had a welcome makeover since last year and included a huge tent, which we all appreciated to help us get out of the sun (Sunday’s temperatures hit 30 celsius, which made it even warmer than Saturday).  It also included beer service, and kids were still allowed in, which allowed families with children to have a drink.

After a break at home, we returned in the evening to the main concert bowl to hear Three Women and the Truth, Arlo Guthrie and The Bros Landreth.  The first two sessions, it felt like we were in a time warp since Three Women and the Truth is made up of Mary Gauthier, Gretchen Peters and Eliza Gilkyson, who are all folk singers whose songs have been recorded by Joan Baez, Bob Geldof, Jimmy Buffett and many others.  Next up was Arlo Guthrie, who brought us back to Bob Dylan days with songs like “Hey Mister Tamborine Man,” as well as his best-known songs “Alice’s Restaurant” and “City of New Orleans.” The Bros Landreth hail from Winnipeg, and they are another Juno Award winning band known for their bluesy soft rock music. We didn’t catch the last performer of the festival, Exco Levi and the High Priest, a well-regarded reggae musician, since the late nights were catching up to us.  All in all, it was another great MusicFest, and we look forward to seeing what the organizers have in store for next year.

Keith and Heather Nicol blog about travel, mostly involving outdoor activities like hiking,sea kayaking, cross country skiing, alpine skiing and other activities. They also enjoy traditional music and cultures. They have written over 800 articles in various magazines and newspapers and are frequent contributors to Ski Trax and Saltscapes Magazines. Keith Nicol has also written two books and has a popular you tube channel http://www.youtube.com/user/k2nicol