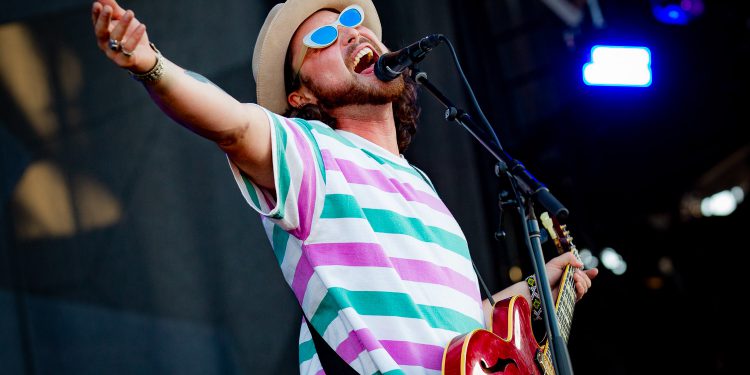 The Spencer Lee Band at Bluesfest. Photo by Mark Horton.

I hit Bluesfest again last Tuesday among the sea of people flooding the grounds.  Winding my way through the line, I kept passing a guy in a sort of psychedelic t-shirt.  What did it say?

“When the power of love overcomes the love of power, the world will have peace” Jimi Hendrix

First on my list of people to see was virtuoso Catriona Sturton.  Catriona, switching from guitar to violin – which she strummed – performed a wonderful blues harp infused set for us all under the big tent. It’s the honesty with which Catriona performs her music that is so appealing to me.  You feel those wonderful stories she sings. Catriona Sturton performing at the RBC Bluesfest in Ottawa on Tuesday, July 10 2018. Photo by Scott Penner.

Seeing this next band, I began to believe the Hendrix quote.  I thought I’d traveled back in time to the Monterey Pop Festival, with the smell of medically-prescribed marijuana in the air, four guys on stage, long hair, colourful costumes, extended guitar solos and a sound as close to Led Zeppelin as any band I’ve heard in years.  Said band, Greta Van Fleet, were a real treat to take in.  Hailing from Frankenmuth, Michigan, these three brothers and a friend are the spark that could revive a rock and roll fire.

Dave Grohl and the Foo Fighters stormed onto the stage, dancing and screaming into the night, bringing more fun than I’ve ever seen brought to a live music show, ever.  They covered their entire discography over the close to three hours, singing at least a song from each album. In the end, as the crowd applauded for an encore, Dave and Taylor appear on the big screen, musing silent theatre-style, Dave stroking his beard, over whether or not to return to the stage and how many more songs to play.  It was hilarious!

The Foo Fighters despite their considerable talent were not the best musical performance I saw this week, but they did remind me of the importance of levity, humour and just “good old fun” when it comes to musical live performance. I heard as I entered the grounds Wednesday The Spencer Lee Band, and they sounded great, with two lead vocalists singing “With a Little Help from my Friends.” A bit of funk, and a little bit of rock.

Before Dave Mathews hit the stage, I thought I’d check out what was under the tent and was pleasantly surprised by a pop duo I’d never heard of before: Oh Wonder.  Oh Wonder are London-based Josephine Vander Gucht and Anthony West, and their style combined 80’s synth stylings, catchy beats, singable lyrics and nice melodies.  They were enchanting and charmed the younger audience, who seemed to know all their songs.

The Dave Mathews Band’s performance was technically strong but unfortunately lacked the connection I experienced this week with many of the other bands.  Even their encore seemed a little self-indulgent with two songs only die-hard Mathews fans might recognize.  Perhaps just an off night for him.

One thing I’ll leave with from this week:  The power of music to energize you and make you feel a renewed optimism for taking on life’s challenges is a force to behold.  Signing off from Ottawa’s Bluesfest.  Happy festivalling. We’ll see you out there.