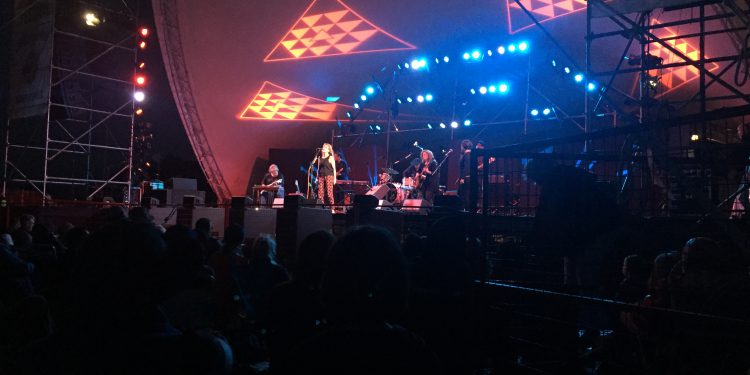 Is there a more beautiful setting for a festival than Jericho Beach in Vancouver? From the comments of every performer who gets up on the main stage at the Vancouver Folk Music Festival, I think not. It’s got water, beaches, mountains, trees, wooden pedestrian bridges over ponds, blue sky, puffy white clouds, a shimmering downtown in the distance, spectacular sunsets, and friendly volunteers to tell you which recycling bin to use so you don’t stand dumbfounded for minutes trying to figure out if what you have is compostable (okay, so maybe every festival has this last one now? at least in Canada I presume). Jericho Beach is possibly one of the most beautiful festival locations in the world. Photo by Deborah Holland.

I made it just in time for the main stage evening show (running too late to bike so splurged and took a cab). First on was Darlingside, a band from Massachusetts I was supposed to see open for Brandi Carlisle some months ago, but she had to change the date, and so there was a different opener. Darlingside is well, darling. How can you not love four earnest 20-something-year-olds playing a genre of music that is 180 degrees from Top 40. Singing in exquisite four-part “sibling-like” harmony (when the blend is so good you can’t tell who is singing lead), and standing around one vocal microphone (an old bluegrass tradition that seems to have come back in fashion), they took us through a set of songs that I would describe as a mix of Simon and Garfunkel, the Beach Boys (the harmonies), Mumford and Sons, and Bon Iver.

Members Don Mitchell, Auyon Mukharji, Harris Paseltiner, and David Senft took turns talking to the audience and singing lead, each one as charming and entertaining as the others. I counted nine instruments on stage. The core is acoustic and electric guitars, electric bass, mandolin, and violin, but they include classical elements (cello) and some songs with electronic loop-like, synthesizer backing tracks. Darlingside was a fantastic opener for the festival and I’ll definitely be watching for when they return to Vancouver. Next up was Three Women and the Truth (a play on the saying that in country music you just need three chords and the truth, but as they laughingly pointed out, the acronym, TWATT, points in a different direction). Singer-songwriters and solo artists in their own right, Mary Gauthier, Eliza Gilkyson, and Gretchen Peters have come together as an “in-the-round” (each presenting their own songs in turn) and lending harmonies to each other’s songs. I’ve seen Mary and Eliza many times but only knew Gretchen by name. It’s easy to see why the three thought this would be a good mix. Musically and in lyrical themes (political, human, at its best) they have many similarities. All three are stellar performers, singers, and writers, and it would be hard to single out any one highlight, but Mary Gauthier’s song about a Veteran getting free breakfast at a Waffle House on Veteran’s Day, and her classic song “Mercy Now” were real gut punchers. Yes! The best veggie burgers in the world are there! Photo by Deborah Holland.

For the life of me I can’t figure out how James McMurtry is still mainly unknown even to roots music aficionados. I saw him here in Vancouver a few years ago, and he is definitely one of the finest songwriters out there today. You also never hear him mentioned when people talk about great guitarists, but he is also that. Backed by as tight of a rhythm section as you’ll hear, his music is slinky, swampy and sexy, but instead of simple blues lyrics, it’s filled with lyrical poetry (think Highway 61 Dylan). McMurtry’s set was also the first opportunity for people to dance, and as at most folk festivals, this can be highly entertaining to watch or participate in. James McMurtry on the main stage. Photo by Deborah Holland.

Before I get to the closing act I need to interject a rant. Why do people pay good money to go and hear music and then talk non-stop while it’s happening? Why would someone get to a festival early to sit up front and then lie down facing away from the stage? These are, of course, rhetorical questions. In the world of entitlement, no one thinks twice about yelling on their phones to their friends to say where they’re sitting in the middle of a song, or to have “catch-up” conversations in voices even louder so they can hear each other over the music. OK. Back to the closing act.

Neko Case. The temperature has also dropped 10 degrees and a wind is blowing. Everyone is bundling up. Suddenly there’s a sea of people without gray hair, and it’s obvious this is who they came to see. I’m not sure why but Neko Case has never been on my radar. I heard of her more when I moved to Canada (I thought she WAS Canadian) in her association with The New Pornographers, so hearing her live was a complete new experience for me. I had a blank slate to start with. For those of you who are fans you already know what a strong voice she has, and that her style is difficult to describe. Indie, folk, rock, country??? If I use the words quirky and unusual, know that I mean this as the highest compliment, in that she falls into a category all her own. I cannot peg her musically or lyrically, and what a delight that is. I look forward to delving into more of her catalogue. She also had a fabulous six-piece backing band including back-up vocalists Rachel Flotard and Shelly Short, who harmonized Case’s sometimes challenging melodies with ease.

I grabbed the bus home with a crowd of other festival-goers who all seemed to have as good a time as I did, too tired to do anything but take my dog out for her last walk. It is not a VFMF without the stilt walkers.