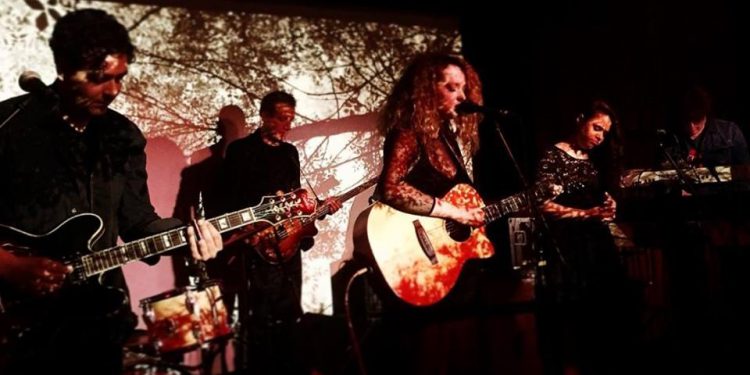 “Don’t you know, they’re talking’ about a revolution,” sang Tracy Chapman rhetorically.  “It sounds like a whisper.”

The Winnipeg Folk Festival didn’t start the gender parity revolution, but with over 70 acts, it is the largest festival to join.  But it didn’t shout it from the roof tops or even issue a press release.  It just did it. For the first time in its history, the festival achieved gender parity, with half the acts at the festival featuring women.  And no one would have been the wiser if it weren’t for Madeleine Roger, one half of vocal duo Roger Roger, who praised festival organizers during their main stage set.  She may have been the first to announce it to the crowd, but it was a hot topic in many conversations this weekend amongst audience members and artists alike.  Lanikai’s Marti Sarbitt and Ricky Valentine from Five Alarm Funk pretty much summed up how everyone felt. Marti Sarbitt of the Winnipeg band Lanikai poses for a selfie with Broose Tulloch of Roots Music Canada and the radio show Beer for Breakfast on UMFM.

“Gender parity is important, not just in music, but in all areas because the next generation grows up to believe they can do anything,” Marti began. “It’s not like someone is deciding that more woman should be singing. It’s the idea of seeing more women on stage or as sound techs or any position. People are now realizing that woman have capabilities, so I think that it is happening,” she said. “It’s what’s gotten us to this point, [but] we have further to go.”

“It’s important to hear the all voices of society at these festivals – how everyone thinks and expresses themselves, and not just 35-year-old white men, like our band, which has eight.”

The final words went to Marti Sarbitt, who summed up quite accurately how everyone, audience and artists, seemed to feel, “I look forward to when we don’t need to discuss this.”

Discover this Italian alt-folk duo at the ...

Dispatches from … home … before leaving ...