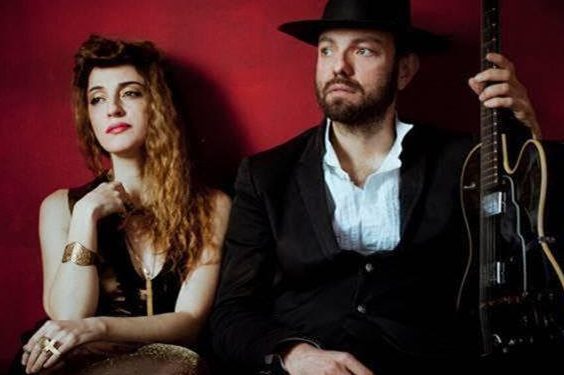 Francesco Forni and Ilaria Graziano, both originally from Naples, met at the onset of their careers. They continued to encounter each other in various different projects and eventually decided to create an acoustic duo together. Since the 2015 release of their debut album From Bedlam to Lenane, which was a huge success in Italy, they’ve become a truly international duo, playing throughout Europe – in France, England, Switzerland, Belgium, Hungary and the Czech Republic. Their first appearance at the Mundial Montreal Festival in late 2017 marked the beginning of their efforts to conquer North America, which brings us to the present album release and Canadian tour.

Twinkle Twinkle is their third album, released in March of 2018, three years after their sophomore album, Come to Me. Their new material was essentially written while on tour over the last two years.

“This new disc is more personal and direct than previous albums. We have shifted our focus towards other sounds while preserving our minimalist approach,” said Graziano and Forni. “Twinkle Twinkle reminds us that even in the most difficult moments of our life, we have always had a light to keep us company.”

Highlights on the album include the acoustic slide blues, unison vocals, and primal rhythm of the first track “Chains,” which combine to form an irresistible whole. Built on a briskly percolating rhythm guitar, “Be Mine” finds Francesco and Ilaria alternating verses on this sinewy, sensual number. “Sospesi” is a dark fairytale two-step, a hushed piano dirge with more than a hint of Morricone. It’s as Italian as it gets. “Your Eyes On Me” plays Ilaria’s sweet voice against a minor-key, country-folk ballad that conjures an atmosphere of foreboding even as it moves to its brassy crescendo. “La glace et la neige,” sung in French, offers a funky Afrobeat rhythm and tribal vocal arrangement that finds the duo rapping percussively in unison.

The duo’s folk/blues repertoire spans the territory from Mexico and Texas to Argentinian tango and Neopolitan song, to the South of Italy or Eastern Europe. Similarly, Francesco and Ilaria’s performance fuses a captivating mix of languages, from Italian to English, from French to Spanish, and occasional dialects from Southern Italy and Eastern Europe too.

Listeners might readily compare them to other male/female musical duos such as The Whites Stripes, Gillian Welch and David Rawlings, or Isobel Campbell and Marc Lanegan.

Ilaria and Francesco craft original pieces with minimal elements, and their extensive experience in scoring for theatre and movies is evident in the dramatic, emotional quality of their songs.

Their sound can’t easily be placed into any musical context.

“Both of us learned by listening and playing different genres of music, coming together artistically enabled us to share these influences,” Forni and Graziano explained. “We have chosen to filter all of these elements using only voice and guitar and a few other tools to add colour and other languages depending on the emotions we want to communicate.”

When Ilaria’s rich and wide-ranging dulcet tones meet Francesco’s deep, bassy vocals and incendiary guitar, the result is utterly compelling. Their unique live performances linger long in the hearts and minds of their audiences.