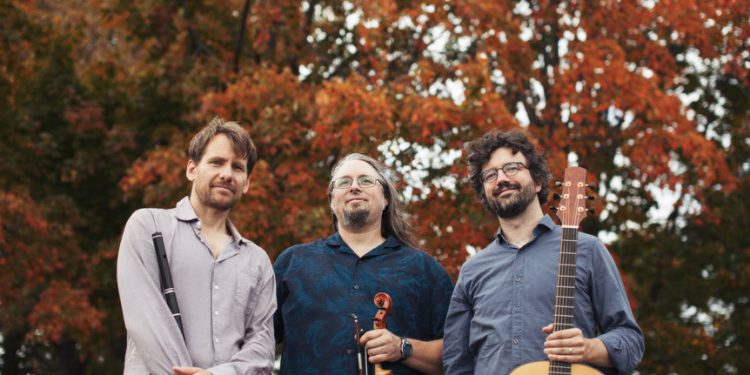 For over eighteen years, audiences all over Canada and around the world have delighted in the music produced by this trio from southern Québec. Genticorum has performed over a thousand concerts in fifteen different countries, presenting the exciting traditional music of Québec, (which is considered to be “world music” everywhere else,) to a global diversity of audiences. The reviews are stellar everywhere they go, and listeners love the humour, charisma and boundless energy of their live shows.

Headed by fiddler Pascal Gemme, with accompanist Yann Falquet, the band has grown musically. Five years ago a shift in the Genticorum continuum saw long-time flute player Alex de Grosbois-Garand move on to other musical interests. Stepping in to more than capably fill those shoes is Nicholas Williams, who has brought new flavor to this musical smorgasbord of Québecois trad combined with what you might call “new trad” – fresh compositions in the traditional vein.

Pascal Gemme (fiddle, feet and voice) wanted to play music from the time he was a child at his fiddler grandfather’s knee. But today, he doesn’t just play those traditional tunes with verve, offering singularly effortless interpretations and great arrangements, he is also a marvelous composer, creating new tunes in the traditional vein. Yann Falquet (guitar, guimbarde, diatonic accordion, voice,) has not only developed a wholly unique and beautiful style of guitar accompaniment, but is also a lovely composer in his own right. Nicholas Williams (piano accordion, flutes, voice,) seems to be able to play anything you put in his hands, and he’s also a terrific composer and vocalist.

It’s taken four years for the new band to gel, to be comfortable enough that they could have an intuitive sense of how to play well together. Said Pascal: “We wanted to have time to really lock in musically with Nicholas. We played a LOT together during those four years. … In some ways, putting together this album (the sixth for Genticorum,) was like it was a first album all over again.”

It eventually took two years for Avant L’Orage to come to fruition.

“We wanted to have each musician contribute equally to the final arrangements,” explained Pascal. “We wanted to create a true fusion of our collective experiences as professional musicians and incorporate Nicholas’ expertise in harmony singing and band arrangement into the collective.”

Each of the musicians brought tunes, songs and compositions to the group for consideration. They took their time, testing out the material in live performances, and then looking for the thread that bound the best ones together. From this process, the title Avant L’Orage – Before the Storm – emerged. It refers to the feeling of heaviness and tension in the air, Mother Nature holding her breath, waiting for the inevitable discharge of electrons. The idea and the feeling are replicated in the arrangements, full of nuances, tension and expectations. This intensity is captured fully in “Reel Lenoir,” a kaleidoscopic, trance-inducing composition – a collaboration from all three band members.

That tension carries through the song lyrics on the album. There are tales of peril and impending doom. A young woman is married against her will. Picking roses results in a broken leg, which can only be healed by a questionable medical practice. A couple in love perishes in a shipwreck. Another couple, walking on a mountain, is to be separated by a death, and a naughty buckwheat miller lures young maidens inexorably to their doom while the creaking sails turn in the wind. The band weaves as counterpoint intricate interplay among fiddle, accordion, flute, guimbarde and guitar and conjures colourful harmonies among their voices. It’s beautiful listening, even if you don’t understand the French lyrics.

Now that Nicholas has joined Genticorum, the band’s musical colours have grown to an entire rainbow, made possible by the addition of the two accordions as well as Nicholas’ massive experience in singing harmony, performing world music, playing and arranging for contradance bands, and playing multiple kinds of flutes.  Avant L’Orage is nothing short of wonderful listening. It’s a testament to the talents of these gifted musicians that they’ve managed to again capture Genticorum’s signature sound while at the same time broadening the colours and capturing the ethos afresh.