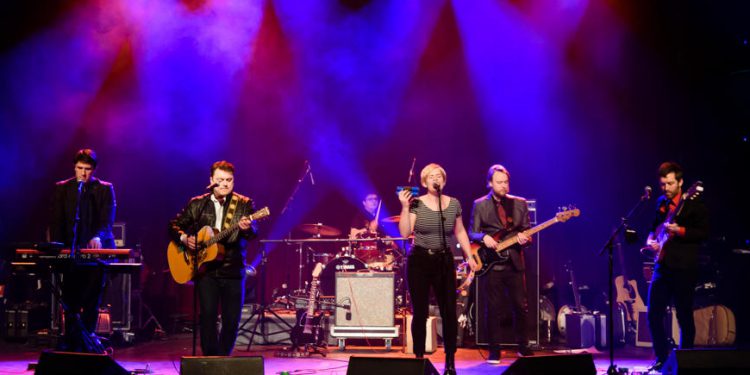 On their brand new fourth studio release, the six-song Sunshine EP, Alberta roots-pop collective The Hearts once again delivers memorable pop melodies and moody folk harmonies suited to dive bars, soft seat theatres, international folk festivals and everything in between. What sets them apart is just how easy their down-to-earth songwriting rests against a backdrop of stylish cosmic textures — six standout musicians blending into one unshakable sound. You can get a taste below with their performance of the EP’s title track captured at Edmonton’s Empress Alehouse for Northern Sessions.

The Hearts are comprised of Jeff Stuart, Dwayne Martineau, Gavin Dunn, Christopher Quesnel, Brad Tebble and Alex Vissia, and Sunshine was recorded at their home studio in Edmonton, Alta. Written, arranged and performed solely by the group, the EP was produced by guitarist Gavin and mixed by American producer and engineer Sam Kassirer (Josh Ritter, Joy Kills Sorrow and many more).

The Hearts’ music has been featured in HBO and MTV productions, received international critical acclaim and charted on radio all across Canada. Their 2015 album, Equal Love reached #1 on CKUA Radio and landed on Earshot’s Top 30. They’ve toured extensively and performed at many international festivals and events, including SXSW, Edmonton Folk Fest, Calgary Folk Fest, Interstellar Rodeo and many more. They’re revered for delivering an exciting live show where they trade, layer and cohere splendidly — mixing equal parts glitter and grit.

The band has a handful of shows booked so far for the summer, with more to be announced for the fall. Stay up to date at www.thehearts.ca.