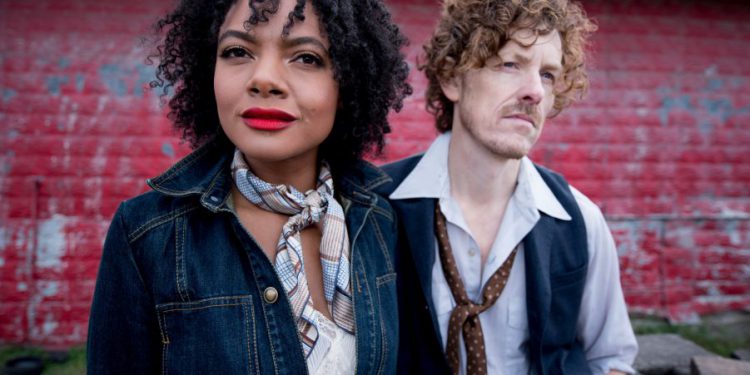 It was a Wednesday afternoon in early June when I was asked to listen to a new record from a band I had never heard of before. I decided that, before I researched anything about the group, I would give the album an honest, virgin-eared listen.

The sun was shining down through a blue sky, lightly dotted with small white clouds. It was a perfect afternoon to take my long-haired chihuahua, Daisy, for an afternoon walk. It was also a perfect afternoon to listen to some new music. I put Daisy on her leash, plugged my headphones into my phone, and headed out into the pleasantly warm Alberta sunshine as the album Love in Wartime by Birds of Chicago began to play. I had no idea what to expect.

The album opens with a little ditty titled “Now/Sunlight,” which runs about a minute – a beautifully simple little song with JT Nero strumming the guitar and Allison Russell humming along with delightful piano accompaniment. There are no actual lyrics, but it doesn’t matter. I could listen to an entire album of Allison’s voice humming over a guitar. It is brilliant, and I want more of it.

As Daisy and I walked around my neighborhood and the album played, I noted how in the background I could hear faint hints of both the legendary Chicago blues and the Montreal jazz scenes. They are blended together masterfully into a bluesy, jazzy, folky sound behind the harmonies of JT and Allison.

The album has a rich, full sound behind what are two very distinct and powerful voices. Separately, you might think that JT and Allison would not sound good together. However, JT’s rather quiet, slightly raw voice seems to be a perfect partner for Allison’s powerful, more angelic tone. The two compliment each other almost perfectly, and it is clear they are both accomplished, seasoned, performers as they seem to know exactly when to step back and let the other voice shine.

JT’s vocals come to the forefront in the song “Try,” which is stripped down to allow his voice to be front and center. While his voice is his own, something about him reminds me of a young Lyle Lovett.

In songs like “Travelers” and “Derecho,” the funk gets turned up, and Birds of Chicago show you the funky fun direction that folk music can go. I for one have become a big fan of this duo and hope they continue to push the genre into the spotlight. I think the record, Love in Wartime, is one that everybody should listen to and should be able to appreciate for all the nuances and influences seeping through the record.

Upon finishing our walk and returning home for Daisy’s hard-earned, post-walk, treat and siesta, I quickly had to hit up Google to get some background information on what has quickly become one of my new favorite duos.

Birds of Chicago were formed in March of 2012 by the husband and wife team of JT Nero and Allison Russell. Russell, formerly of the Canadian roots band Po’ Girl, and Nero, formerly of JT and The Clouds, met while both bands were on tour and began collaborating almost immediately.

By my count, Love in Wartime is the fifth album the duo has put out, and I am certainly looking forward to exploring and enjoying their earlier releases. I know for certain that Love in Wartime by Birds of Chicago is going to accompany Daisy and I on many more afternoon strolls.