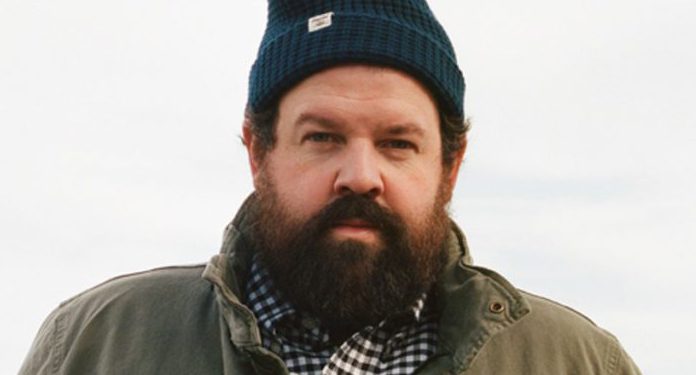 Warning! Listening to Both Ways, Donovan Woods’ new release, while driving could be dangerous. You may find yourself making a wrong turn, forgetting where you’re going, or worse, forgetting that you are even driving. If this happens, immediately pull over. Wait until your heart stops feeling like it’s coming out of your chest. Donovan Woods doesn’t sing. He quietly whispers in your ear, which somehow then sends a direct, powerful arrow to your brain and body.

At least that’s what happens to me. I’ve had Both Ways on repeat for two weeks (I can safely drive while listening now), and I still can’t get enough of it. I’ve been a fan of his for about two years after hearing Donovan Woods on CBC’s Q. I stood in front of the stage at a small venue when he came to Vancouver, and I own all of his records. He’s a fantastic singer and songwriter, and his previous albums demonstrate this, but Both Ways has something none of the others had – amazing production. For the first time, the production not only supports Donovan’s songs but enhances it. It’s the type of production that bears repeated listening, as with each listen, you will hear something you didn’t hear before, and there will inevitably be guitar fills and piano riffs and string parts to look forward to.

I’m going to have to geek out a little music theory-wise to talk about specific things that make this record so outstanding (it SHOULD win every award imaginable this year and is also a great example of why albums, a collection of songs, should still be made), so apologies to those of you who aren’t quite sure what it means that Donovan Woods often doesn’t end his melodies on the root, or that he often uses unexpected internal rhymes. In the end, that doesn’t matter at all. The songs are either Nashville co-writes or Donovan’s own originals. The fact that you can’t tell the difference is because Donovan Woods is great at both (You CAN have it both ways Donovan!)

Both Ways begins with what sounds exactly like a lone banjo, but is a four-string instrument called a Seagull M4 (kind of a cross between a dulcimer and a guitar – new to me) on the song “Good Lover.” Piano enters on the chorus, and the arrangement builds from there, adding a string section (wonderfully arranged and played on this song and others by Drew Jurecka), and building into an eerie swirl of sound. The opening lines, “How did I figure I was gonna drive home like that? / So I parked on the highway and slept one hand on a baseball bat” are classic Donovan Woods. He’s a story-teller first and foremost, but he doesn’t always tell you exactly what the story is. You can feel it though, and whatever your interpretation, (and it may change with each listening), it will be right.

“And right there on your left hand is a diamond ring, and you spin it on your finger whenever you’re thinkin,’” is one of my favorite lines in the next song, “Another Way,” about a second marriage and the hope, though doubtful, that it will work out this time. It’s with a full band plus strings, and it’s here I must celebrate the producer and the musicians.

At the helm is James Bunton (Producer of the Year in my book), who has done a masterful job of squeezing out every emotional nuance of these songs. All the other players are top-notch and are always at the service of the song; Joshua Van Tassel on drums, John Dinsmore on bass; Robbie Grunwald on keys; and the only player I was familiar with, the brilliant Joey Landreth (of the Bros Landreth) on guitars. As previously mentioned, there are little gems everywhere, mainly provided by Grunwald and Landreth. The fills that surround the vocals are perfect in themselves, never overplayed, and pop in and out exactly where needed. There’s no flash. They don’t scream out, “NOTICE WHAT A GREAT PLAYER I AM.” They don’t need to.  Kudos as well to the two mixers on the record: James Bunton and Jason Dufour.

“Burn That Bridge” was the first single (if there still is such a thing). It’s either about the beginning of a relationship or the end of a relationship.  It’s a bigger sound, more driving. Again, it builds, and builds. The bass starts to pedal over the chord changes in the second verse and, from there, the intensity grows. Drum fills enter in the second verse and crescendo to a melodic guitar solo. The piano ostinato (repeated short melody line) plays once, then repeats and then repeats over and over joined by other instruments, and its countermelody becomes a hook in itself. Donovan and singer Breagh MacKinnon (whose music I’ll have to check out) sing harmonies on the outro chorus.

“Truck Full of Money” was the second song to be released, and it has a bigger, more dynamic production approach.

“Part of the thrill is you think you might die up there,

Wouldn’t that be something to see.”

Donovan often writes songs that deal with career, love, regrets, and being on the road – obviously the subjects he lives.

“Our Friend Bobby” is one of the best songs ever written about the loss of a childhood friend, whose lifestyle led to their demise. Friends gather round and inevitably wonder if there was something they could have done to prevent it. Sparse production and an acoustic guitar part played by Landreth (tuned down and maybe in an open tuning?) accentuate the somber tone.

“Drink one for our friend Bobby,

Ran his car right off the road,

On accident? On purpose?

Even now we don’t know,

Drink one for our friend Bobby,

Open them gates and let him in,

On accident? On purpose?

Those were pretty much the same to him.”

The mostly solo guitar of “I Ain’t Ever Loved No One” (a duet with Rose Cousins, another amazing singer-songwriter), is the story of two lovers, each afraid to find out if the other feels as strongly as they do.

“And when you met my family, everybody knew that you had me wrapped.”

We know he means “wrapped around your little finger,” but in the Donovan Woods book of lyrics, that’s not necessary. It’s more fun to rhyme with the next line: “I ain’t ever loved no one like that.”

This is the sixth song on the record (out of 12), so it would be the last song on “Side One” (In my mind anyway. I don’t have the vinyl. First I need to get a turntable!).

“Side Two” opens with the “musically” upbeat “I Live a Little Lie.” “Musically” is in quotes, because although the music sounds happy, the lyrics belie that. If you don’t pay attention to the words, the music is about as happy as a Donovan Woods song can be. I can picture the musicians having a great time playing this in the studio, but can one who wins over a lover keeping a secret ever truly be happy?

The gospel-tinged “Easy Street” is an ode to the working man, a life that I suspect Donovan Woods still very much relates to.

“I Don’t Belong to You,” a blistering, tribal co-write with singer-songwriter Hawksley Workman (who also plays drums, bass, keys and banjo), is about memories, loss of innocence, and mistakes made.  One of my favorite moments of the record is hearing Workman counting the band back in before the third verse. It’s nice to know some music actually still gets recorded live.

“Read About Memory” manages to sound both simultaneously stripped down and lush. There’s beautiful keyboard work by Bunton and pedal steel (played by Aaron Goldstein). It’s one of the saddest songs on the record. How do we tell the difference between the memory of a love gone wrong and what really happened?

“I remember sittin’ on your folks pull-out couch,

You kept sayin’ it was cold, I was starin’ at your mouth,

And the more I read about memory, the less I pay it mind,

It’s just a story that we tell ourselves, or at most, a lullaby”

This is followed by an equally compelling, but even more heartbreaking companion piece, “Great Escape.”

“I don’t wanna be some great escape for you,

and I don’t wanna hold some kinda holy light for you,

But it’s nice to try”

And in the bridge, for the first time, Donovan takes his vocal up to 10, his whisper, the only time on the album he turns it into a roar:

“I can love you like somebody else loves you,

if that’s what you need,

Let me hold you like somebody else holds you,

if you don’t want me”

The dynamics in this track are so overwhelmingly emotional.  Donovan also has a moment of falsetto at the very end which gives me chills.

The last track is the perfect ending to Both Ways. It’s the most straight-ahead story of the record, leaving no doubt about what it’s about.

“Another day down, another week gone,

you can’t beg, steal, or borrow or make time”

In the hands of another writer, this familiar theme of “live for today” would be a cliché, but Donovan Woods is not another writer. Instead, each of the four verses, (which also mimic the passing of time from child to grown man with dying father), paints such a specific and intimate picture that the lyrics transcend the subject.

So what’s wrong with Both Ways? Hmmm, lyrics didn’t come with the record so I had to download them off some website and fix all the errors. I’m not thrilled about the way the voice is EQ’d on “Read About Memory.” After listening non-stop for two weeks, that’s all I can come up with.

Next time Donovan Woods is in Vancouver, I’ll be the woman up front singing all the harmony parts. I know them all by heart.