Over the Moon … with a new adventure in western music 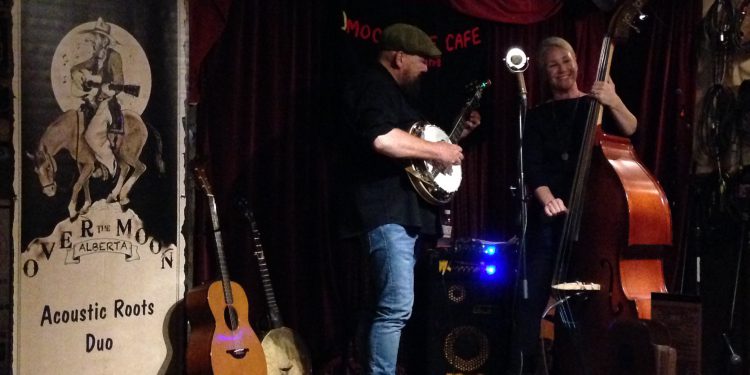 Well it was just after the full Moon in May that Craig Bignell and Suzanne Levesque came to the Moonshine Café in Oakville to show off what they’d been working on in the past while. Calling themselves Over The Moon, Craig and Suzanne are indeed over the moon about their relationship, their optimism for life and the simply wonderful music they are making together. Some might call it country music Some might call it bluegrass, or western music, but we know that with its accomplished songwriting, fantastic harmonies and great arrangements, it’s just darned good music.

The couple met by happenstance at a musical gathering seven years ago and have now been married for almost four years, but by the way they share glances while they sing, you’d think they were newlyweds. These two entirely charming and massively talented individuals now find themselves writing wonderful songs together. They pretty much finish each other’s sentences on stage. They’re that in tune.

Suzanne’s clear and beautiful alto voice seems to echo the environment of the Alberta foothills, where the couple currently lives. The crystal atmosphere and massive views of the mountains from the Longview ranch where they reside inform her sound. Suzanne grew up in the British Columbia interior and learned music from age 12, playing electric bass in her family band. Today, she plays stand-up double bass in Over The Moon and wishes she had a nickel for every time someone tells her she’s channeling Anne Murray.

Craig, who started learning drumming at age 13, has spent much of his adulthood playing percussion and drums in other people’s bands. He has played all over the world with artists such as Susan Aglukark, Bela Fleck and Vassar Clements, but Craig, who also plays banjos and guitars, was frustrated at the artistic limitations and wanted to go his own way musically. Meeting Suzanne was the best kind of serendipity. Theirs was pretty much love at first sight and “we now can tell musical stories about living in this ‘outpost’ on a ten thousand acre ranch with nothing between us and the mountains,” said Craig, who wishes he had a nickel for every time someone says he channels Tommy Smothers.

Over The Moon grew out of the immense connection between these two accomplished musicians. The first song they wrote together became the title for their first CD, Moondancer. The title for the song was given to them by their Longview neighbour, none other than Ian Tyson.

“I really like it when we make people happy,” said Suzanne.

“We have our own stories to tell and have something important to say,” said Craig. “Now we’re able to meet our audiences and other musicians and have real connections with people, something I couldn’t do playing in other people’s bands.”

In the Moondancer album, 60 per cent of the songs were co-written by Suzanne and Craig.

“The rest were favourite songs,” said Suzanne. “Songs that are meaningful to us.”

There are bluesy numbers and one that’s rather gospel, but most are remarkable for their lovely harmony singing.

The album was recorded in their home studio on the Longview ranch, south west of Calgary.

“One night, the beautiful silence was interrupted by a pack of coyotes,” said Craig, “and we had to decamp to the skinny walk-in closet because Suzanne couldn’t sing under a ‘portable isolation booth’ – a howl-muffling duvet!”

Craig and Suzanne are working on their next album now, and their live show has some very cool previews of the tunes to come. There is a song about the London wartime blackouts when not a chink of light could show from your window at night, lest the enemy bombers find their target.

“They can’t block out the moon, so you can still go out walking with your sweetheart,” Craig and Suzanne sing in perfect, creative harmony.

Craig and Suzanne also share a love for the environment. They have plans to create an organic farm in the next place they live, but also plan to go much further with this music.  Ireland and the U.K. have already discovered this talented couple, and an eighteen-day tour to China is planned for next year. They’re hoping to buy a farm of their own near Sault Ste. Marie, where the northern Ontario temperatures are moderated by the Great Lakes. Music as a career with an organic farm on the side is their goal.

The live stage performances of Over The Moon are charming and engaging. You can’t get more real than these guys, with their story songs and their way of telling wholly engaging tales that bookend the songs. Theirs is a gentle, beautiful approach to harmonies, but they have a wonderfully fun and playful side as well, heard when they sing on “You Stole My Heart.” “Tonight I’ll stay your best friend, it’s your kisses I’ll be missin’!”

Harmony yodeling, two styles of banjo, stand-up bass, guitar, great stage presence, and two amazing voices make you sit up and pay attention. In “Texas Love Song,” a cover of the Slaid Cleaves composition, they sing with wit and wisdom, “I love you even more than I love Texas.”

The audience is in stitches as Texas is rhymed with words that include perplexes, Lexus, multiplexes, solar plexus and finally ‘text us’!

It’s a very different approach to country, western, and bluegrass. These guys are the real deal and approach those musical styles in a distinct way that will steal the heart of every member of the audience. Festival artistic directors, take note!

The evolution of the house concert: Tinder-like ...