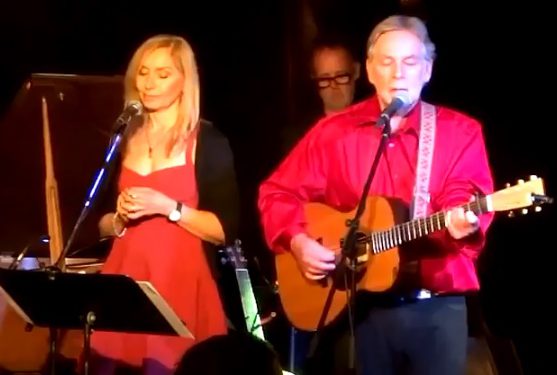 In 2014 Howard Gladstone experienced a sudden onset spinal stenosis, resulting in emergency spinal surgery.  Four disks in his neck were fused with a titanium plate.   He spent 10 days in hospital, three months in a rehabilitation centre, and a lengthy period at home furthering his recovery.  Initially totally paralyzed, he eventually regained the ability to walk and use his arms.  A songwriter, Howard initially despaired of being able to play guitar and perform.  Music eventually became both a goal and a means by which to achieve it.  He recently released his album, Hourglass, with several songs that flowed from his experience.  This article is adapted from the journal he kept during this period and after.

After the spinal surgery, I am paralyzed.  Fortunately, the cord is not severed; the injury is incomplete.  The neurosurgeon tells me it will take up to a year and a half to see what level of recovery is possible.

Playing the guitar is the farthest thing from my mind.  I block out the thought.  Now everything is shattered, it seems.  My voice is gone.

The physical therapy is difficult, but I am making progress.  A team of therapists helps me re-learn simple tasks that a child takes for granted.  The nerves are damaged or destroyed.  It seems many muscles cannot or will not recover, or will take their own sweet time. It is frustrating and occasionally depressing, but nobody gives up hope. I don’t give up hope.  Things improve at a snail’s pace – albeit, the kind of snail who would lose a snail race.

I am encouraged to play the guitar.  I resist.  Something inside says “NO! Play when you are ready, not because others tell you to.”  I don’t want to be in pain and frustrated playing guitar.  Is it insight, stubbornness, depression, or stupidity?  I don’t know.   Guitar playing and songwriting are central and important in my life, so I don’t give up the dream.  Let it rest until strength, energy, and motivation are re-aligned.

Flash-forward one year:  I can walk again.  I graduate from a wheelchair to walker to walking poles and, finally, no poles.

It is a gradual continuum of uneven, small improvements.  Even so, playing the guitar seems unlikely still.  The left hand absolutely refuses to cooperate. The fourth and baby fingers won’t bend.  The right hand and fingers are stiff and sluggish. My arms have limited strength.   I am still somewhat emotionally numb and only slowly recovering.

Day by day, the miniscule improvements continue.  After many months, a ray of light appears.  I feel ready to try to play the guitar.  I have come some distance in my recovery.  Really I have nothing more to lose and everything to gain back.  The pendulum swings.  A positive attitude and hope carry me forward.

I have long wanted to play in open tunings.  Let’s give it a try.   Open D sounds nice, with strings tuned (from low to high) to D, A, D, F#, A, D.    Playing a different way is a challenge; I need to learn new fingerings.   Good for the brain as well.

I work on Dylan’s “Buckets of Rain.”  I make some progress, but it’s difficult and awkward. I can’t get through the song initially. My hands and arms fatigue.  My wonderful harmonically rich Laskin guitar is too big.  I keep going.  It gets better.

I read a book by Dr. Norman Doidge on neuroplasticity describing how the brain can help the body heal by finding alternate neural networks.   I come to the conclusion that playing in Open D is an exercise for a brain that needs to find new channels to trigger the atrophied muscles through alternate, undamaged nerve fibers.

I discover and take laser therapy that promotes healing; it does wonders on my fingers and hands.  Combined with continuing exercise, therapy, and acupuncture, I am slowly making progress in a recovery that had seemed uncertain.  My spirits are rising.

I rework a song that eventually becomes the opening track on my album Hourglass.   It is called “My Heart Won’t Let Me Keep Still.” Here are some of the lyrics:

I’ll walk five miles when I can

Even through the driving rain

Or five hundred miles through the darkest night

To be guided towards the light

I’ll rise through the numbness and pain

I’ll move towards you again

Down the healing river to the re-born sea

Ocean wash over me

Grains of sand on dying grass

Winds rage and howl at your battered soul

Deep inside, something keeps you whole

I’ll rise once again though it takes all my will

Another song on the album, “When We Fall,” recalls this period of recovery directly:

We are so big, so small

So broken when we fall…

We are so big, so small

We climb back up when we fall

Now?  I am able to play guitar in standard tuning, but no longer use barre chords.  I feel like I’m singing, playing and writing from a deeper place.  I am very grateful and thankful for my recovery.

The album Hourglass reflects in part my healing journey and is intended to give a message of hope to those who need it.