It’s been 12 years since the last Brian Gladstone album. The new one is finally here! 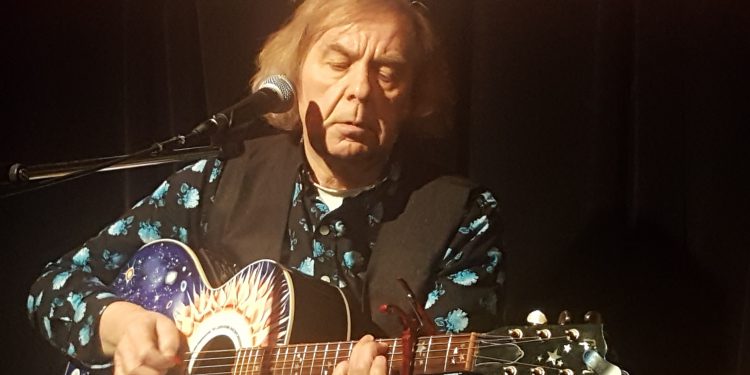 Brianology is the first album in a dozen years from folk singer-songwriter and first-rate fingerstyle guitar picker Brian Gladstone, and it’ll be released on Thursday, at Hugh’s Room Live.

Brian has been involved in the Canadian roots music scene for almost thirty-five years as an artist, performer, singer-songwriter, producer, festival director, and activist. He’s written and recorded four albums to date, all of which have garnered global acclaim and worldwide airplay. Several of his albums have been distributed by Comstock Records and Silverwolf Records.

Co-produced by Brian and the phenomenal Tony Quarrington, and recorded in Toronto, Brianology finds the artist offering 13 resonating songs that retain his peculiar quirkiness, but – as Tony notes – project “more of an element of maturity and humanity.”

Sprinkled among cheery uptempo ditties like “Don’t Bypass My Heart” – with its classic line “The days are getting shorter/take care of my aorta” – and the Canadian weather spoof “Waiting For the Summer,” are sober themes dealing with transition (“New Boy,” about the next generation who’ll have to save the planet), lost love (“Joy and Delight,” the memoir of an Irish beat cop in 1913 Toronto) and the economy (“When I Get a Dollar,” written in the
style of Woody Guthrie.)

No folk album would be complete without an ode to the romance of the road. “Going Home Down I-95” offers a trucker’s-eye view of highway life as a bold adventure full of ups and downs, and twists and turns – though our man behind the wheel stays balanced through it all.

“Patricia” is a sprightly, novelty love song that rides on some hilarious rhymes with the possessive version of the name, including “delicious” and “ambitious.”
On a much more serious note, “Behind the Maple Leaf Slaughterhouse Doors” – a vegan anthem co-written with Tony Quarrington – is one of the strongest and most heart-wrenching comments you’ll ever hear about the cruelty of the slaughterhouse.
“There are silly songs. There are socially relevant songs. There are songs that make a statement. There are emotional songs. My style is pretty well all over the map,” Brian said.

It’s a map that certainly reflects a number of journeys common to many, but simultaneously dips into fictional and realistic terrain to tell compelling stories buoyed by a simple musical backdrop.

“My philosophy at the beginning of this project was ‘less is more,’” Brian said. “The arrangements are really simple.”
When not making records, Brian founded Toronto’s Winterfolk Blues and Roots Festival, now going into its 17th year, where he is still the acting festival director. Starting as a small neighborhood event from a simple idea, Winterfolk has grown into a major event on the Toronto music scene, attracting an audience of more than 8,000 fans annually.

Brian also founded the non-profit organization The Association of Artists for a Better World, which encourages artists to use their voices to change the world. Brian has produced eight CDs under the Better World label featuring other artists, and he’s presented numerous concerts for various social causes and charities.

How Howard Gladstone came back from paralysis ...