A Generation Fell : Tony Quarrington’s For King And Country 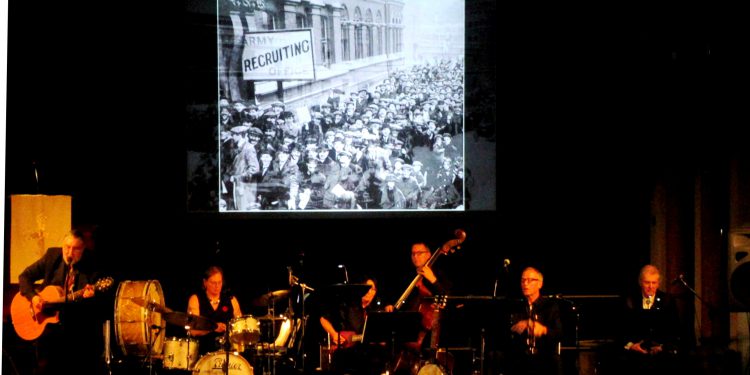 Militarism is not the fiber and fabric of social life that it was a hundred years ago in our country.  Blessedly, the only regimentation we endure these days is in our diets, and the only citations we receive are for speeding.  And the church is not the place where society holds its rituals of validation anymore, except for matrimonial and funerary ones. But, on the faces of brass plaques and gravestones, in thousands of stone chapels across Canada, the traces remain of lives lost and glories found on the battlefields of Europe. The faint echoes of those lives have regained vivid colour and antic force in a new two-act musical drama. Toronto guitarist Tony Quarrington`s For King and Country is a masterful resurrection of the presiding soldier culture that enveloped Canadian life a century ago, reaching its climax with The Great War of 1914-1917.

A combination of recitation and original music, it premiered in downtown Toronto on a drizzly evening in early May. On the broad steps of St. Andrews church, a piper from the 48th Highlanders greeted the arrival of an audience of hundreds who had come to relive the emotions of hope and horror brought on by The War to End All Wars. The church is the historical home to the 48th Highlanders, actually housing a museum dedicated to their illustrious heritage, proudly featuring the recently repatriated Vimy Cross. Quarrington, a First World War buff for over 30 years, has read extensively on the subject and incorporates an informed, multi-faceted point of view into his lyrics, written in collaboration with several of the musicians involved in the production. He has used texts and reportage from the era and his own lyrical ingenuity to revive the diverse perspectives of Prairie and Quebecois soldiers, wives and widows, and gas attack survivors, a macho gun worshipper and champion Ojibwa sniper Francis Pegamegahbow.

“I felt I was obliged to portray the futility of it all,” Tony affirmed. “I sort of tried to think my way back to someone a hundred years ago, what they were feeling and thinking and believing. But I don’t believe most of those things. St. Andrews Presbyterian is a pacifist congregation, and I’m a pacifist too. They thought they were fighting the war to end all wars, and 21 years later, they were proved wrong. ” With the huge sanctuary hushed, and smelling of hymn books and boot polish, the show opened with seven of the city’s most versatile multi-instrumentalists (Tony, Michelle Josef, Margaret Stowe, Kirk  Elliott, Andrew Downing, Stuart Laughton and Jordan Klapman) ranged across the chancel. Black and white images of battlefields were projected overhead, depicting the reality of the opening tune, “Enlistment Day.” The song is full of sincere patriotic enthusiasm, with only a terse “little did we know” to warn of what was to come.

Then the John McRae poem, In Flanders Fields, was given a new musical setting, followed by tuneful acoustic re-imaginings of the battles of Ypres, Vimy Ridge, the Somme and Passchendaele and of the suffering on the home front as well. Through the talents of eight singers – including Noah Zacharin, James Gordon and Arthur Renwick – and three actors, the production swelled the hearts and engaged the thoughts of the entire audience, made up of parishioners, veterans, theatre-goers and young inheritors of the privileges that the sacrifices of a hundred years ago have granted. The narrative moved along with a dramatic sweep, and the songs seemed uncontrived and conversational. The concluding piece, the ironically dirge-like “Armistice,” describing a scene rife with “faces full of ghosts,” preceded a stirring finale especially written for the evening, entitled “Bent On Battle.” It was delivered with transcendent power by soprano Allison Angelo, a member of the St. Andrews choir, who traces her heritage back to Commanding Officer C.E. Bent of the 15th Battalion. His gripping letter of consolation to parents who had lost a son (read brilliantly by actor Kirk Dunn) set the mood for the song. Within the echoing walls where some of the very characters of the play once sang their hearts out with praises to glory, a mingling of spirits through the dimensions of time and music definitely took place that night, sheltered by artifice from the seemingly constant condition of living in a real world at war and, by the ancient church, from the dark downpour outside.

A CD recording of For King And Country is available at tonyquar@securenet.net, which features many of the artists from the live production and also performances by Laura Smith, Jon Brooks and Mary Lou Fallis.

Broomsticks & Hammers, the Raven and the ...