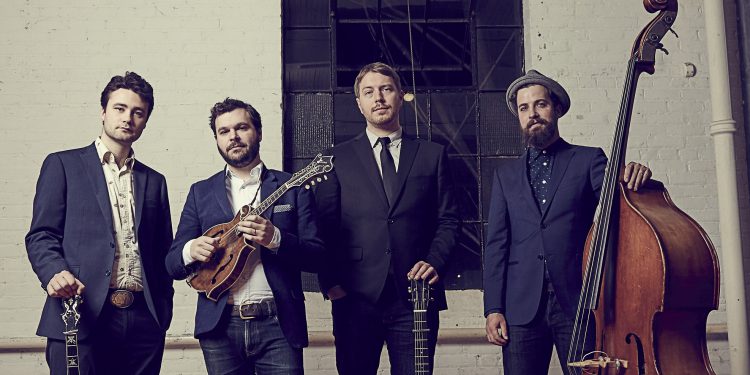 The band back when Alastair was still playing bass. Photo by Jen Squires.

Toronto bluegrass outfit the Slocan Ramblers have managed to impress everyone from old-school folkies to hipster old-time revivalists with their innovative, fiddle-free arrangements and original takes on the high lonesome sound.

All one-time students of the Humber College music program, the Slocans – who are named for a historic mine in B.C.’s Slocan Valley, where bassist Alastair Whitehead spent his summers – count among their influences lesser-known bluegrass great Dave Evans and celebrated player Norman Blake.

Torontoist named them the Best New Artist at the 2013 Toronto Jazz Festival, and Bluegrass Situation called them one of the Top New Discoveries of the 2014 Folk Alliance Conference.

In fact, their performance of “Abide with Me” on that show caught the attention of Don Cherry, who, in turn, talked up the band to Ron MacLean during Coaches Corner on Hockey Night in Canada. If that’s not the ultimate prize for a Canadian band, we here at Roots Music Canada don’t know what is.

Their new album, Queen City Jubilee, showcases the mature sound the band has developed after four years of hard work on the road together.

“It’s really the culmination of our growth as players individually, as a unit, and as writers,” Adrian Gross told me by email this week. “It features more original song-writing and lots of obscure gems that we’ve uncovered over the years. It was recorded (mostly) live off the floor as a band, and we really tried to capture the high energy live show that is the defining feature of our group.”

The Slocans have agreed to premiere three songs from the new album exclusively on Roots Music Canada. Here’s what they have to say about each one:

“This one was written by our banjo player, Frank, and features him playing his clawhammer banjo in a crazy tuning he made up just for this tune. He wrote it at around 5 a.m. on a flight up to Iqaluit in Nunavut, where we [were] booked to play the Alianait Music Festival. The (only) beauty of flying that early is you often get a whole row to yourself, so while the rest of us slept, Frank wrote this tune.”

“This is an old song, and a bit of an obscure one as far as bluegrass classics go. We got it from the great Dave Evans, the powerhouse, tour-de-force, musical equivalent of a tornado ripping through your town. He passed on last year and is one of the ultimate unsung heroes of the genre.  Check him out. Did I mention I’m a fan?

We wanted to put a few tunes on this record that were just straight up bluegrass presentations, with no real arrangements to speak of. This is one of those tunes.”

“We had a lot of fun arranging and recording this one, which we first heard sung by Roscoe Holcomb, (the high lonesome sound embodied in a man), but written by Barbecue Bob in the 20s. We were all pretty excited by how this track turned out.  It’s got the off-the-cuff energy of our live shows, which is something we always try to capture in the studio.”

Broomsticks & Hammers, the Raven and the ...