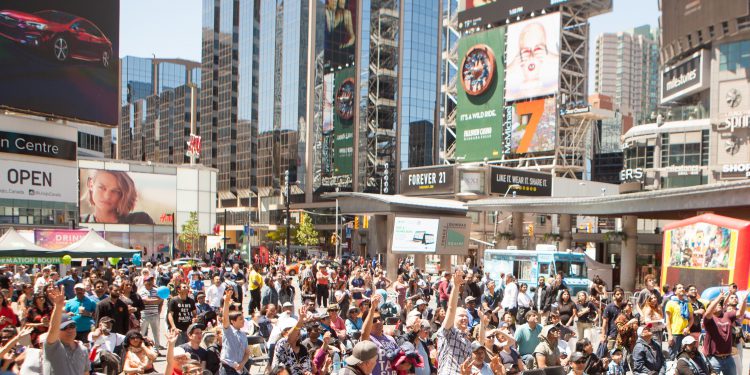 Founded in 2006 and heading into its twelfth edition this year, Toronto’s DesiFest is a one-of-a-kind celebration of South Asian music, food and culture. It’s hosted over 150 artists and performers so far, and this year’s line-up includes notable names in the community such as Roach Killa and Parichay. In what is perhaps the first time in the festival’s history, though, the headlining act – The Mad Band – is set to perform a tribute to the late Pakistani musician Nusrat Fateh Ali Khan.

Recipient of the UNESCO Music Prize and two Grammy nominations, Nusrat Fateh Ali Khan was the most notable qawwal singer of his time and has been cited as an inspiration by the likes of A.R. Rahman and Zayn Malik, among others. And while it’s been more than two decades since his death, Khan continues to be celebrated for songs such as “Mere Rashk-e-Qamar” and “Allah Hoo Allah Hoo” even today.

Ahead of the festival, we got in touch with the founder of the Mad Band, Saad Arif Tauseef, to learn more about the band and its tribute to Khan saab.

RMC:  How did the band get its name?

Saad: The name comes from the parent platform, which is Madnetism Arts Inc. We chose the name in light of the society finding extremely creative artists, eccentrics and their perspective to life very odd and interesting, and in layman terms, the adjective used is often “mad” at times.

RMC: Can you tell us more about the band’s members?

Saad: The Mad Band comprises of rotating artists, singers and musicians who are part of the Madnetism Arts Inc. who come together as concerts and festivals get planned around the country. There’s no band leader, and the band works on chemistry between all the creative people involved in the process. I am currently the creative head of the platform and arrange all the music and sets with the singers and musicians.

RMC: What do you think of the DesiFest, and is this the first DesiFest you’re performing at?

Saad: DesiFest is a breath of fresh air in the South Asian music scene in Toronto every year. Not only does it explore all the different genres of music within the South Asian community but sets a perfect stage for the aspiring artists of the GTA so they can showcase their talent and upgrade their performance portfolios!

Some of the artists, like Shehryar Ahmed, Anoos, Ali and I have performed at Desifest as solo artists, but we are coming together this year to bring a bigger and more explosive arrangement to the stage.

RMC: What is the significance of an event such as the DesiFest to members of the local community? Why would you encourage people to attend the festival?

Saad: We often find South Asian events around the GTA which are directed to a certain faith or part of the community, making these events not too inclusive. The best part about DesiFest is that you can see all the South Asian community come together to experience and celebrate some amazing singing and musicianship.

RMC: How were you first introduced to Nusrat Fateh Ali Khan’s music?

Saad: I attended a concert in my hometown, Islamabad (Pakistan), when I was a kid, and Nusrat saab was the headliner in that concert. Even though I was a kid, his music still connected to me on a level that cannot be easily explained. From religious events to national events, the music of Ustad Nusrat Fateh Ali Khan was always in the limelight; the trance and whirling of dervishes in the shrines of saints on Nusrat saab’s melodies and radios in every shop and every car playing Nusrat saab’s qawwalis has been part of my early childhood memory that is just irreplaceable.

RMC: Which is your favourite song by him and why?

Saad: I think “Dam Mast Qalandar” is one qawwali that sums up everything about Nusrat saab’s work. The spiritualism, the vocal techniques used, the composition, as well as the lyrical weightage in this qawwali makes it the most perfect mix of Ustad Nusrat Fateh Ali Khan Sb. to date.

RMC: What has the process of preparing for the tribute been like, and what is different, or what would you say is the highlight, of your act?

Saad: Since Nusrat saab’s music was mostly in the qawwali genre, we had to recreate the music with multiple vocals, keeping the soul of the music and with that, giving it a fresher, newer feel. The mix involves hip hop beats, synth pads, arpeggiators, combined with some guitar playing and tabla/dholak playing; everything will be played live on stage with seven vocalists singing a non-stop 30-minute set dedicated to Ustad Nusrat Fateh Ali Khan Sb.

Ustad Nusrat Fateh Ali Khan has undoubtedly left the world with such rich music that even after he has left us, the celebration, the trance, the peace, and the learning from his music never stops. The Mad Band decided to give Nusrat Sb. a tribute but this time, with a desi urban twist. We are very excited to headline this year’s Desifest and can’t wait to take the stage for all our attendees!

RMC: Could you tell us more about the songs by Khan saab that you will be performing as part of the tribute?

Saad: I have arranged 14 tracks of Khan saab in our 30-minute non-stop set. They include sufi tracks like “Mast Qalandar” and “Allah Hoo,” trance numbers like “Sanware,” “Piya Re,” and romantic melodies like “Afreen,” “Mast Nazron Se” and many more.

RMC: What is the future of the Mad Band?

Saad: My vision of creating the Mad Band is to create [a] transitionary band for upcoming artists to learn, collaborate, and make music in an extremely creative environment, and once they are ready for the market, take a step forward and go solo with their music endeavors. The Mad Band will always remain in the picture, but with newer faces, fresher arrangements and more unique [creative] outputs in future stages.

Gospel in the heart of Saskatchewan: ...