Louisiana to Quebec: the music of David Greely, Claude Méthé and Dana Whittle 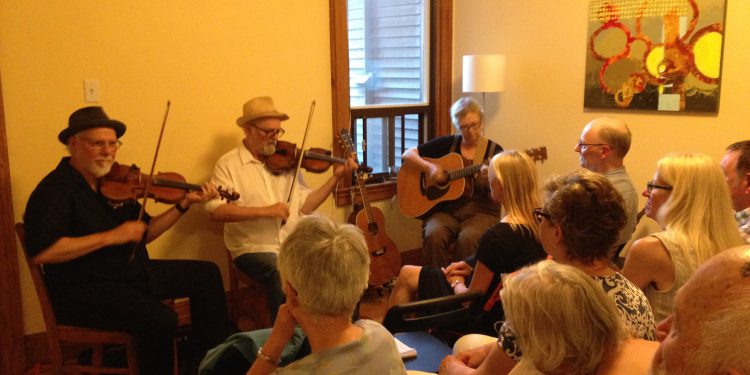 The roots of the project go back centuries; in the mid-1700’s, when French people living in Acadia (today’s Maritime provinces), were expelled by the British during their military campaign against New France. Le Grand Dérangement resulted in over eleven thousand Acadians being deported. Thousands died, many from disease or drowning when ships were lost.  It was a huge tragedy for Acadians, whose families had been living there for generations. Survivors ended up widely dispersed, some to present day Québec, Prince Edward Island, Cape Breton Island, France, England, Maine and Louisiana.

David Greely, through his mother’s line, can trace his ancestry back to 1661, to the French Catholic colony in Louisiana. His Acadian ancestors brought their tunes and songs with them on the expulsion ships, and, in Louisiana, they found kinship with the black slaves, who were permitted there to do ‘whatever they wanted’ on Sundays, which invariably included making music from their African traditions. Both oppressed cultures found common ground, and out of those gatherings emerged Zydeco (the Creole word for Beans). David plays Cajun music, Cajun being a contraction of the word Acadian, and continues the tradition, researching old music, performing and teaching, with a resumé as long as your arm.

Claude Méthé only recently discovered his own Acadian roots, though you might say that it was not surprising. He lived for eighteen years in the Lotbinière region south of the St. Lawrence River near Québec City, where he had a longtime friendship with his musical mentor, legendary fiddler Aimé Gagnon. Living today in Lanaudière region, northeast of Montréal, Claude and his musical and life partner Dana Whittle are in the epicentre of Québecois traditional music and culture, where many people can trace their ancestry right back to the Acadians. Like David, Claude also has an extensive resumé, as he has founded and performed with many of the most influential traditional music bands in Québec over the years.

In 2017, David and Claude had several informal meetings and found they enjoyed playing together, finding the linkages between their musical cultures. Cajun and Québecois share roots in Acadian culture, and though the styles are immensely distinct, you might say that there is a genetic link that makes them a natural fit.

The two fiddlers concocted a series of unique shows called LATOQC, and their current tour is about half completed. We were fortunate to catch the show at a really intimate house concert in Toronto.

It’s a very fun concert: beautiful music, artfully arranged, showcasing both Cajun and Québecois tunes and songs from David and Claude, along with terrific original compositions from both fiddlers. They quickly learned to play each other’s style, and when sitting side by side, fiddles in hand, with similar hats, beards and spectacles, you just know that they were meant to play together.

There was an energetic version of “Reel Issoudun,” in a very interesting two-part fiddle harmony with obvious Cajun influences.  David played a fascinating Cajun waltz that he said “goes back through the keyhole” to another age of southern dance hall existence.  Dana said she was completely spoiled by the musical experience of two fiddles in harmony accompanying her song “Les Abeilles,” a love song inspired by beekeeping.

Claude, Dana and David sang a wonderful Creole French song that is purely acapella, an ancient song with no instruments, just voice, podorhythm (foot percussion) and clapping. It evoked the traditions of the expelled Acadians who largely had to continue their musical traditions with their body as the sole instrument.

David’s Cajun “Danse à Limonade” spoke of a hangover cure, and later, his waltz “La Toussaint” evoked the All Saints Day, where the tradition in Louisiana has you venerate your ancestors by freshly whitewashing their above-ground tombs and laying flowers.

There is no such thing as below-ground burial in a region where the water table lies very close to the surface of the land, and there is no burying of either the musical traditions or the intergenerational trauma of the Acadian expulsions, trauma which, lying just beneath the emotional surface, still informs both Cajun and Québecois cultures today.

It’s pretty cool to witness a musical reunion of these long lost cousins. Somehow, hearing these disparate musical styles come together gives us hope in a world where cultural genocide and the wholesale expulsion of populations is still taking place.

Matt Anderson rocks out with The Mellotones ...

Piper and Carson capture sounds of the ...