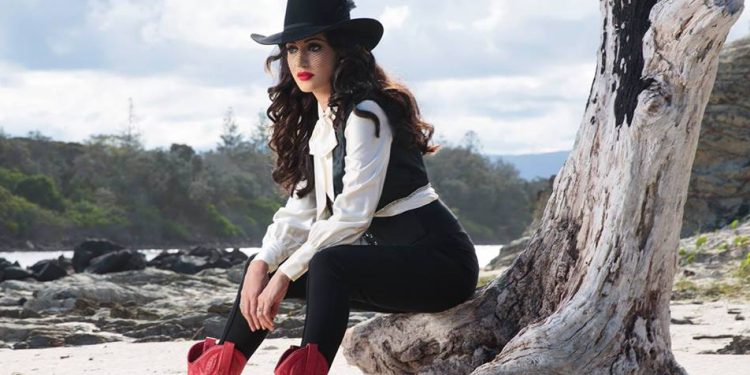 Taking her palette from the tonalities of spaghetti cinema for her fifth full-length album, newly resettled Calgarian Lindi Ortega has counter-balanced her move back north from Nashville with an ardent candy-skull crush on her paternal southern homeland of Mexico.

Liberty is a concept album, and it pictures Ortega deep inside of several dark identities, building into a three-tiered border opera. She rides in with gongs a-blazing on an Ennio Morricone fanfare (that occasionally verges on Danny Elfman territory). With the scorching guitar of Toronto string slinger Champagne James  Robertson, and EDM levels of bass from Mike Rinne, offering bold backup, Lindi stakes out a powerful persona: the broody romantic madre tierra on her moonlit hacienda terrace, swathed in pedal steel raptures that swoop like theremins, moaning her soft and sinuous glissandi, and threatening her bad hombre boyfriend, “Don’t come any closer to my heart / if you’re afraid of the dark.” Other compadres along for the fiesta are Blonde On Blonde alumnus Charlie McCoy on harmonica and exotic local Nashville hybrids Steelism, whose evocations of 60’s soundtracks haunt the disc. Did we mention that when Paul Corby’s not writing for Roots Music Canada he also paints? He even painted Lindi Ortega!

Midway into the record, the badass cowgirl of the cover art arrives, in a violent awakening reminiscent of Tarantino. Rock and roar takes over for an episode, filling the air with gunshots and whiplash and dispelling madre Lindi’s chronic piquant darkness. “There’s justice to be served, “she intones in a whisper on “The Comeback Kid,” a survivor scenario of supernatural menace.

Then she transforms, again, into the alluring loteria mermaid icon, La Sirena, chanting love songs from deep inside her rippling cenote, “away from the lightning and rain.” Committing to love, freedom and the pursuit of happiness, Lindi floats along on moods and fragrance instead of drums for awhile, her voice honeyed with a filmy diaphanous vibrato and shimmering mariachi horns. Returning to full exuberance in a dusty poncho and her ravaged but sturdy little red boots, Ortega rallies to hope on the title track, “Liberty,” and the album then concludes with an elegiac exhalation of Mercedes Sosa’s hymn to this worldly existence, “Gracias A La Vida.” Lindi`s exit is gracious and grateful, and the cactus and sagebrush point her onward to the beckoning horizon.

Liberty is on her own Shadowbox label. Lindi Ortega is on tour in Europe throughout the month of June.

Matt Anderson rocks out with The Mellotones ...