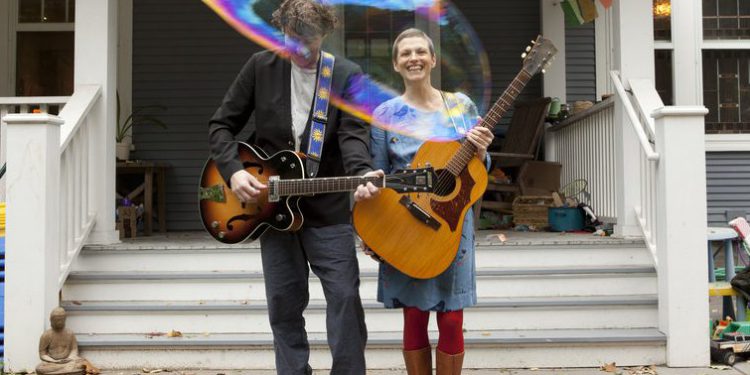 There was no marching band. The stage lights were set to “on.” There were no backing tracks, no auto-tune or costume changes. No vocal gymnastics or endless melismas (many notes for one syllable. Think Whitney Houston). There WAS heartfelt, straight-forward singing (in tune), beautiful songs, unrehearsed stage banter, set list spontaneity, and even (god forbid!) a few mistakes. Welcome to The Weepies.

I was late to The Weepies. Not the concert, but discovering them. Their name had been on my radar through former ASCAP executive Brendan Okrent, but it took until 2014 for me to seek them out. The first song I heard was “World Spins Madly On” from their 2006 album, say I am you, (Nettwork Records), and that’s all it took for me to go down The Weepies rabbit hole. They released two albums before say I am you and three after. The album Sirens and a Deb Talan solo record, Lucky Girl, were both albums dealing with Deb’s bout with breast cancer (and recovery from).

The Weepies are Deb Talan and Steve Tannan, two singer-songwriters who came together for the music, married, and had three children. They are each exceptional artists and, in the band, are showcased on their own and together, with intertwined vocal harmonies and guitar parts. It’s easy to see why they were drawn to each other. There is a “through-line” between their individual styles, and the only clue to guessing which one was the primary songwriter is by who is carrying the lead vocal. Both are poetic, original lyricists, and as their name suggests, even the happier songs have a tinge of melancholy. I wouldn’t say the sum of the parts is greater than the individuals but the whole is definitely magical.

The Weepies came on stage with a bass player, drummer and backup singer. The show featured various combinations of this ensemble from solo performances, duos, trios and the full band.  This was my first time hearing them live, and the only disappointment was with the sound. Whether it’s an innate problem of McIntryre Hall or the particular sound man, sadly the bass was mainly a boom-y rumble, and the over-bright drums a distraction. My favorite moments were sans rhythm section. The addition of the extra female vocalist didn’t add a whole lot either. No complaints with the musicianship of any of the three, and with better sound, it could have been as great a listening experience as the records they produce, but the most important element of The Weepies is the songs, and the vocals of Deb and Steve, and that’s what I came to hear.

There’s something about Deb Talan’s distinctive voice that shoots like an arrow to my heart. I never grow tired of listening to her sing, and it’s such a welcome relief from the overblown female vocalists typically heard on mainstream radio. She switches between 2 guitars, one in an open tuning (I think Open D but the high E left alone) and the other in standard tuning.

Steve Tannan is warm, goofy and familiar, and though not a guitar whiz in the Eddie Van Halen sense, his playing is tasty, soulful, and just right for the music. He had an array of acoustic and electric guitars, each one chosen to fit the song. Listening to them made me think about the singers you hear on The Voice and American Idol. Accolades are given to the flashiest vocalists, and while I don’t deny their technique, singers like Willie Nelson, Billie Holiday, Bob Dylan, and Kurt Cobain would not even pass the auditions. Everything the Weepies do is in service to the song, the opposite of what The Voice and American Idol-like singers are about. For those singers, the song is the vehicle to show off their chops.

I couldn’t say what the highlights of the concert were because truthfully, every song was a highlight. The Weepies are a welcome and much-needed antidote to the over-produced and formulaic music so prevalent everywhere we go.