Christa Couture talks getting world famous … for her pregnancy photos 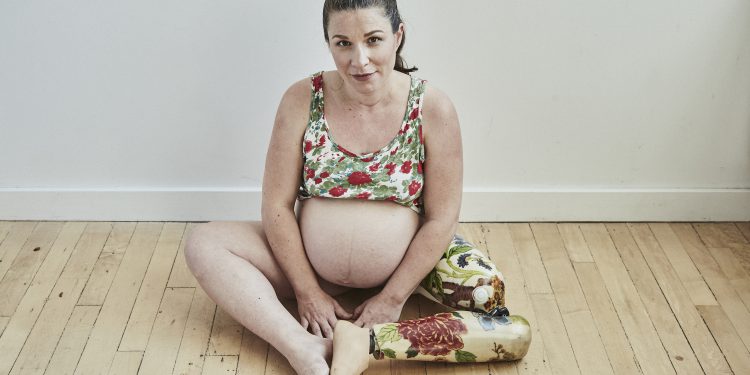 Fans, friends and colleagues of Christa Couture have been doing a lot of this lately: “Wow! Christa’s in the Daily Mail!” “Holy Shit! Now she’s in the Independent!” “Oh look, she’s in MetroUK too!”

Since she first unveiled her pregnancy photos a month ago, photos that celebrate her body, with and without her ornate prosthetic leg, her images have gone viral, showing up with astonishing regularity in our Facebook feeds.

As anyone who knows Christa knows, the fame couldn’t happen to a nicer person, nor one more deserving of a positive break.

Christa’s need for the prosthesis derives from a childhood battle with Ewing’s Sarcoma, which cost her her left leg at the age of 13. If that weren’t enough suffering for one lifetime, she also endured the loss of two young children under separate circumstances.

And yet, for all the heartbreak she’s survived, many people will tell you that Christa is one of the kindest, most caring and most organized people they know. The expensive, high-tech microprocessor knee in her prosthetic leg was paid for by a crowdfunding campaign put on by fans and friends, which raised more than $25,000 for her – a testament to how much she is loved in Canada’s roots community.

Here at Roots Music Canada, we decided to check in with Christa and see how she’s feeling about all the new attention – especially since many musicians only dream of getting that kind of attention for their music.

While we were at it, we asked her what went into making the photos too.

1. How did the idea come about to do this photo shoot?

I was thinking about doing a photo shoot just for myself, of my pregnant body, and started googling disability and pregnancy. The results were disappointing, meaning there was just very little out there. The idea started then to go into the photo shoot with the intention of making them public and the intention of being explicit about having a disabled body.

2. The photos are both pretty and very real. They are not super “glam.” Was it important to you not to “airbrush” the experience of pregnancy, so to speak?

It was important to me to not have maternity photos that were too “glowy,” which was mostly an aesthetic choice – I just didn’t want to go for the warm, fuzzy preggo photo shoot which feels a bit eye-roll-y to me. I wanted my body to look natural and be captured as it truly is.

3. How does the global, viral reaction to the photos compare to the response you imagined getting when you created them? How did you THINK people would react?

I did not expect the reaction they’ve received at all. I figured my reach on social media would like it, and my mom would share it; I figured I’d reshare it a couple times and then move on. I’ve never had something take off before I even got to spread the word myself really. Instagrammer Mama Caxx somehow got hold of it and shared it – a lot of the traction on Instagram came from her and her followers. It’s amazing to try and connect the dots when something takes off like this.

4. How does it feel, as a singer-songwriter and musician who has worked in relatively obscurity for years, as most do, to suddenly find yourself featured in major international news outlets and all over social media for … your pregnancy photos?

It is funny that after ten years of working hard to basically get people to pay attention to me that what sparks interest is when I take my clothes off. Ha. Maybe that’s not surprising. Though I say that jokingly and know that the pictures aren’t just your average babe in her undies, because disability is almost never portrayed as sexy. But it’s true that likely none of the new followers I have on social media have heard any of my four albums. To them, I’m Pregnant Disability Advocate. I don’t mind, I can be that person. But it is funny to work so hard at something that doesn’t catch, and then have one unrelated thing I do spread like wildfire.

5. Have you found yourself having any concerns about how your disability or disability in general is being treated in the coverage?

Not yet. Surprisingly, even The Daily Mail managed to stick to the tone of the original piece I wrote – which was to speak to being empowered by representation. That said, I’ve been avoiding reading the comments or digging too deep into the coverage, in the interest of self-preservation.

6. What kind of responses have you had from other mothers with disabilities, and other people for that matter?

The best responses have been from other people with disabilities. A couple moms shared their maternity photos with me, many expressed they’d done something like mine while they had the chance. A woman from India, also an above-knee amputee like me, wrote to say she’d never had kids, but seeing my pictures gave her a sense of what her body would have gone through. The responses have all been positive. I expected something like that from other people with disabilities, but I didn’t expect such a warm response from non-disabled folks, too. What I’ve learned from that is that everyone is hungry for seeing difference represented, no matter what body they’re in.

7. Have you seen a spike in your music sales?

I haven’t checked! No one is ordering CDs. I know that much. But in a month I can check streaming. Maybe there’s some Spotify plays coming out of this.

8. What would you say has been the best and worst part of this experience?

The best part has been feeling supported for being vulnerable and being thanked by my community (disabled folx). The worst part is kind of a familiar feeling – that one part of my self, one part of my experience, is being extracted and highlighted to the exclusion of the rest of me.

9. What do you hope people take away from seeing these photos of you?

10. How are you doing? How is motherhood treating you?

I am exhausted to my core, but enjoying these early months with my daughter so much. Motherhood is as hard and rewarding as everyone says. I know it’s not something everyone wants, but I really did, and I feel so grateful to have the messy beautiful challenge in my life right now. She’s just such a magical creature! And one day she’ll be a magical creature who sleeps through the night.

The Fretless: Where a string quartet ...